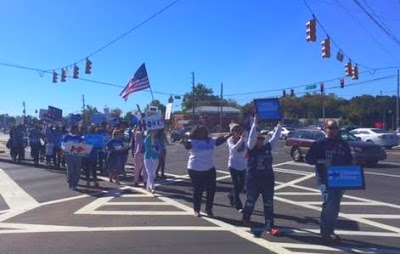 Democrats in Cobb County, Georgia organized a rally in support of Hillary Clinton. (Madeleine Deisen/YJI)
MARIETTA, Georgia, U.S.A. – I spent some time last weekend proudly standing on a busy street corner with a sign that said “Stronger Together” in support of my candidate, Hillary Clinton, a Democrat running for president of the United States. 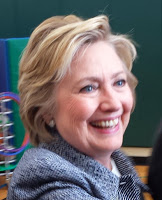 This election season, in which Clinton is facing off against Republican Donald Trump, has frightened me.

Trump and his words have astounded and angered me. His threats to our democracy and our citizens have made me feel, at times, hopeless.
But this election season is more than that. 2016 may be the year when the United States of America elects a woman as
our president for the first time.
This thought fills me with hope for the future: Hillary Clinton could be our country’s next president.
She will defend the rights and freedoms of women as she has countless times in the past. She will work to help women achieve success through closing the pay gap, working for parental leave and childcare, and defending Planned Parenthood and women’s health.
But perhaps most of all, Clinton will show women that we can, in fact, rise to the most powerful position in this country.
At a time when Trump objectifies and demeans women, Clinton has risen above his painful and insulting words and actions. It is my hope that she will rise all the way to the White House and be the first woman to sit in the Oval Office.
On Election Day – November 8 – I want to be proud of my country when we elect our first woman president.
I want to send a clear message to those who seek to divide our country: America stands with her, and we are stronger together.
Madeleine Deisen is a Reporter for Youth Journalism International.
***
Your generous, tax-deductible support makes it possible
for students worldwide to have a voice. Thank you.
HelpYJI.org