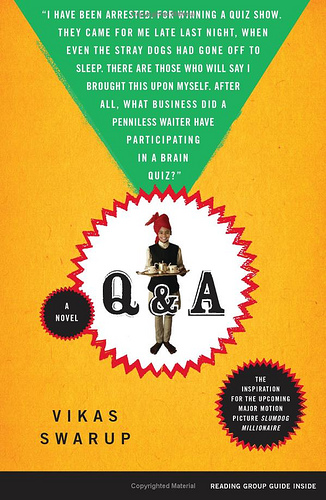 WEST MIDLANDS, England – Given that “Slumdog Millionaire” was nearly about to make it straight to a DVD release, some could say it was a miracle that it has now secured its place in history.

Indeed, the incidents that author Vikas Swarup tells us in Q & A: A Novel – the story on which “Slumdog” is based – are also perhaps nothing short of miracles.

However, any book is a series of coincidences, the 13 or so incidents that shape Ram Mohammed Thomas’ life are brought about in a way that makes the book a thriller, a love story, a story of life and perhaps most significantly, a story of hope.

Each chapter regales to the readers the story of how he can answer the questions on the Indian version of “Who Wants To Be A Millionaire” – a show that has the same hype around it in India as the Super Bowl.

Using this device, Swarup turns the 360-page book into a masterpiece of storytelling.

The book is a bestseller in the Indian subcontinent, yet hasn’t had the same reception in the western world as one would expect with the release of “Slumdog Millionaire,” and it’s about time that it did.

The way Q & A: A Novel explores the reality of India has brought it criticism and acclaim. Indian media didn’t like the way it focused on the brutal, yet real, side of India. The media also didn’t like the fact that the book concentrated on Indian officials working with beatings and bribes, or the religious riots that took place not so far back, nor did it like the fact that prostitutes and poverty were very much discussed.

Then there was the side of the Indian media that went into a hype about the fact an Indian writer (a diplomat by day) had written a bestseller went on to be the basis of an Oscar winning film.

The truth is, the book deals with the delicate nature of the story better than the film, with many lines of hidden humor that weren’t incorporated into the film. With many scenes and characters changed, the film doesn’t do justice to the way the grit, determination and hope shape Ram’s life.

Mumbai’s passion for bustling life and the sweat of the city are knit together and injected into Ram’s story, with not one moment passing which you won’t enjoy, with perhaps a few tears, if you are of that type.

Many say that a film never does justice to a book, and perhaps quite rightly so, for this certainly is the case here.

Owing to the film’s success, Q&A: A Novel is now going to be sold as “Slumdog Millionaire.” Perhaps the revenues will increase, but the way Swarup has dished out a piece of ‘slumchic’ deserves individual recognition on a global scale.

A.R. Rahman did India proud winning two Oscars, one of them for a song entitled ‘Jai Ho,’ simply meaning ‘be victorious.’

I hope Swarup is victorious, and Q&A: A Novel isn’t known simply for the film, but for its own merits.

It’s quite simple – did you enjoy the film? Of course you did. We all did. Who doesn’t like the story where the underdog wins and love triumphs?

Now go and relive the magic and read the book – it has more spice, it has more sugar, it’s chaotic yet organised; fast-paced, yet won’t burn away in your memory.

Upasana Bhaumik is a Junior Reporter for Youth Journalism International