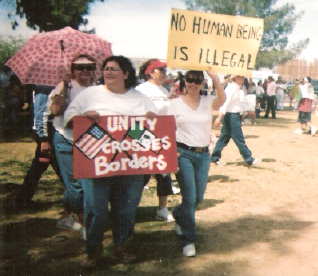 TUCSON, Arizona, U.S.A. — Thousands of Arizona youth demonstrated peacefully last week against a proposed crackdown on illegal immigrants – and many walked out of their schools to take part in the protests.

The students walked out of their schools to demonstrate their opposition to possible changes in federal immigration laws that would, if adopted, make it a felony to be in the United States illegally – or to help someone who is in the country illegally.

Nogalas took part in the Friday walkout that included students from Cholla High School and Pistor Middle School. He said that, were it not for the Mexicans, “There would be no one to do the jobs the white people don’t want to do.”

On Wednesday, March 29, about 275 students walked out of their classes at Cholla and Pueblo high schools “to express their opinions regarding the much-publicized border/immigration issues,” wrote Roger Pfeuffer, the Tucson school superintendent in a letter to parents that day.

Two days later, Pfeuffer wrote parents again, saying that more students had walked out, but that school staff had accompanied them to the protests “to promote responsible behavior and to maintain their safety.”

Some of the student protestors said the proposed changes to immigration law was wrong, but offered few specifics. Others said they didn’t know what the protests were about but went along because their friends did.

But many of the young demonstrators said the United States should be open to all immigrants from all countries, especially Mexicans who came in search of work to care for their families and pose no threat to American citizens.

The energy of the protestors was electrifying. Thousands of people of all ages and races gathered under the warm Tucson sun, waving flags and carrying signs.

Viridiana Celaya, 18, of Desert View High School, attended the rally on Sunday. She said that the Mexican people have worked hard enough to have earned their place in American society.

“I’m here representing Mexicans in America,” said Celaya. “I think it’s going to be counterproductive [to deport the Mexican immigrants]; they don’t appreciate everything the Mexicans have done.”

But Droegemeier said she does not agree with the way the students are protesting.

“I think it is very important to speak out and to express themselves, I just don’t think this is the way to do it,” said Droegemeier.

According to Tucson Police Department spokesman Officer Frank Amado, the demonstrations on proposed immigration laws have been the first major youth protest in the area since the Chicano movement in the 1960s.

According to Amado, the protests have been fairly safe. One middle school student was struck by a car during a walk-out last week but sustained only minor injuries.

“This is not merely a local phenomenon, but a national, historic event, and similar protests are occurring in many cities nationwide,” wrote community leaders in an April 1 letter to area residents.

The letter, penned by Congressman Raul Grijalva, an Arizona Democrat, many school district superintendents and others, said that they would take steps to provide discussions, forums, debates and panels in the schools on the issue of immigration.

The letter also noted that Arizona high school students were scheduled to begin three weeks of standardized testing starting this week and that students who were not there to participate in the tests “may not graduate.”

Mark Kepler from the Tucson chapter of World Can’t Wait – an organization dedicated to driving President George Bush from office using a variety of social and political issues including immigration – said when young people have the opportunity to speak out, they should do it.

“When they’ve got a chance, they’ve got to move,” said Kepler. “The people in Congress don’t respond to phone calls and emails. They only respond to taking it out to the streets.”

Droegeneier suggested that students write letters and discuss these issues in class, but refrain from marching through the streets as a means of demonstrating their opposition to the new immigration laws.

“We’ll talk when we get to the Federal building,” Kepler said.

Alkhansa el-Bedawai is a Reporter for Youth Journalism International.