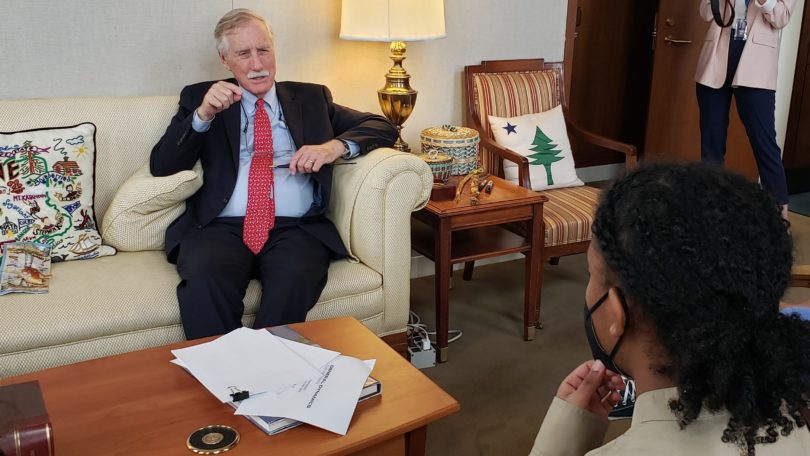 Washington D.C. – As the Russia-Ukraine conflict intensifies, the Biden administration is setting a new precedent with intelligence transparency, according to U.S. Sen. Angus King, a member of the Senate Intelligence Committee.

In a recent interview with Youth Journalism International, King, an independent senator from Maine, detailed the limitations and the interests driving this new transparency.

“This administration has released more information and intelligence than any prior from my experience,” said King, who has served on the committee since the Obama administration.

The committee is a small, bi-partisan group of U.S. senators who get access to highly classified information.

Since the war began, journalists produced photos of Russian tanks in Ukrainian cities, videos of landmines and stories of fleeing families, providing a plethora of information. The American government echoed this transparency by alerting European allies to Russia’s possible invasion, leaking satellite images and troop estimates.

Before Russia invaded Ukraine, King said, the United States released information about the location and actions of Russian troops. He said this was an important part of preparing the world for the invasion.

In order to declassify some intelligence, the Biden administration had to challenge previous practices in the intelligence community and within the capitol.

“The intelligence committee tends to hug information,” King said.  “They often classify things that don’t need to be classified.”

While the Biden administration has released intelligence to allies and the public alike, this is done with consideration for national security.

“It starts with our own national interest,” said King. “We share information when it is consistent with our national policies.”

There are limitations to intelligence transparency. Protecting the intelligence community’s “sources and methods” is a primary concern.

King said when information is released to the public, this provides an opportunity for our nation’s adversaries to learn about our methods of gathering intelligence.

When releasing intelligence, it is critical that the integrity or confidentiality of sources is not put at risk, he said.

“The danger is that you don’t want to compromise how you learn things,” King said.

According to King, the Biden administration is committed to supporting Ukraine while protecting its own interests.

Information should be declassified, King said, as long as “it doesn’t compromise sources and materials and it will be helpful in furthering national interest.”

Lyat Melese is a Senior Reporter with Youth Journalism International.