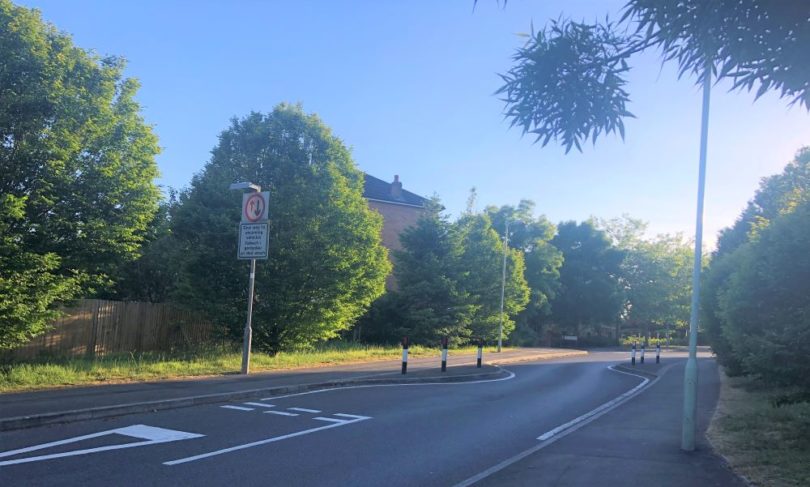 Streets that often are busy are quiet during lockdown in South Wales. (Holly Hostettler-Davies/YJI)

Bridgend, South Wales, UK – People in the UK went into lockdown on March 23. Government guidelines clearly stated, “you should not be visiting family members who do not live in your home” as part of the rules.

But almost two months later on May 22, news broke that a senior advisor to Prime Minister Boris Johnson wasn’t following those rules.

According to news reports, Dominic Cummings traveled 260 miles from his home in London to self-isolate on his family’s farm in Durham amid worries over childcare for his young son should he and his wife fall ill.

This has caused a huge outbreak in the British media, with many people questioning whether or not Cummings should resign from his position.

Johnson appeared in the coronavirus daily briefing and publicly stood by his adviser on May 24, claiming that Cummings “acted responsibly and legally” as he “followed the instincts of every father.”

This upset many parents who were in the same situation as Cummings yet stuck to the strict lockdown rules and stayed at home, with them believing that the prime minister was now insulting their behavior as responsible parents.

It also raised questions of whether they were able to follow their own instincts and disobey lockdown rules without punishment.

While Cummings argued that his actions were taken to protect his family, it is difficult to understand how traveling to a residence 260 miles away from his London home was the best way to protect them.

In a public statement May 25, Cummings said his wife had fallen ill and they were concerned that if they both become unwell, they’d be unable to look after their child. However, they were never tested for covid-19, nor did his wife display the main symptoms of the virus. Without even trying to find emergency childcare in London, the statement said, the family traveled up to Durham where they didn’t even receive childcare in the end.

What Cummings did was wrong, and it seemed that he was able to follow one set of rules while everyone else followed different guidelines.

The whole situation has insulted the thousands of people who have stuck strictly to the guidelines regardless of their own personal circumstances.

Lots of people have been unable to spend time with their dying family members and Cummings’ seemingly arrogant decision to break his own lockdown rules has raised many questions of the government’s response to the situation.

In a time where clarity and togetherness are so important, the government has failed so many people.

Some people fear that Cummings’ actions have “unlocked” lockdown rules and many people will see it as an opportunity to break the rules themselves, and all the progress and sacrifices that the UK have made will be lost.

She, too, was asking the question of why it’s one rule for the government officials and another for the general public.

“At the beginning of the pandemic we were told that we were all in this together, all experiencing the same trauma. That is clearly not the case,” she said.

McAndrew then went on to describe her own personal experience. She and family wanted to help her sister, who was isolating with her partner and their children, one of whom has special needs.

“We desperately want to go to see her, offer her some respite and support. Both her and us have accepted that can’t happen,” said McAndrew.

For many families, including McAndrew’s, being able to travel to get childcare from family members not in the same household would make the situation a lot more bearable, but the law was clear and stated that people had to stay home.

When asked what she thought Cummings should do, McAndrew said, “The right thing for him to do would be to apologize and resign. It is the only way to move on.”

I agree with this. A resignation would provide the public with the acknowledgment that staying at home is still necessary and would hopefully help the people who feel so insulted and let down by the Cummings’ actions.

We are in the middle of a global crisis, one which the government has the responsibility to help control.

The law should apply to everybody, not just those who are in privileged positions.

Holly Hostettler-Davies is a Reporter with Youth Journalism International.