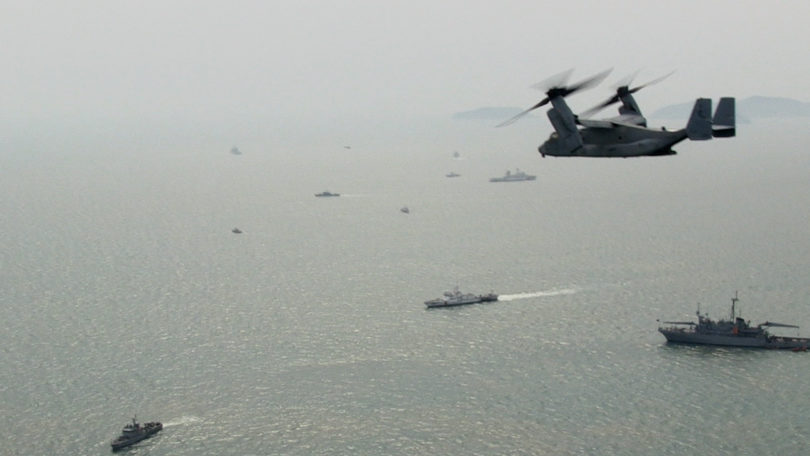 Searching for survivors (USMC)
SEOUL, South Korea – Never has been an incident so controversial, that it literally brought the entire nation into silence. But as there is never complete silence in the world, listening more thoroughly, I could hear the faint dins that persist in their own way.

And what I find frankly more astonishing about the Sewol ferry is not the horrifying tragedy itself, but the reactions of people towards it.
It is truly amazing to see fellow students respond to the incident in radically different ways.
Whether the news was a huge war or a vicious scandal, we typically exchange one or two words about it, and return to our ordinary lives. It’s embarrassing, but I must say we felt distant towards the events themselves, as if we were viewing a scene from a movie rather than acknowledging it actually happened.
But the Sewol ferry incident was different. Knowing that more than 200 high school students were trapped in the boat was chilling.

We could have been the ones inside that same boat and that realization simply shocked everyone. The school was hushed for many days, and we would go on for the entire class time mourning the deceased and feeling helpless in the end. Until this point, we were all the same; it was what came next that was noteworthy.
There were some students who were merely absorbed spectators. They walked away without remorse after watching the flying debris.
Of course, this time they may have lingered longer because of the severity of the loss, but for them it was more like a saucy rumor that riveted them to no end. They would swoosh through the crowd, enjoy the “liveliness,” and depart.
This does not mean they do not have any sense of grief towards the victims – it is merely that their yearning for news overweighs the sorrow.
There were some who used this incident to attract crowds to be in the spotlight, endlessly posting quotes intended to ensure “people” that they are “enlightened” and “responsible,” they wish to get support and applause.
When there are no remarks or comments left that fulfill their moral superiority and high ground, they badger others until they are satisfied with the half-hearted wonder at their novel opinions. They attempt to steal the deserved concern of the heartbroken families to themselves.
Then there were some who were genuinely mournful of the misfortune and wished to play a part. They would search hours and hours, send relief food, and pray for a miracle. It is the ideal image of a caring citizen, and many take the mask of these students for a while.
And there were others who were convinced of the rumors that were spreading on the internet. They would rage on and on about the controversies, ending with criticizing the government of its impotence. They could not distinguish valid, truthful facts from those inclined to spread false but provocative “truths.”
And I stand here, wondering and confused about who I am.
Am I the indifferent bystander? Am I trying to squeeze through to the limelight? Am I the mournful citizen? Or am I another fanatic confident that there was something more to the
tragedy? Frankly, I do not quite know.
But what I know is that the whole country is to an extent bewildered just as I am, and we need something concrete to hold onto.
Min Joo Kim is a Junior Reporter for Youth Journalism International.