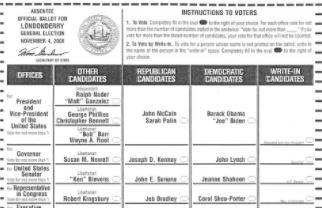 GERMANY – Generally, I would say I am interested in politics. As a young American living abroad in Germany, I want our country to be led by people who know what they are doing.

I’d like these people to somehow find a way to end the financial crisis. I’d like them to improve America’s image oversees. I’d like them to finish the job in Afghanistan and Iraq properly. I’d like them to take global warming seriously and finally sign the Kyoto Protocol – and I would love them to be able to handle a crisis as well as Bill Pullman in Independence Day, or Harrison Ford in Air Force One.

So when I received my absentee ballot, I went over everything I know about John McCain and Barack Obama and realized that, truth be told, it was not much.

But how to get to know my two newly proclaimed best friends?

My name is Katie, not Joe, and I’m a high school student, not a plumber, so I guess I’ll have to watch TV instead of talking to the candidates personally.

Here in Germany, the only international station we get is CNN International and I do spend a lot of time listening to the pundits’ analysis of the candidates.

I read the papers, German and American. I read Time magazine religiously. And still I get the feeling that the media, no matter how unbiased they claim to be, all are biased in some way and we never really truly get to see the “true” candidates.

We are always influenced. Whether by the media, our parents, our teachers or our friends, we can never really escape it.

I could read their platform online, but I have to admit that I don’t have the time, don’t have the attention span and really don’t believe that they worked that all out themselves. They have advisors to do that for them. I could watch the presidential debates, but I simply just understand too little about politics to know if what they are saying is good or bad beyond what others say about it and the intuitive feeling in my gut.

And, eventually, that is all it really comes down to for me. A feeling.

So, finally, I confined myself to, what to me, living abroad in Germany and therefore not as directly influenced by domestic political decisions as most of my fellow Americans, is the most important issue – namely the United State’s international image.

I want America’s reputation to drastically improve in Europe and I want people to speak of America without mentioning all its faults but rather praising its good traits and achievements.

That’s when I opened my eyes and, not free of the influence but at least knowing that I am under the influence, so to speak, cast my vote.

Katie Grosser is a Junior Reporter from Germany for Youth Journalism International.