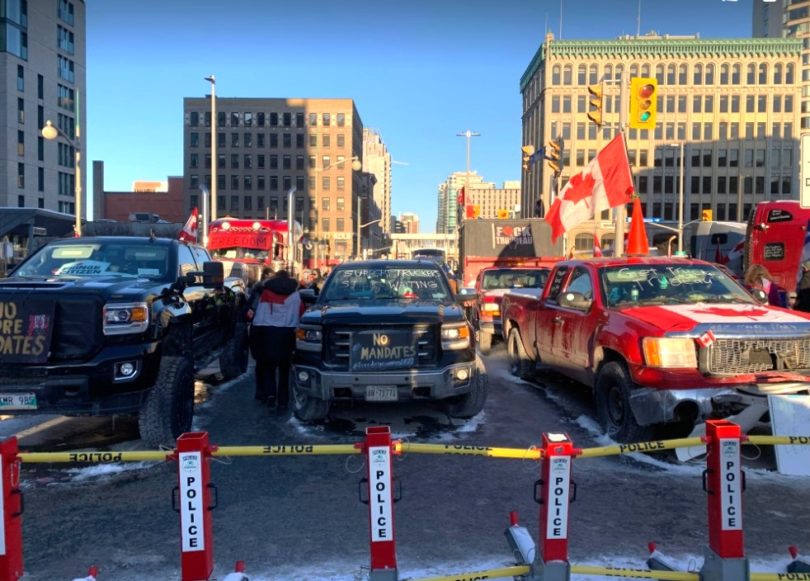 Vehicles on the street in downtown Ottawa display messages from protesters. (Selvaganeshamoorthi Balakrishnan/YJI)

Ho Chi Minh City, VIETNAM – When thousands of trucks and protesters first entered Ottawa’s Parliament Hill over a week ago, they faced no pushback.

Though they had no permit, honked horns, and blockaded roads and bridges, their protest of covid-19 restrictions and vaccine mandates went uninhibited.

The protesters dubbed their demonstration a ‘Freedom Convoy,’ and until recently, they were allowed to continue protesting, in the spirit of free speech.

Such is the modern Canadian way. I’ve always been proud that in the balance between free speech and its limitation, Canada usually leans towards the former.

This seems especially clear to me now because though Ottawa is my hometown, I currently live in Ho Chi Minh City, Vietnam.

Contrary to Canada, Vietnam favors public order over free speech.  A protest like the ‘Freedom Convoy’ would never be allowed to take place.

But the ongoing trucker protest is unprecedented in its aggression, forcing Canadians like me to rethink the limits that come with freedom of expression.

This is because Canada’s lenient approach relies on protests being reasonably non-disruptive and peaceful, and the ‘Freedom Convoy’ is neither.

The incessant honking of truck horns disturbs the peace, and daily life for Ottawans has been disrupted by blockades and unruly mobs. Police in Ottawa said they have opened around 60 criminal investigations connected to the demonstration, including into potential hate crimes.

I also find it ironic that the so-called ‘Freedom Convoy’ is robbing other Ottawans of their freedoms.

Mayor Jim Watson told CBC News that locals feel like “prisoners in their own homes” and are harassed on the street.

This behavior may force Canada’s politicians and law enforcement to adopt a stricter approach towards future disruptive exercises of free speech.

So as they continue their parade of dissent, I can’t help but worry that the Ottawa truckers have forced Canada to tighten its grip on free speech.

Arisu Babakhani is a Junior Reporter with Youth Journalism International. She wrote this commentary.

Selvaganeshamoorthi Balakrishnan is a Correspondent and Senior Photographer with Youth Journalism International. He took the photo.

Read a news story about the protest by a YJI student in Ottawa.

No end in sight for Canadian protest of vaccine mandates