TURLOCK, California, U.S.A. — Ever heard of Claudette Colvin? I didn’t think so. The chances of recognizing that name are about as slim as me singing in pitch. But that’s a different story.
How about Rosa Parks? Now, if you didn’t recognize THAT, then I have something very special to recommend. It’s called a history book.
That’s right. Rosa Parks has gone down in history as the courageous African American woman who sparked the Civil Rights Movement in the 1950s.
We’ve heard countless times that she refused to give up her seat on a Montgomery, Alabama, bus that fateful day and was arrested by the police. Thus began the infamous bus boycott.
Do I sound like a history teacher yet?
However, we overlook the contributions of other, unnoticed men and women who were also tired of being treated like second-class citizens, who were also up to there with all that segregation nonsense. 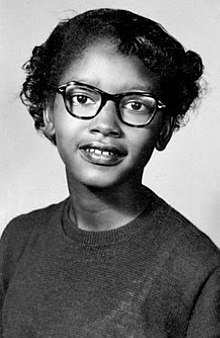 Did you know that Claudette Colvin refused to give up her seat to a white passenger on a Montgomery bus nine months before Rosa Parks? She was only 15 years old at the time, a junior at Booker T. Washington High School. She, like Parks, was pulled off the bus by policemen and hauled to prison.
So, then why do we revere Parks, and not Colvin?
Colvin was pregnant and too young to be a “martyr” for the cause. Third, many civil rights leaders thought that she was too dark-skinned to be an effective campaign poster girl. (And we’re still talking about the civil rights movement, right? The one pursuing the whole “colorblind” shebang?)
Parks, in contrast, worked for the NAACP. She was demure and quiet, unlike Colvin, who scratched and clawed when police arrested her.
The fact is that Parks had more media appeal than Colvin. End of story. Now, onward to the moral of my story.
My point isn’t to prove that Rosa Parks’ act was undeserving of praise nor is it to prove that Colvin should have been the real “hero.
In fact, Rosa Parks is one of my greatest role models. She was a remarkable woman and, undoubtedly, worthy of all the praise she garnered. And so is Colvin. It takes much humility to step down from a chance at fame.
My point is that we are all heroes.
We all have the potential to change the world, whether its by mowing a neighbor’s lawn or catalyzing a national civil rights movement.
We are all Rosa Parks. We all leave our marks on someone’s history with our acts.
Yet we are also Claudette Colvin. The world will not always notice what we do. We must gain satisfaction from what we do, not what comes as a result.
And you never know. One act might change the world. So take a chance, jump at every opportunity.
One act is a pebble, but sometimes it becomes a mountain.

Michel Lee is a Reporter for Youth Journalism International.