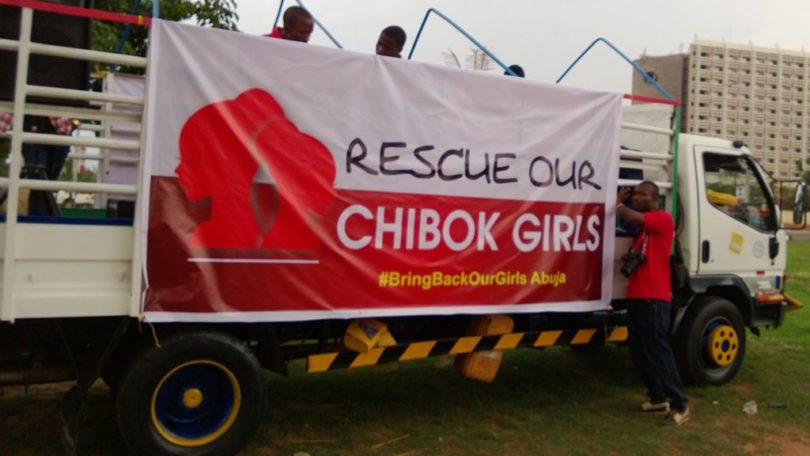 (VOA photo)
NSUKKA, Enugu, Nigeria – As we approach national elections next week, it is crystal clear that politicians have not been working assiduously towards the release of the Chibok girls who have been held prisoner by the hardline Boko Haram terrorist group since April 2014.

Instead, they have been busy solving the political mathematics that would see them cruising to victory, leaving the parents of the missing girls to depend on a litany of unfulfilled promises and, of course, a steady diet of news like the fiasco that was supposed to be a ceasefire.

Following the string of attacks in the northeastern part of the country, Boko Haram ramped up its attacks and ignited global outrage when they abducted more than 200 girls from the Chibok community.
Since then, the people of Chibok have been consumed with grief and hopelessness runs through the veins of the girls’ parents. The only question perched on their lips is: Will our girls ever be freed?
Frankly, the federal government has not tackled this issue seriously. They have not lived up to the expectations of the parents who had given them a vote of confidence concerning the return of their daughters.
Instead, the federal government, which is supposed be the Moses that should free the Chibok girls from the bondage of the pharaohs of Boko Haram, has not done anything.
Some hurl criticisms at President Goodluck Jonathan for keeping mum concerning the girls’ abduction. Responding to critics in an op-ed published in The Washington Post, an American-based newspaper, the president wrote: “My silence has been necessary to avoid compromising the details of our investigation.”
Silence? Yes, silence! Jonathan’s silence has led to the death of some of their parents, because according to Al Jazeera, at least 11 parents of the Chibok girls have died since the kidnapping. Four died of heart failure while the other seven perished after an insurgency attack in a nearby village of Kautakari last July.
Jonathan’s silence probably turned our girls into slaves in the clutches of these criminals. His silence shattered the dreams and hopes of the schoolgirls, who may have been planning to go on to university.
In the blink of an eye, Jonathan’s silence manifested with the news the parents most wanted – the ceasefire deal. The deal proposed an exchange of the girls for incarcerated members of Boko Haram.
After the ceasefire news broke, Nigerians were in high spirits. Parents were happy and hope shone on our faces. We thought the girls would finally reunite with their families and loved ones.
But to our chagrin, the ceasefire deal was a complete fiasco. Some Nigerians opined that the deal never existed, because some days later, the terrorists killed scores of people in Adamawa and Borno states. An end to killing should be one of the requirements for a ceasefire deal, shouldn’t it?
The failure of the government to bring Boko Haram terrorists and free our girls birthed the popular international #BringBackOurGirls hashtag on social networks. The hashtag sparked global outrage toward finding the Chibok girls.
From Pakistani child education activist Malala Yousafzai to U.S. First Lady Michelle Obama and Nigeria’s own Oby Ezekwesili of the Open Society Foundation, the campaign to create awareness about the missing girls has garnered international recognition. The hashtag, which has been tweeted more than a million times, spurred the government to find the missing girls.
Some considered the #bringbackourgirls campaign the most productive and biggest hashtag activism in recent times, but as time went on, the effort that had once swept the globe dropped
from view.
Hope flickered again when military experts and negotiators from the United States and the United Kingdom, China, France, and Israel came last year to help Nigeria find the girls.
Still, they are missing.
Ten months have now breezed by without a clue as to the whereabouts of the schoolgirls. I cringe when I remember that the government has not done enough to get these girls back to their parents.
Christmas came. We had our Christmas chicken without the missing girls and we danced to rhythmic Santa Claus tunes without them.
But we should not only blame the government. Citizens, too, bear responsibility for relenting in the struggle to get our girls back.
Since the April 2014 kidnapping, campaigns and protests have grown silent and many people are not taking this issue seriously.
It isn’t until we take on our full responsibility to keep up this challenge that our girls will come back alive.
Festus Iyorah is a Reporter for Youth Journalism International.
***
Your tax-deductible contribution can help support Festus Iyorah
and other students at this nonprofit at
www.HelpYJI.org