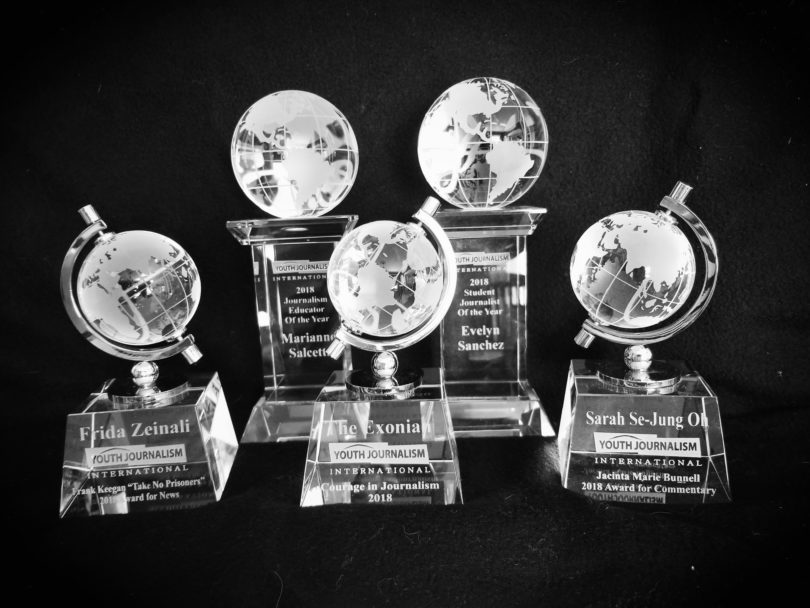 Auburn, Maine, U.S.A. – Now in its ninth year, Youth Journalism International’s annual awards contest unearths some of the best writing, photography and art by teens around the globe.

A surprised Evelyn Sanchez wiped away tears as she received the 2018 Student Journalist of the Year trophy while her Indiana classmates crowded around her. 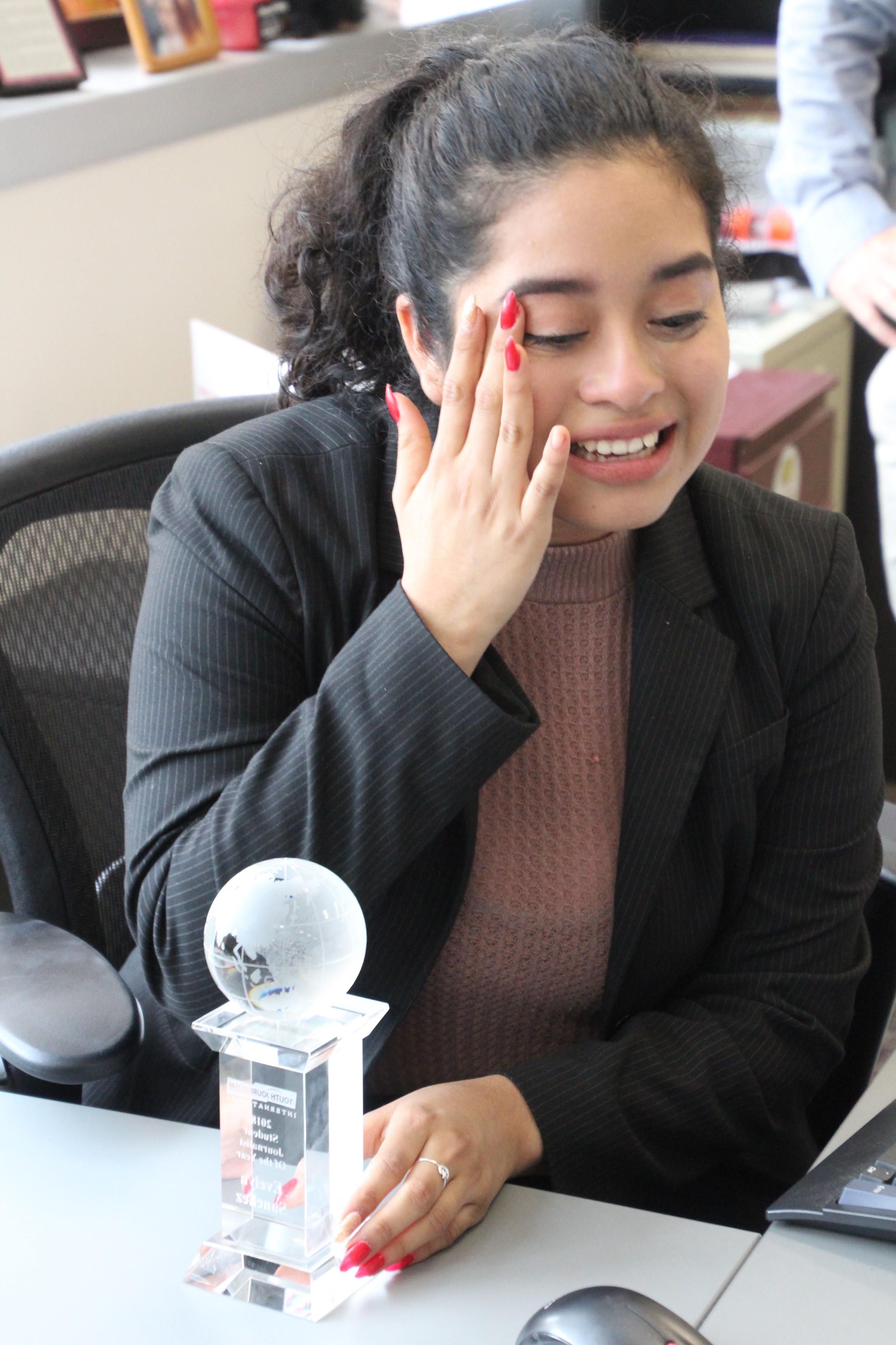 Evelyn Sanchez with her 2018 Student Journalist of the Year trophy. (Photo by Katie Kelley of Ben Davis High School, used with permission.)

“I just love telling everyone’s story,” said Sanchez, who plans to study journalism at Indiana University.  Journalism can be a great career, she said. “It’s not really selfish. You’re doing it for others.”

Marianne Salcetti, who won the 2018 Journalism Educator of the Year honor, embodies that spirit, having spent her life in the profession as a reporter, editor and teacher.

“She has truly shown me that nothing worth doing is easy. Especially journalism,” said Vasas.

Salcetti, who is leading her students in a right-to-know court battle to compel the city of Keene to release public documents, said, “I’m always about speaking truth to power.”

She said the best journalism has always nudged and even pushed the arc of justice.

Frida Zeinali, a high school student in Tabriz, Iran, won the top newswriting prize, the Frank Keegan “Take No Prisoners” Award for News, for her story about how air pollution sickens people.

“People often get used to inequity. They tend to ignore injustice since it’s easier for them, whether it’s a seemingly harmless side-eye or authorities’ failure in meeting their trust,” said Zeinali. “This indifference frightens me. I believe this fear is the trigger behind my efforts for trying to bring a voice to the unheard.”

The two other trophies went to Sarah Se-Jung Oh of South Korea, who won the Jacinta Marie Bunnell Award for Commentary and the staff of The Exonian newspaper at Phillips Exeter Academy in New Hampshire for Courage in Journalism.

Twenty seven contest judges – including many media professionals – selected winners in more than two dozen other categories. A complete list of winners, with comments from judges, is below.

Two of the judges, Eugenia Durante and Michelle Harmon, said they “saw the heart and verve of young writers who took on controversial issues their generation inherited. Each entry spoke for a cause experienced in local communities and mirrored by global ones. We were so impressed by the writers’ courage and bravery to speak long overdue truths. These pieces were no small feat, and we encourage all writers to take note from these brave individuals.”

Several of the judges said selecting the winners wasn’t easy.

“These were tough choices,” said judge Wendy Riling. “The talent of these students is fantastic!”

Lynn Abrahamson, a longtime judge, said, “I continue to be amazed at the talent, creativity, and resourcefulness of the young writers.”

Those earning 2018 awards in YJI’s Excellence in Journalism contest represent six countries on four continents as well as 23 U.S. states. Winners of the top five categories received crystal trophies and all winners get custom-made award certificates.

The non-profit Youth Journalism International has been educating the next generation of news professionals since 1994. Formally incorporated in 2007, it is a 501(c)(3) educational public charity. Its website can be found at youthjournalism.org.

The contest covered work published in English during 2017 for non-professional student journalists aged 19 and under. 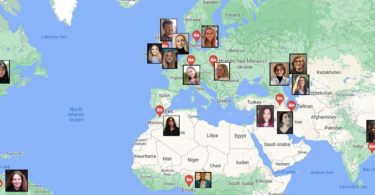