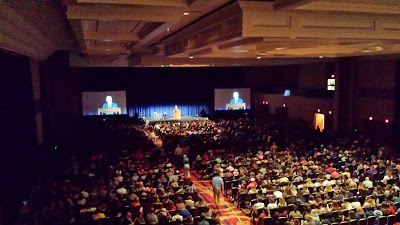 An overflow crowd of student journalists and teachers filled a Washington, D.C. hotel ballroom to hear legendary journalist Bob Woodward deliver the keynote address at the National Scholastic Press Association. The students greeted Woodward with a standing ovation. (YJI)
WASHINGTON, D.C. – Young reporters need to get out and talk to people if they want a good story, legendary investigative reporter Bob Woodward told a crowd of student journalists.
“The best source of information is people,” Woodward said in his keynote address at the National Scholastic Press Conference last week.

“Go to the scene,” Woodward said. “There’s always a scene to go to.”
As journalists, “we don’t show up enough,” said Woodward. “You have to get your ass out of the chair and go see things.”
Woodward, best known for being one of two Washington Post reporters who investigated and unveiled the 1970s Watergate scandal that led to the resignation of former President Richard Nixon.
Now an editor at the newspaper, Woodward is also the author of 15 non-fiction books – all of them national bestsellers – and is widely regarded as one of the best journalists in the country.
But as a young reporter in 1972, just months before writing his first Watergate story, Woodward learned his lesson the hard way about going to the scene.
Woodward told students that he wrote a story based on information from a reliable source. The source told Woodard that the Mayflower Coffee Shop had failed a health inspection because of “horrific” conditions. He wrote the story about the coffee shop in the fancy Mayflower Hotel and filed it.
A city editor asked him if he’d ever been to the coffee shop.
When Woodward said no, the editor suggested, “Why don’t you get off your ass and go visit?”
When he did, Woodward discovered that the Mayflower Hotel had no such coffee shop. The closed down Mayflower Coffee Shop was instead in a Hilton hotel. He went back to the office and corrected his mistake.
Woodward told the students to look to witnesses, documents or whatever they can get their hands on, because there’s always something.

“I have never heard of a story where there’s no source of human beings, no source of documents,” said Woodward. “Your job as a journalist is to present the facts.” 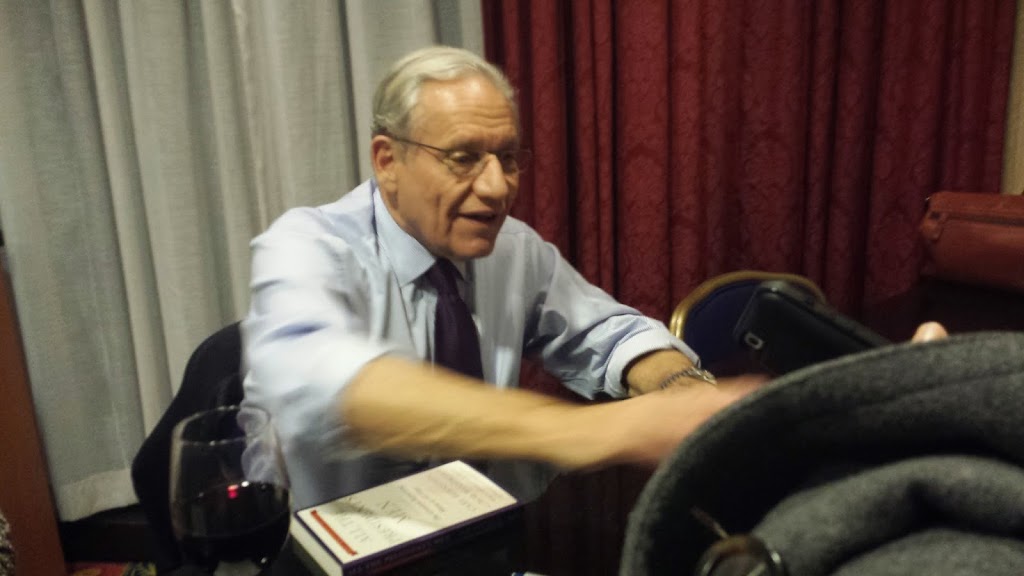 He emphasized the importance of this in America.
“This is the wonderful part of this country,” said Woodward. “You can ask about anything!”
He stressed the importance of doing research, especially before an interview, and advised going beyond a simple Google search.
“There are no boundaries,” he said, when it comes to getting information.
Looking up the person to be interviewed and researching their work shows that you “take them as seriously as they take themselves,” Woodward said, adding that he once sent President Obama a 15-page memo outlining what he wanted to talk about before their interview.
Woodward also talked about where to draw the line. He said that while it’s important to pursue a story, something that violates privacy and isn’t something that the public needs to know is not worth it.
He talked about the ever-increasing presence of political bias in cable news channels, calling out networks like Fox News and MSNBC.
Along with giving journalism tips, Woodward reminisced about times from his iconic career.
He told the audience that one of his great regrets was the slip-up with Janet Cooke, a reporter who made up a story about a child heroin user that he, as an editor, failed to catch. The story, published in 1980, won a Pulitzer Prize, which the embarrassed Washington Post had to return.
He talked about his interview with President Ford, some 25 years after Ford pardoned Nixon for his role in Watergate.
In multiple interviews, Woodward repeatedly pestered Ford for the reason why he granted the pardon.
Exasperated, Ford told Woodward he was bored with the question, but the reporter told the former president that he still hadn’t answered it.
Then, Woodward said, Ford opened up.
“I did this for the country,” Ford told him. As president, he didn’t want the nation to be hung up on the scandal, which would surely have dragged on for years without the pardon. Ford also told him he wanted his own presidency, not one mired in the drama of Nixon and Watergate.
It was not the answer Woodward had expected at all.
“This is one of the things about journalism,” said Woodward. “You are often surprised.”
One of Woodward’s last pieces of advice was not a journalism one, but rather a humanitarian one.
“Always remember, others may hate you, but those who hate you don’t win unless you hate them.”
Mugdha Gurram is a Reporter for Youth Journalism International.
***
Your tax-deductible contribution can help support this nonprofit at
www.HelpYJI.org