Here are links to the stories included in this package:

NEW YORK, N.Y., U.S.A. – A sea of people flowed from block to block at the 9/11 Memorial site in Lower Manhattan on Sunday, all marking the 10th anniversary of the terrorist attacks. By Emma Bally, Reporter

GRANVILLE, Ohio – Last week in my college political science class my professor passed out a sheet of paper with a question: “What comes to mind when you hear the word Arab?”  By Jessica Elsayed, Senior Reporter

DELRAY BEACH, Florida – Thomas Panevino was in his seventh grade Spanish class in Manhattan the morning of Sept. 11, 2001, when he heard the booming sound of an approaching airplane. By Cresonia Hsieh, Reporter

DELRAY BEACH, Florida – Last week, a lot of teachers tried to get me and my classmates to really think about and discuss the September 11 attacks, but they didn’t get very far. We were six years old then, and no one could remember much. By Cresonia Hsieh, Reporter

Mourning And Memory A Decade After 9/11

TORBAY, England – I was far too young to really remember it. The first memory I have of 9/11 is from Sept. 11, 2002, a year on, of the news reporting the one year anniversary and my parents explaining what happened on that horrible, painful day. By Adam Kelly, Junior Reporter

CAIRO, Egypt – Ten years ago, the whole world watched in horror – no, shock – as the twin towers of New York’s World Trade Center collapsed to the ground, taking everyone inside with them. By Lama Tawakkol, Reporter 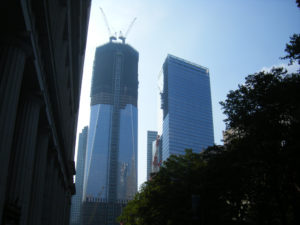 AMSTERDAM, The Netherlands – I still remember how I learned about 9/11. When my father came home, he immediately turned on the TV. On the screen, smoke was rising from two large buildings. My father phoned people, asking them if they’d heard. I knew it had to be serious. By Caroline Nelissen, Senior Reporter

In the days and weeks after the September 11, 2001 attacks, Youth Journalism International students kept churning out dispatches from around the world.

DHAHRAN, Saudi Arabia – Though I was only in the second grade on Sept. 11, 2001, the catastrophes of that day remain the most significant events so far in my life. By Evan Pogue, Junior Reporter

Where Is Osama Bin Laden Now?

Not America’s Tragedy, But A World Tragedy

YEREVAN, Armenia – It was a sunny day and people were coming back from their workplaces. It was morning in New York, but already evening in Yerevan. By Narine Daneghyan, Reporter

Finding Solace In Springsteen After 9/11

Youth Journalism International writers trying to come to grips with the terror attacks a decade ago found some solace in an album released in 2002 by rocker Bruce Springsteen.

FORT WORTH, Texas – Ten years ago, I was an 8-year-old fourth grader in a small elementary school in Warwick, Rhode Island. In small towns back east, everyone knows everyone and nothing exciting usually happens. By Mariah Pulver, Reporter

Ten years ago, another generation of Youth Journalism International students got a note from an editor shortly after terrorists steered a second plane into the World Trade Center, begging them to write about their thoughts and reactions. A handful responded.