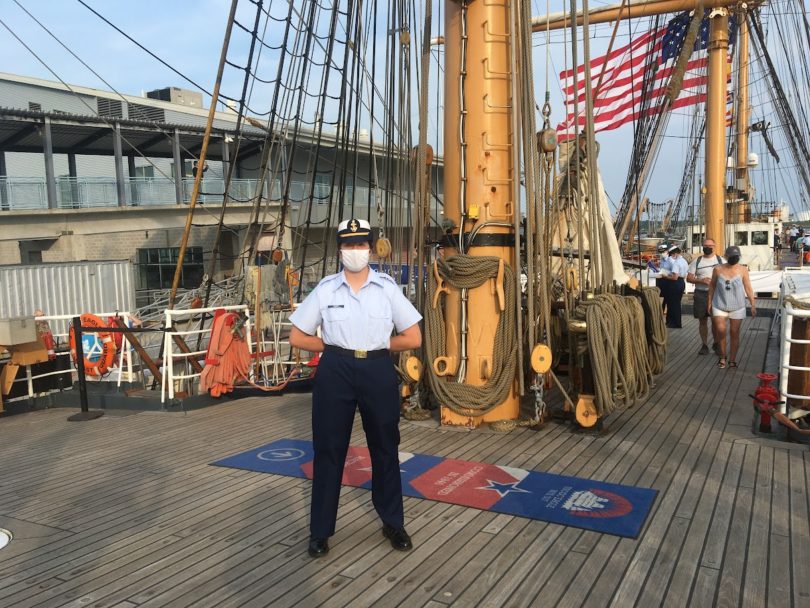 Portland, Maine, U.S.A. – Imagine choosing a life where you must adopt strict new habits in dining and walking, be largely cut off from current events, and where ignoring regulations over clothes and hair might get you screamed at.

And don’t even think about using your phone.

But for the young people who accept admission to the prestigious U.S. Coast Guard Academy, a desire to serve their country, get an education and sail the seas pushed them past any discomfort with the rules.

In interviews with Youth Journalism International, some of the “swabs” – the name for the incoming Academy students – talked about their motivation to join the Coast Guard.

“I found the Coast Guard Academy when I was a freshman in high school,” said Deery.

Mostly straight out of high school, Yokitis, Deery and other future cadets described a seven-week period called “swab summer,” where training is intense.

When the swabs are walking, Deery said, they must make precise 90-degree turns. Sitting down for meals, their feet must be positioned at 45-degree angles. They’re not allowed to look at their food, Deery said, keeping their eyes “on the boat” or straight ahead.

Food on utensils must be raised from the plate to mouth level and brought at a 90-degree angle to the mouth.

Swabs can’t use mobile phones, and any news or other connection with the outside world is strictly through letters from home or anything their superiors share with them.

The swabs interviewed recently on the Eagle, having completed those six initial weeks of training, were just a week away from the ceremony that would make them Fourth Class Cadets at the Academy in New London, Connecticut.

They spent that last week on the Eagle, the Coast Guard’s iconic tall ship. Earlier this month, it docked in Portland, Maine in celebration of Maine’s 200th anniversary as a state. After a couple days, they sailed the cutter to Connecticut.

Built in 1936, the Eagle is often dubbed “America’s Tall Ship.” A crew of Coast Guard cadets and swabs from the Academy sails the ship with its majestic 147.3-foot mast.

Under the setting sun, dozens of beautiful flags hung above Yokitis and other swabs from rigging stretching from the masts to either end of the ship. Many resemble the flags of other countries, but swab Grace Beardsley, 19, explained that they are all nautical signals. While the ship uses radio communication, the flags are used as well.

Beardsley, a Michigan native, said she “wanted to serve and also go to college,” explaining that her brother had also enlisted almost a decade ago.

Deery explained how their duties varied during their week on the Eagle.  Being ready and vigilant is the most important job, according to Deery.

“Our main purpose is to learn how to stand watch,” Deery said, adding that a watch shift lasts four hours.

Yokitis, a high school rower, committed to the Academy in her senior year.

“I like boats,” Yokitis said with a laugh. “I know it’s kind of cliche, but it’s a big reason why I joined the Coast Guard.”

The idea of “being pushed mentally and physically and growing as a person” was appealing, too, Yokitis said, as well as “serving my country.”

Attending the Academy also allowed Yokitis to receive a college education without accruing college debt and spending time learning material that wouldn’t be of use.

Swabs aren’t the only people on the ship. Older upperclassmen at the Coast Guard Academy help run swab summer and are more experienced in sailing the Eagle.

Others on the Eagle include those who enlisted without going through the Coast Guard Academy.

Alex Bagget, 21, joined the Coast Guard immediately out of high school, because, he said, in part because it stays busy helping people in trouble.

“The Coast Guard’s just active 24/7,” Baggett said. “I wanted to help make that difference in someone else’s life.”

Even younger, John Smolenski, 16 of New Jersey and John Jackson, a 17-year-old from Indiana, are high school students who are members of the United States Navy Sea Cadet Corps, an educational program for students from the ages of 10 to 18.

Being on the Eagle before beginning his senior year of high school back home in Indiana is an “outstanding opportunity,” said Jackson.

Deery said she once took a civilian tour of the ship. This time, she’s learning how to sail and climb the rigging.

“This is our final week of training,” she said, “I’m really excited to get out to the sea.”

Second Class Cadet Hannah Bliss of Florida, who has experience sailing the Eagle, enjoys being on the ship and has developed a love for the sea and its lore.

As a third-year student at the Academy, Bliss, 19, is one of those supervising the swabs on board.

Bliss said the long watches onboard the Eagle are beautiful.

“It’s just you and the stars, with the disc of the horizon around you.”

Sarah Gandluri is a Senior Reporter with Youth Journalism International.