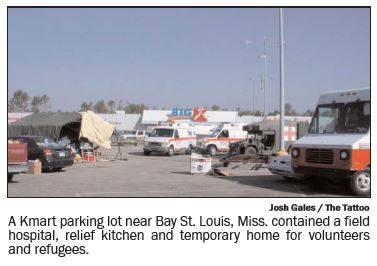 BAY ST. LOUIS, Mississippi, U.S.A. — It all started one afternoon in late August, just after Hurricane Katrina hit.
My mom was sitting in the recliner with her laptop, and I was waiting impatiently next to her while she talked to my dad. He was in Los Angeles, helping to coordinate tsunami relief for the agency he worked for.
My dad told my mom that he would be going to the Gulf Coast to do relief work. At the time, the only things that the agency had to work with were supplies meant for Indonesia. But as the week wore on, things started to come together. One man donated several industrial stoves. He didn’t have time to get the pots and pans, so he handed over his credit card, and told them to buy what they needed. 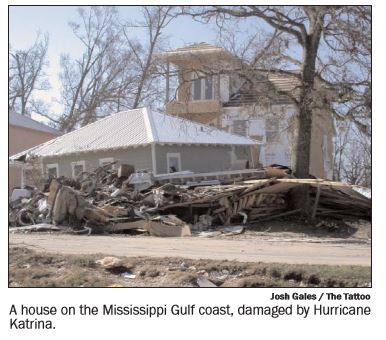 My dad helped put together drives for relief supplies and after that week, there were enough to fill up an entire semi.
My dad and I headed to meet the truck in Baton Rouge, La., where the goods had been hauled.
On the drive up from Florida, we didn’t know what to expect. We brought camping gear and our own food. We also brought about 40 gallons of water, just in case.
We drove in our minivan. The poor thing was never the same after the trip.
On the way there, I slept through the worst of the storm damage, and woke up near Baton Rouge. We were supposed to go to a church there where relief efforts were being coordinated.
Baton Rouge, which is north of New Orleans, didn’t receive much damage. The power was out for a couple of days there, and the occasional tree was down, but it was absolutely nothing compared to what I was about to see.
While we waited for the truck to arrive, we met with the pastor, and found out more about the situation. The further south you went, the worse the damage got.
When the truck arrived, the process of unloading it began. The church had a forklift, but the pallets had to be moved from the front of the truck to the back for unloading.
My job was easy, however. I took photographs for the relief agency to use later for things like acquiring grants. 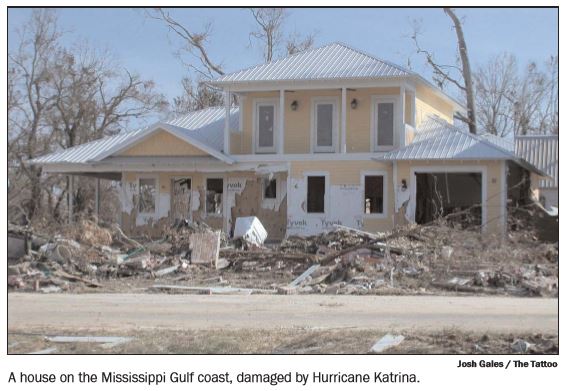 Once everything was unloaded, it had to be sorted. For the most part, the pallets were organized, so that wasn’t so bad.
Having everything sorted made it a lot easier to distribute, and distribute we did. The entire load was gone the same day.
With nothing else to do in Baton Rouge, we headed on to Mississippi. The closer we got, the more damage we saw. More trees were down, and billboards were history. There were abandoned cars on the side of the road.
As we neared our destination, there were no trees alive. Everything was brown.
The trees didn’t uproot like you would think. Instead, the trunks just snapped about 15 feet off the ground, no doubt where the water level reached during the storm surge. Every now and then, we saw a lawn chair or something maybe 15 or 20 feet off the ground, stuck in a tree — washed there by the waves.
The interstate had been cleared already, so we didn’t have any trouble getting to Bay St. Louis, Miss. I saw cars strewn about like toys. I even noticed a dump truck that had been tossed into a ditch, trees bending, trees broken, a thin layer of mud on the road, cars ruined by the water on the side of the road. I’ll always remember that moment.
We were dumbfounded by the sheer power of this storm.
Things didn’t get any better nearer the coast. The bridge across Bay St. Louis was completely washed out. Only the pilings stood, and not all of those were where they used to be.
Trees were stripped of all of their leaves. All that was left was the skeletons of the once majestic oaks. Next to one of the skeleton trees, there was an empty foundation. The entire house was swept several doors down. 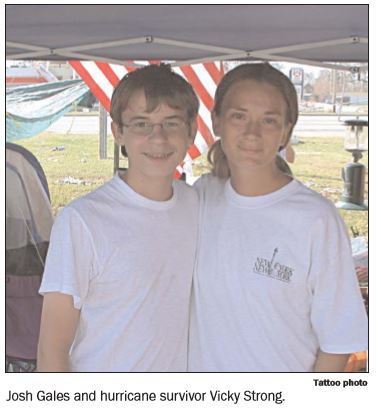 Over by the washed out bridge was the only place that you could get cell phone service. National Guard members, media and residents alike were out there on their cell phones.
I got used to stepping over the downed power lines that were all over the place. They were nothing to be worried about, though, because none of the power had been restored.
We stayed a few miles up the road in the parking lot of a Kmart. Although it was well away from the coast, the entire building had been covered by the storm surge.
Rescue crews pulled six dead bodies off its roof before we got there.
The parking lot was a hub of activity. A field hospital set up in the middle of it was treating a lot of patients. In one corner, a church had set up the “Waveland Café,” where they served meals and gave clothes to hurricane survivors and relief workers. We had plenty of food, but it was nice to get a cold drink and wash my hands there.
On the other corner of the parking lot, there was a makeshift helipad where the medical helicopters would land.
My dad and I slept in a tent in the opposite end of the parking lot from the store. We had a few neighbors.
One of them was Vicky Strong. Strong was a waitress with young children who lived a few blocks from the coast.
When Katrina bore down, she told us, her family evacuated to a house a few blocks further from the coast. They thought they were fine, because the house they evacuated to only got six inches of water in it during Hurricane Camille.
But Katrina flooded that same house with nine feet of water.
So Strong and her family “moved” into the parking lot. With things as they were, they had a nice place to stay, complete with a couch.
Her story made the news. Somebody saw it, and offered them a house in Alabama for a year. I have since been in contact with her family. She is doing well, and her kids are back in school.
Another neighbor we talked with didn’t evacuate at all.
He told his wife to climb upstairs while he went out to retrieve his boat. In the middle of the storm, he left his wife inside alone while he got the boat.
While he managed to reach the boat, he couldn’t control it. He was swept away from his house and into the woods. The boat struck a tree, where he was able to secure it.
He couldn’t get to the house, however. He watched as the water rose and rose. It covered the entire first story. Had the house been only one story, his wife would have died.
But she made it, and was living in the parking lot with him.
One family there had a dog living with them. Caesar was his name. He would just sit there and drool away the day.
But one morning, I noticed a big, black dog wandering around the other side of the road. Since Caesar was the only big, black dog I knew, I went to his owners’ tent.
It was early and they were still asleep. I rattled the tent. Nothing. I shook it a little harder. Someone stirred.
“Hello?” I said.
“Yeah,” said a voice from the tent.
“Do you have a big black dog?”
“Yeah, why?”
“I think I just saw him wandering around on the other side of the road.”
“Oh, thanks. I’ll be right there.”
I pointed to where I last saw him. Sure enough, it was Caesar. Pretty soon, he was back sitting in his spot, drooling just as much as ever.
During the day, we went out looking for churches that needed supplies.
One day, we drove to Biloxi, Miss., where the damage was very bad. All of the road signs had been either blown over or washed away, so it was very hard to find where we were going. We ended up using landmarks like a stoplight that was hanging a few feet off the road to find our turns.
The church there had been flooded with about nine feet of water, and had a coating of mud over everything that wasn’t nine feet in the air, so all of the activity was outside.
We gave them a couple of the industrial stoves to use, and picked up a few propane tanks to fill for them in Gulfport, Miss.
The National Guard was all over the place – just like the tree services.
My experience was completely opposite of what we all saw on the news from New Orleans. Everybody was grateful for the help. Nobody was complaining. Nobody was yelling at the police. Nobody was shooting at helicopters.
They were just people who lost everything and were starting their lives over. The people I met were hurricane survivors, not hurricane victims.

Josh Gales is a Reporter for Youth Journalism International.