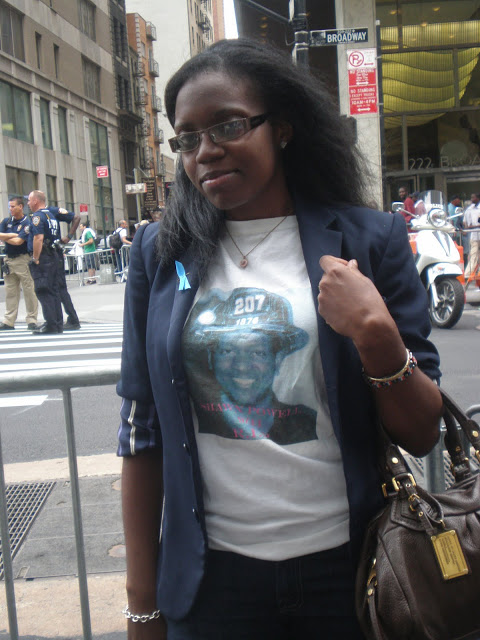 Janice Nickerson, whose cousin died in the terrorist attacks on 9/11, wears a shirt Sunday in New York that bears his photo. (Emma Bally/YJI)

NEW YORK, N.Y., U.S.A. – A sea of people flowed from block to block at the 9/11 Memorial site in Lower Manhattan on Sunday, all marking the 10th anniversary of the terrorist attacks.

Some stopped to take pictures and some proudly held up images of loved ones lost on Sept. 11, 2001. Some were natives of New York City, and some came from other countries.
A single tragedy brought all of these strangers together.

On a perfect day in early September 10 years ago, terrorists hijacked planes and crashed them into World Trade Centers One and Two, the Pentagon, and into an open field in Shanksville, Pennsylvania.
Almost 3,000 people died that day, and many more lost spouses, parents, siblings, or children.
“I was kinda confused at the time ’cause I was 11,” said Janice Nickerson, a retail worker in Brooklyn.
Nickerson was one of the many family members of victims of the 9/11 attacks. Her cousin died on that fateful day 10 years ago.

Jody Madell was teaching at the New York City Museum School on 9/11, close to the World Trade Center.
“We got the news of things happening little by little,” Madell said. “People were very confused. We didn’t let anyone leave the building.”
Parents came to pick up their kids, Madell said. One parent came in and just started crying and crying, she said.
Madell said that the kids didn’t get why everyone was crying.

Afterward, Madell was scared that students would start “hating Muslims no matter what.” 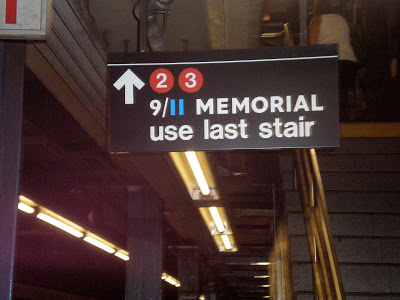 Before the 9/11 attacks, Madell taught a curriculum about the world’s different religions and beliefs.

“It was supposed to get students to appreciate the beauty of people with different beliefs,” she said. “I feel it is an important job as a teacher to get people to understand people who were different from them, I was afraid it [9/11] would interfere with that.”

Ten years after the attacks, a new building is under construction where the twin towers of the World Trade Center once stood. Along with it came a new spirit of hope and peace.

There were white ribbons tied to the fence at St. Paul’s Church, and singers could be heard singing “Amazing Grace” and “America the Beautiful.”

Despite the calm mood, shouts and chants could be heard from across the street. 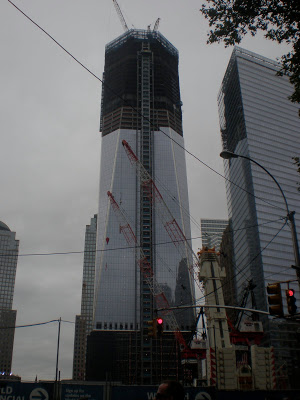 People who believed 9/11 was an inside job were positioned holding signs saying “Danger! USA Did 9/11.”

Las Vegas engineer David Hart was among the protesters. When asked why he thought the United States was responsible for 9/11, he answered simply, “Because I have a lot of questions that the government won’t answer.”
“My rights were destroyed when the towers came down,” Hart said. “The Patriot Act was written to protect us from terrorists, but it’s being used against us. I don’t trust my government. Actually, I don’t have a government. My government died a long time ago.”
In addition to the chants by intense protesters, persuasive voices hawking products also filled the streets.
Lined up across the blocks were young and old entrepreneurs, seizing the opportunity to sell flags, models of the buildings and water.
People also handed out pamphlets ranging from, ‘Christ and 9/11,’ to ‘Judaism and 9/11.’
Police officers were grouped together at every street. They declined to be interviewed, saying they were told not to offer an opinion.
Vinny Mastorpasqua, a retired fire fighter who lives in Staten Island, gave a heroic account of the day of the attacks.
“I was at home,” Mastorpasqua said. “After the second plane hit, I came to go to the site.”
He “dug through the rubble, searching for any sign of anyone,” Mastorpasqua said. He said the fire department had six moments of silence for the 10th anniversary.
Maurice Murdock, an advertiser who works in New York City, summed up the horrific day.
“There really aren’t any words to describe how shocking it was,” he said. “There still aren’t.”

Emma Bally is a Reporter for Youth Journalism International.