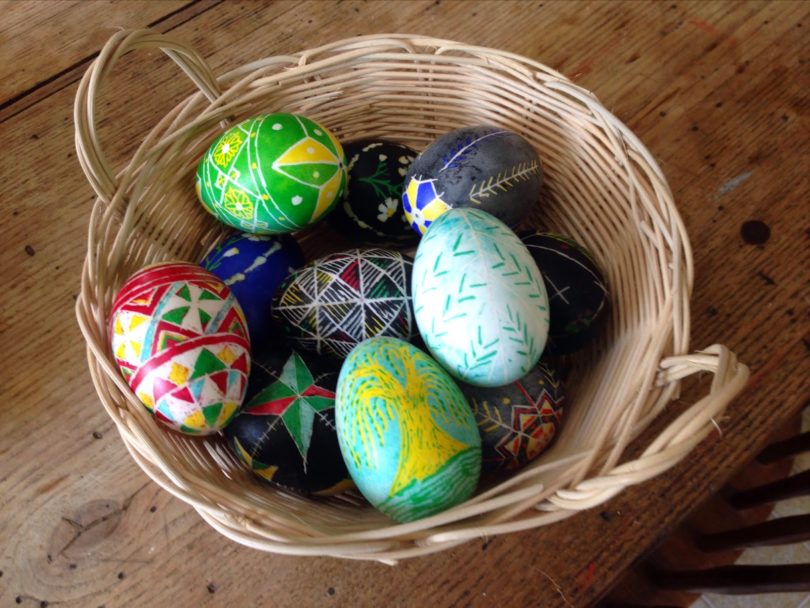 She learned how to do pysanka, or pysanky if there is more than one egg, from her mother, who immigrated to the United States from Ukraine many years ago.
She first took all her old candles and melted them in pot on the stove. Then she stuck a long sewing needle into an eraser on her pencil, dipped the needle into the melted wax and drew on the egg. This is a different way of doing pysanky, but it works. 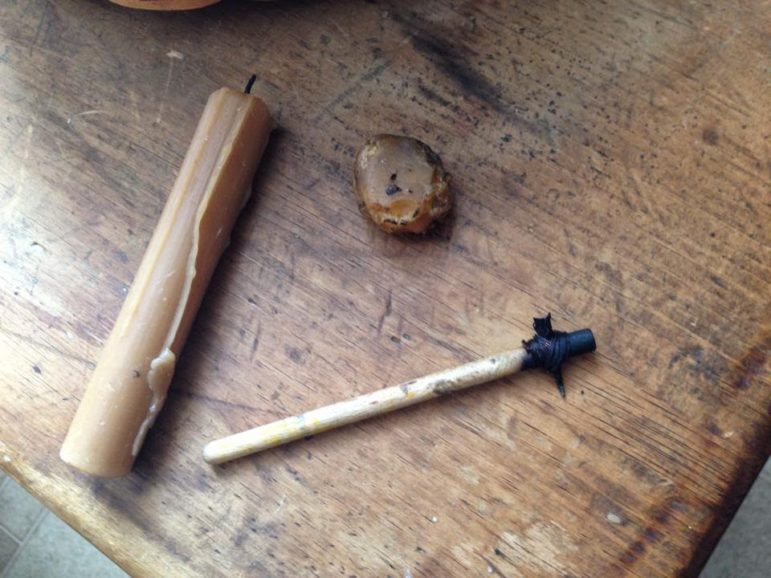 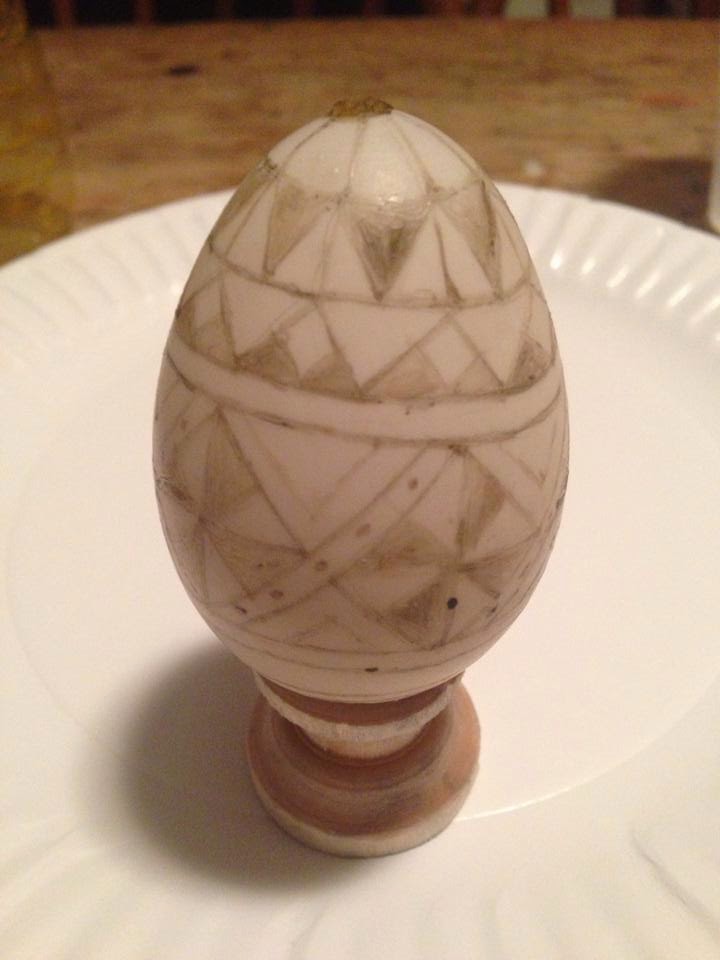 The ducks on my farm give two eggs a day, and I use those for coloring. Duck eggs take color better than chicken eggs. And duck eggs have very thick shells, making them easier to hollow out and more durable. I’ve dropped hollowed duck eggs onto the floor by accident and they didn’t break.
Instead of boiling the eggs before coloring, I hollow them out. Boiled eggs can last a few months, but eggs that are drained can last a lifetime. 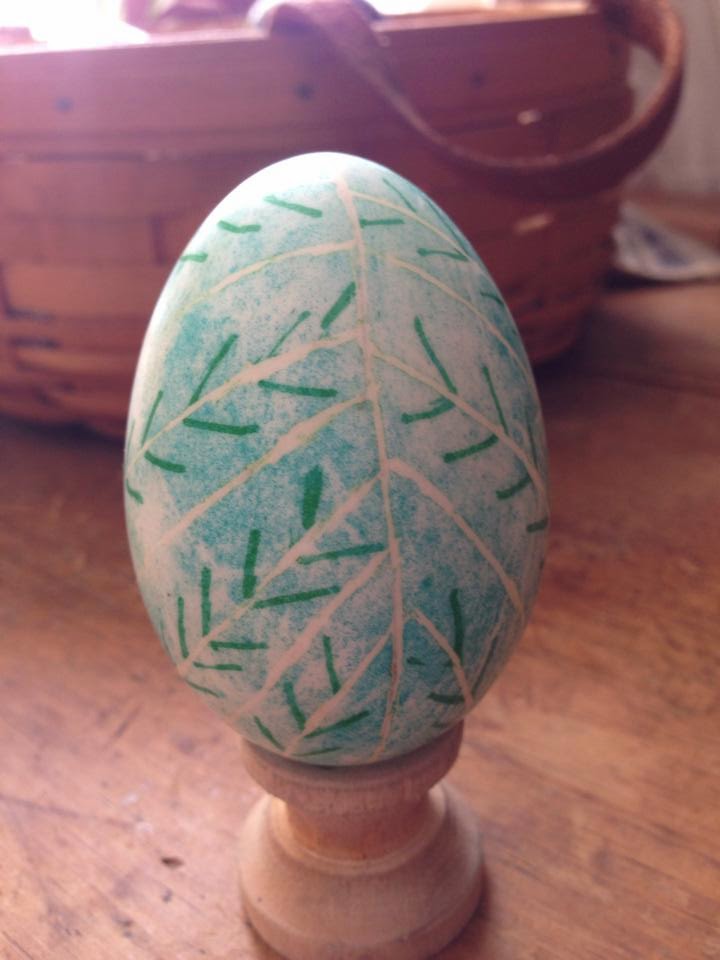 An old Ukrainian saying goes, “If you have been good since last Easter, your eggs will last 100 years.”
To drain an egg, I push a thumbtack into the top and bottom of the egg to make a small hole on each end. 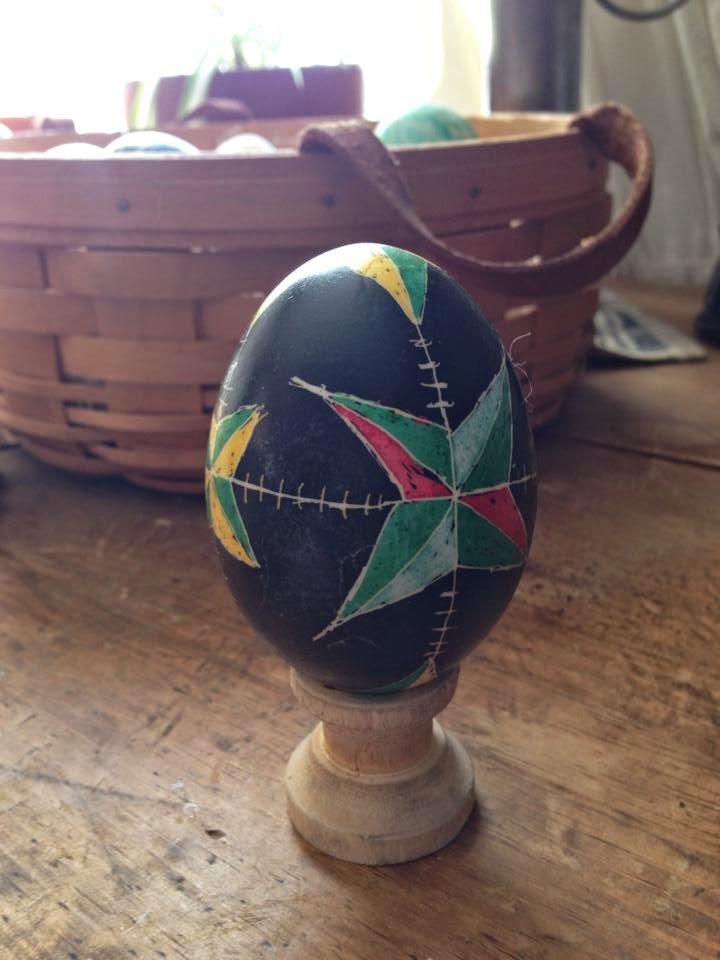 Then I blow into one of the holes until the contents come out the other end.
This can be especially difficult with a chicken egg because the shells are more likely to shatter.
After draining the eggs, I rinse them out and let them dry. Then I design them with wax. 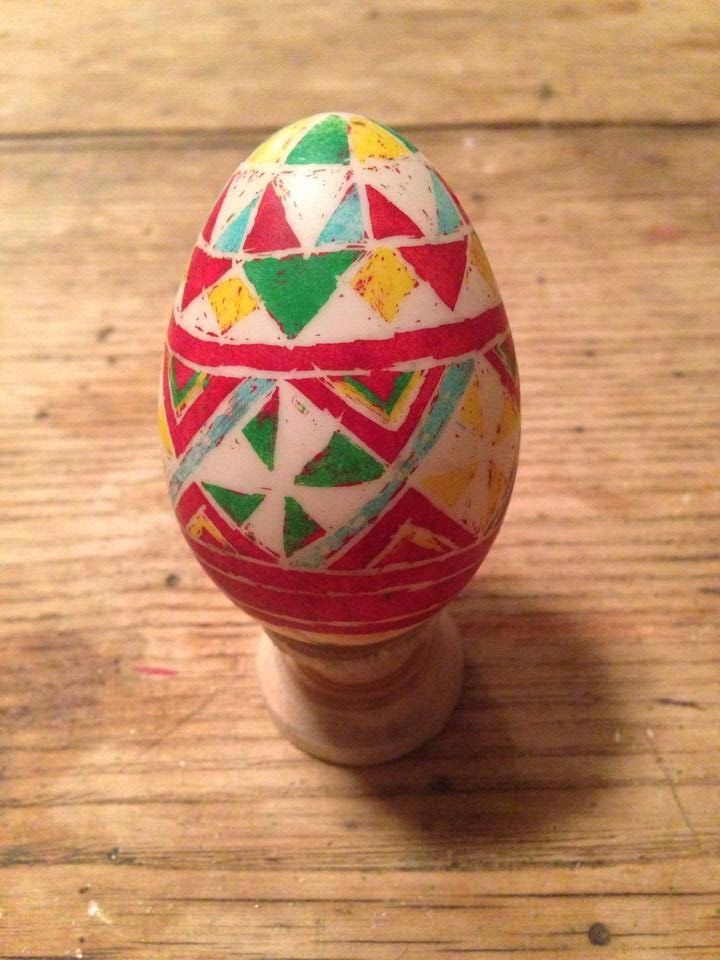 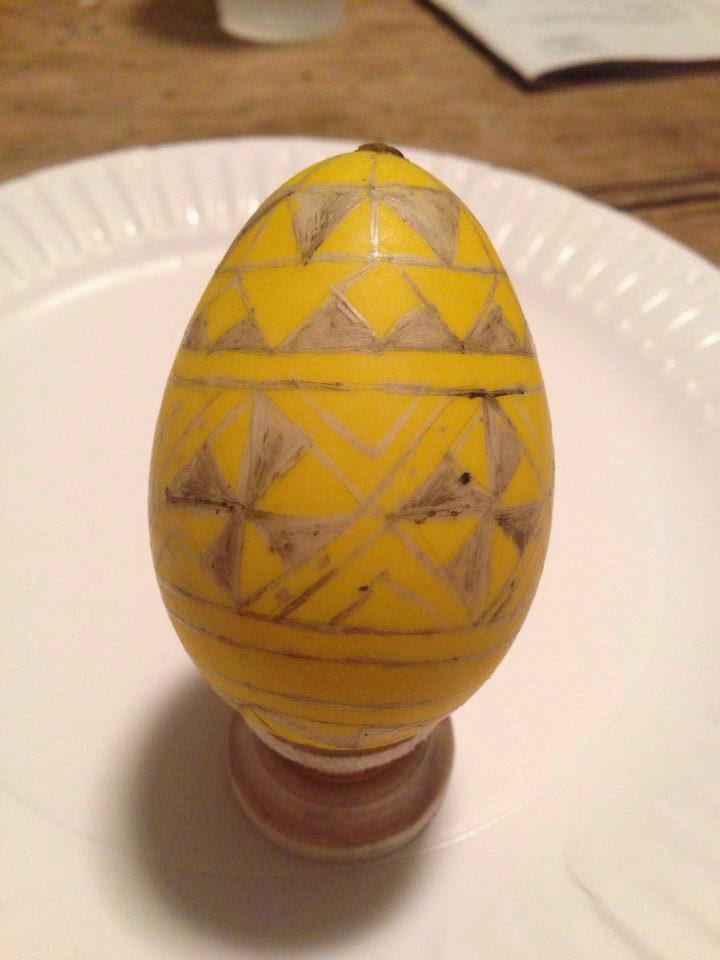 I use beeswax, which I find works best. I get mine straight from my beehive, but it is possible to purchase it.The egg is first dyed yellow, and after it dries, more wax is applied, including over the yellow color to keep it intact. Then the egg is dipped into a darker color. The process continues with darker and darker colors until the last color, black. 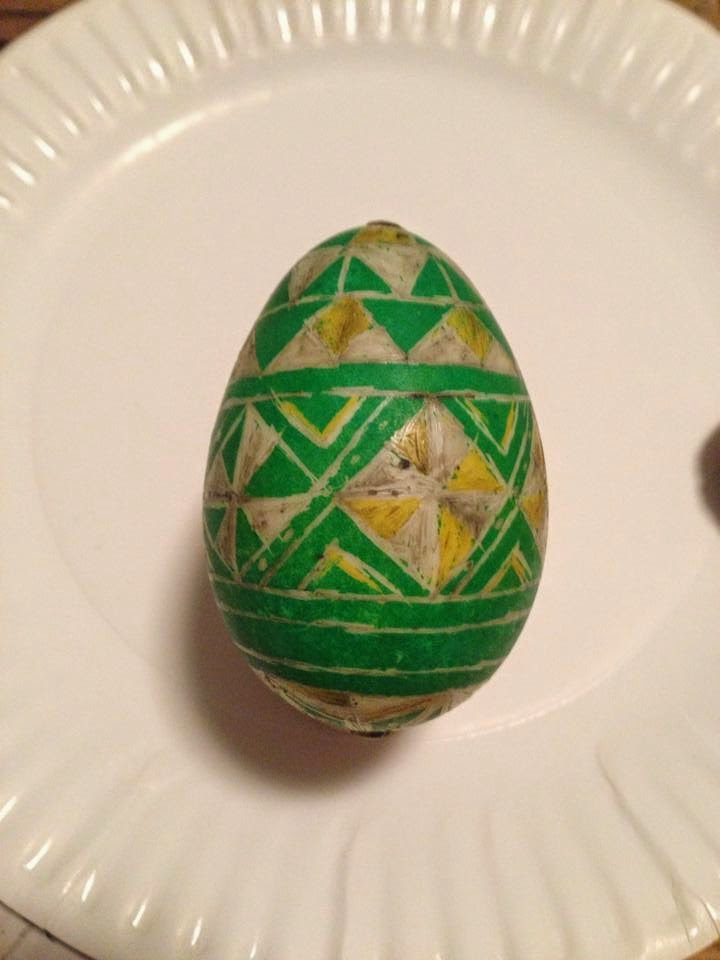 After the egg is dyed black, the egg is held close to the heat of a candle, and the wax stuck to the egg melts away, showing all of the colors underneath.
You can stop dying the egg at any color. I usually end at black, red, or green.
I use European egg dyes that I get from a seller in  Pennsylvania. They’re usually natural material and then you add vinegar and some water. 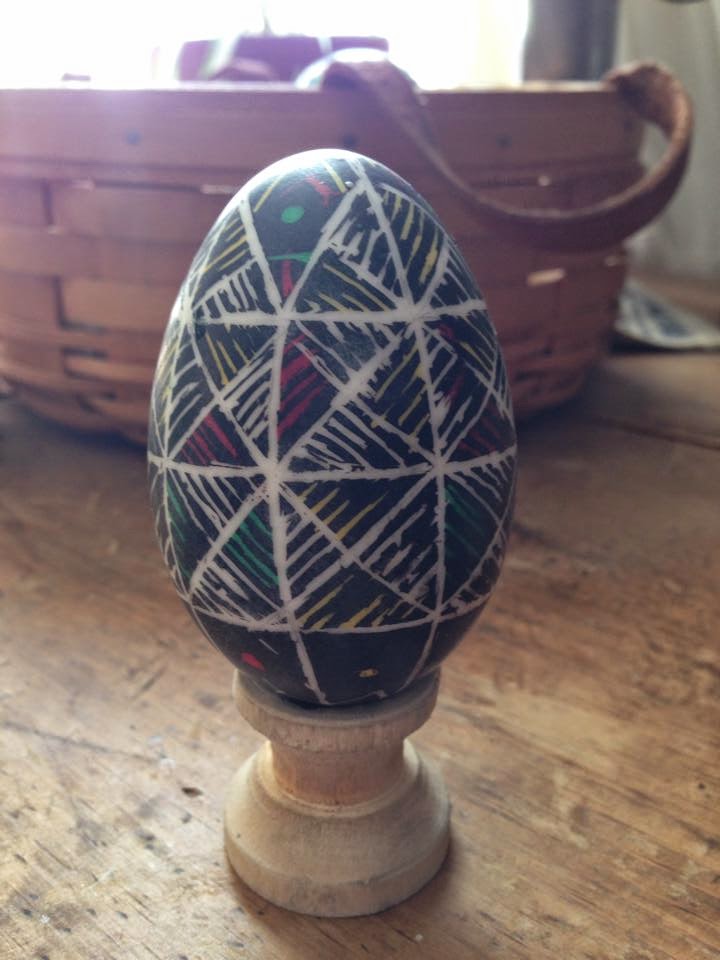 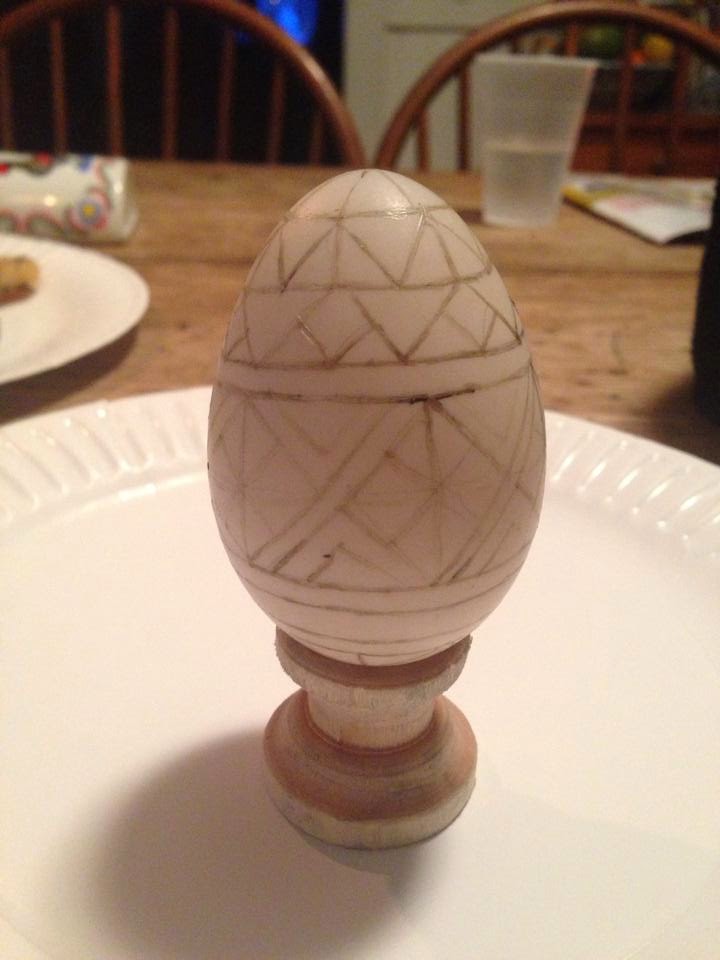 It also wasn’t okay to waste eggs, so they boiled them and ate all of them at Easter dinner.
Since they used just one color, the eggs were very simple, but I still learned her method.
My great-grandmother was also a great fan of traditional “Egg Tapping” or “Egg Fighting” games.
Later adopted by England, the game can be traced back to 14th century Croatia. In the game, two hard-boiled eggs are hit together.
The egg with the shattered shell loses, and the winner gets to eat the opponent’s egg.
All eggs pictured with this piece were dyed and photographed by reporter Tom Vaughn. Below, an assortment of duck eggs, some plain and some decorated in the Ukranian style.
Tom Vaughn is a Junior Reporter from Connecticut for Youth Journalism International. 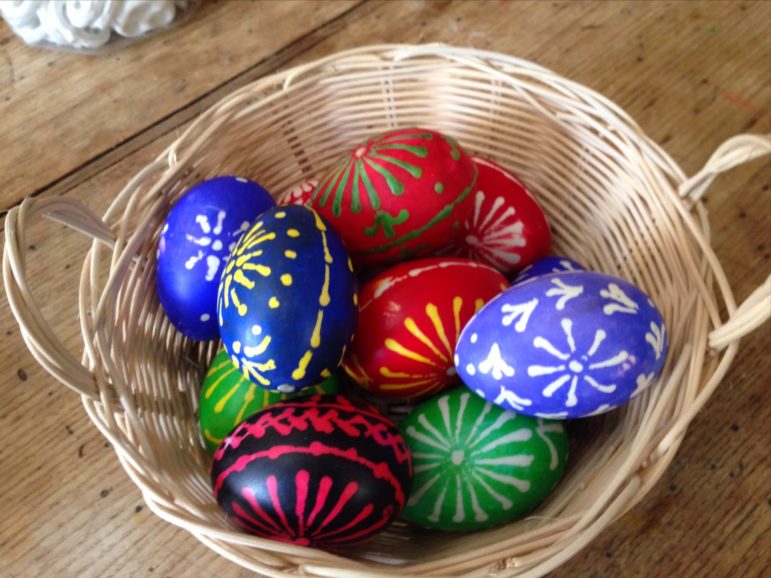