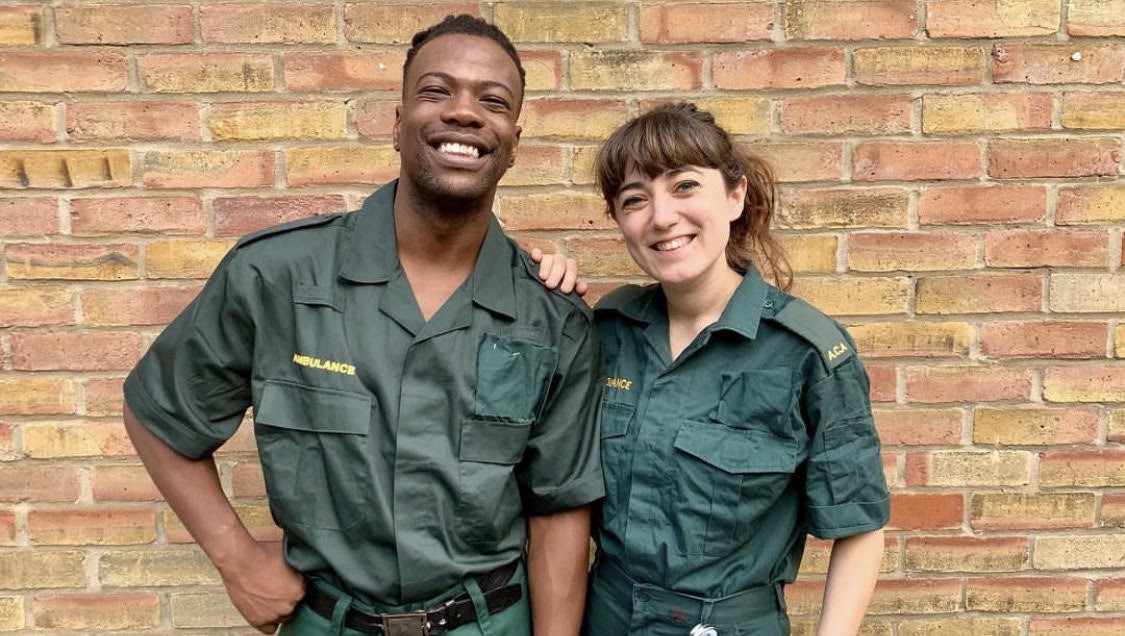 EDINBURGH – As a former ambulance worker, Marissa Landy wanted to raise awareness about the role of these healthcare professionals and advocate for increased wages – especially considering the low pay they received while transporting sick and vulnerable patients during the pandemic.

Landy did just that at the 2022 Edinburgh Festival Fringe with A Non-Emergency, a show she wrote, directed and produced the show for the Baloney Theatre Company. She also played herself as an ambulance care assistant in the production.

A Non-Emergency is “a real-life story focusing on two ambulance care assistants as they transport five different patients to and from the hospital,” said Landy.

Four of these patients are hilarious and bubbly, she said, with one very dark and raw story at the end.

Sound and lighting technician Danny Langdon said his understanding of the work of an ambulance care assistant was limited before working on A Non-Emergency.

“It really has opened my eyes. I now spot those ambulances everywhere I go!” said Langdon.  “A Non-Emergency’ really does shed the light and puts a light on these under-underappreciated, amazing workers and the work they continue to do.”

According to Landy, people she met on the job inspired the show.

“There wasn’t a very specific moment but there were certainly people, like our final character, that really made me think people have got to see this,” Landy said, to see what the workers were going through.

Interjecting humor and wit, the show weaves Landy’s stories of her time as an ambulance worker throughout the performance, making it some of the best writing at the Fringe this year.

Paulette Harris-German plays all five of the patients, which she admits are very different characters with different personalities.

Harris-German’s performance and her ease in capturing the audience shows her flexibility as an actress.

For Harris-German, the biggest challenge in this production was the last character.

“That’s quite a nuanced performance, I guess, and so we did a lot of work with intentions and so forth and really unpacked with this character,” said Harris-German.

Although Aadam’s bubbly and upbeat demeanor is an important aspect of his character, Madubeko said he didn’t want his portrayal to seem like a caricature of positivity.

“You want to remember that you are dealing with people who are going through things, and you also still have to be professional,” Madubeko said.

Shows at the Fringe are limited to 50 minutes, which challenged Landy, who said she would have liked to have spent more time exploring some of the characters, including Karen, an elderly woman with dementia.

Harris-German agreed. She said she would have liked to more deeply explore the patients and their lives.

Langdon wants the show to generate support for ambulance workers. He said there is a petition circulating on change.org advocating better wages and working conditions for ambulance care assistants.

“These are incredible people that do this every day on very little,” said Langdon.

Both Madubeko and Landy expanded on the importance of the relationships between the ambulance workers themselves and how they would like to explore Marissa and Aadam’s friendship in more detail.

“The strongest connection you’re going to have is with your partner,” said Madubeko. “They’re going to be a support system if you’re if you’re both dealing with things, usually separately – one will be driving and one will be in the back – then you have to go to that person for support afterwards.”

For Landy, it was important to have a diverse cast that reflected the population of South London, where the play is set.

“That is what the ambulance service is like,” she said. “It is cultures coming together discussing things that sometimes can be really uncomfortable and you don’t ever expect to hear them, but we can’t shy away from those things.”

A Non-Emergency ticked every box. The sound and lighting were both subtle and powerful, transforming a small space into a multitude of settings. The superb cast performed a hilarious, heartfelt – and often heart-breaking – ode to the National Health Service with great sensitivity and captured the attention of the audience completely.

A Non-Emergency is playing at the Wanstead Fringe Festival September 7-13.

EDINBURGH – In a dark theater space just off the Royal Mile in Edinburgh, 20-year-old Charlotte...