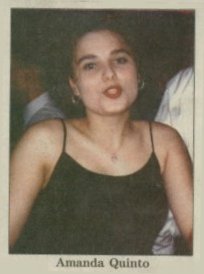 We cried and held one another, trying to understand why it was that we had lost one of our own, but the answer didn’t come. There were no answers. Mandi’s death — and the death of so many teenagers killed in such crashes — is senseless.

Police haven’t yet said whether alcohol was a factor, but we know that Mandi and the driver of the motorcycle had left a post-game drinking party moments before the crash.

Mandi was without the helmet that might have saved her.

Someone is killed in an alcohol-related accident every 30 seconds, according to statistics released by Students Against Drunk Driving.

Lighting our candles, several of us noticed a handful of teens arriving on motorcycles. Some were without helmets, others carried quart bottles of Budweiser.

We began to wonder if it was the will of an omnipotent being that we had lost Mandi or through the flawed logic of our own self-destructive game. We wondered what it was that blinded so many of us to the obvious solution to such tragedy.

Mandi would have graduated this year. She had her whole life ahead of her. She was getting out of Bristol. She was going places.

Mandi would have succeeded at anything she put her mind to, would have shot across the melting skyline of this life in the firecracker style that all of us will remember her for. Yet she has burned out, never to glow again.