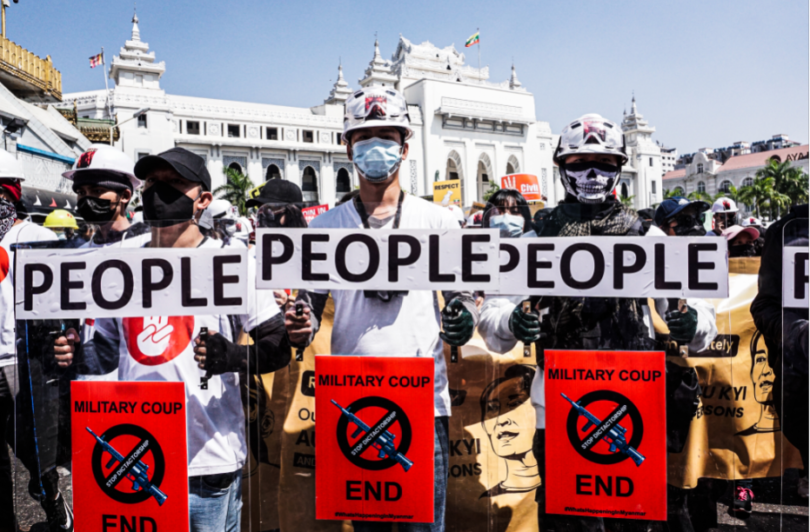 Yangon, MYANMAR – After a military coup, a brutal crackdown on citizens is underway in Myanmar. Thet, a new Youth Journalism International student in Yangon, describes what has happened since the February takeover.

The situation is changing fast, and Thet’s photographs documenting the pro-democracy, anti-coup demonstrations are primarily from the early days of the protests. To protect a vulnerable student in a situation that is dangerous for journalists, YJI is not using Thet’s full name.

March 11: I am trying not to be arrested

Me and my family are safe so far, but many students here are now detained by the military because of protesting out on the street.

I’m also going out to protest on some days and trying not to be arrested.

Now the internet is cut off every day from 1 a.m. to 9 a.m., so I will not be able to reach out to you during those times.

Most of the people in Myanmar use Facebook. It’s easy for the military regime to trace us in this situation. That’s why people are also using other means to communicate and talk about plans now.

March 20: They are now arresting journalists

Sorry that I cannot attend YJI Zoom meetings. I know I currently would not be able to concentrate on other issues when me and my country are facing these horrible military terrorists.

More than 200 people have died and the death toll is rising every single day.

Around 400 university students were detained since the 3rd of February.

The medics are also beaten for helping the patients. They are now arresting journalists and I have to hide or leave my camera at home whenever I go outside.

It’s like we have to be ready for our arrest. They could come to our houses and take our innocent family members at any time.

Some family members of people who belong to the National League of Democracy – not my own family members – were tortured and murdered and the dead bodies were returned to their families the next morning.

A boy who was just 19 years old was shot in his head just near my house last week. Many things are happening and get worse every day.

That is why some youths, including me, are finding strategies and preparing some weapons to defend ourselves and fight back. People are getting ready now.

It’s like we have no other choice. We have to win this for everyone’s future.

Our citizens in Myanmar voted for the National League of Democracy. It was my first vote and that’s why I couldn’t let the military misuse it.

One leader of the protest was taken and murdered by the military and his dead body was returned to the family this morning. I heard that there are the photos of the other protestors in his phone and the military will try finding all of them.

Those people who were killed were not from my own family, but I am deeply sad, as though they were.

Who knows? It can be me, my friends or my dad in the next days. We can’t tell.

I’m physically okay but the situation here is getting worse day by day.

Most of the photos were taken in Yangon when the situation was not that bad. Then, everyone was going out to peacefully protest, but now it’s totally different.

Not many people are going out anymore because the police and soldiers always crack down on the protests and terrorize the demonstrators and the neighborhood where the protest is held.

Many people have died. They are also targeting the journalists and anyone who has a camera. I have to leave my camera whenever I go outside.

They are stopping cars and checking on everyone in the cars at certain spots. So I just take the photos with my phone these days.

April 1: Soldiers and police are shooting random people on the street

Now it’s dangerous for us to go out like we did in the beginning of the coup. That’s because the soldiers and police are shooting not only protestors but also just random people on the street, depending on their anger and state of mind.

Since we are using wifi, the junta is going to shut down the broadband wifi too, starting tomorrow. Now our only access to the internet will be on the Fiber internet.

This means the majority of people in Myanmar will not be able to share or receive information as effectively as before.

I still can manage to contact you in any way I can, but just to let you know if you can’t reach out to us anymore.

Thet is a Junior Reporter with Youth Journalism International from Yangon, Myanmar.

Thet is a Reporter with Youth Journalism International from Yangon, Myanmar.