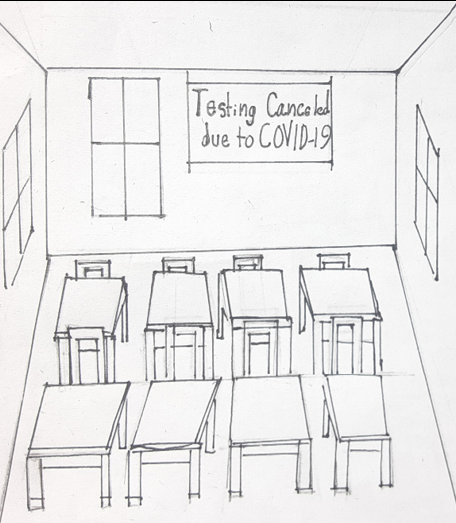 Ann Arbor, Michigan, U.S.A. – As the world struggles with the changes and stress of the COVID-19 pandemic, high school juniors and seniors are experiencing their own frustrations and uncertainty.

Standardized tests, such as the SAT and ACT that American juniors take, are canceled, and advanced placement (AP) exams are now at-home exams lasting 45 minutes, as opposed to tests at school lasting three hours.

Maneesha Mankad, a math teacher at Community High School in Ann Arbor, MI is happy with the College Board.

“I am so in awe of the amount of work they have done in order to adapt the test to the current situation,” Mankad said. “I am just so impressed at what a fabulous job they have done in not only rehauling the test, which a lot of people can do, but providing the resources that the kids would need to be successful. They have gone above and beyond my expectations.”

While it might have been easier for The College Board to simply cancel the exams for this year, they worked to ensure that every student was ready and able to take an exam at home. They are providing video lessons for students. Mankad is so impressed with these lessons that she has borrowed and learned from them for her own lessons.

Michigan Gov. Gretchen Whitmer announced the closure of schools in the state for the rest of the academic year on April 2. This means that the June 6 SAT exam originally planned will not happen. Instead, the state announced, students will take the exams this fall.

For many students, this will cause stress. Many students are distressed by the idea of studying throughout the summer for the SAT and wish that they could get the testing over with.

Mori Ono, a junior from Community High School, is frustrated with the changes.

“After June there is not an SAT day until all the way to August, at which point I’m already going to want to start writing college essays and actually start the college application process,” Ono said. “Having that setback is very annoying because in the beginning, I just definitely wanted to be done with testing by spring at the latest and while I might have more time to study and therefore I might have a chance of getting a higher score than I would have earlier, I also don’t know if that’ll actually be the case.”

“With a longer AP exam, even if you sort of mess up on another portion you can definitely still recover and get a very good score,” Ono said. “However, because it’s so short, you don’t really have a chance to do that. If something goes wrong, like you have a technical issue or something, then that’s really just not going to help you at all. For those reasons, it could work out, but also it could be very problematic as well.”

Like the shorter AP exams, more time before standardized tests can also be negative. Although more time before means more time to study – which can be a relief for a lot of students – the dragged out stress can be harmful.

“I would have to say that having school canceled gave me a lot more time to study for the exam, which is really nice,” Ono said. “But also, then the College Board introduced all these changes. So definitely my study plans sort of shifted quite a bit.”

Ono is grateful that he took the SAT before all of the cancelations, but was hoping to retake it to improve his score.

Often, the end of junior year is seen as a big achievement, a big academic hurdle overcome. Now, the stress and pressure that comes with standardized testing will continue for months more.

Further, juniors will be working on their college applications next year. Students will already be pressed for time and stressed by these applications. Taking a crucial test during all of this may affect scores and mental health.

Juniors will not have to pay to take the test at a later date, providing possible economic relief to some families. The fee to take the SAT out of school is $49.50 and the fee for the ACT is $52.00. This can be a big cost for many families, especially those who may be out of a job or facing medical bills due to COVID-19.

The College Board, which runs AP exams, has also promised refunds and no cancellation fees to students who choose not to take the at-home exams.

Seniors will graduate on track, which is a giant relief to many. But activities like prom and graduation ceremonies are canceled — a big disappointment for students who have worked for four years to graduate in front of their families.

The College Board asked for input from educators on students that need access to technology to ensure that every student has an equal chance.

Mankad does worry that participation will be lower this year, that students will not be as motivated to study for the exam, especially considering all of the extra stress that students are under.

She’s also concerned that students will lose confidence in their abilities if they cannot be as motivated to prepare well.

With all of these cancellations, the question is often raised whether colleges and universities should become test-optional. Over the past few years, many colleges moved to allowing students to opt out of sending standardized testing scores for admission.

Higher education institutions such as New York University, University of Chicago and Wake Forest University became test optional in past years in an effort to be more inclusive.

Some argue that standardized tests are an ineffective way of gauging a student. Many bright students may not be good test takers and often tests can be influenced by money, such as when affluent families hire private SAT tutors for their students.

The College Board announced that they are excited to go back to the longer tests and do not plan on keeping the 45-minute format in the future.

Mankad likes this longer test much more. It’s much better for students who did not take the class and are only taking the test, she said.

“They’ve already said that they want to go back to their usual test platform, which was many more questions and much more exhaustive addressing the content,” Mankad said. “Which I think is important, because if you’re saying you’re being excused from a course, because you took the AP exam and you scored a certain amount, then I think the better way to address the content and make sure that the students have learned everything is to have a proper exam that involves all parts of the content.”

Ono said everyone should still be fairly compensated and acknowledged for all of their hard work.

“I think people have worked hard for their AP scores and so I think even if the test is very different this year, I think that people still should be rewarded for the work they’ve done and the dedication they have put in,” Ono said.

No one knows what will happen next. High school students should keep in mind that there are many people working to ensure that everyone will have a fair shot and no one is disadvantaged by cancellations.

Mankad praised the work invested by teachers, school districts and The College Board to meet students’ needs at a difficult time.

“That brings a lot of hope and positivity in a time like this, where people get together, collaborate and bring out the best in themselves to help people in the community,” Mankad said.

Lucy Tobier is a Junior Reporter with Youth Journalism International.