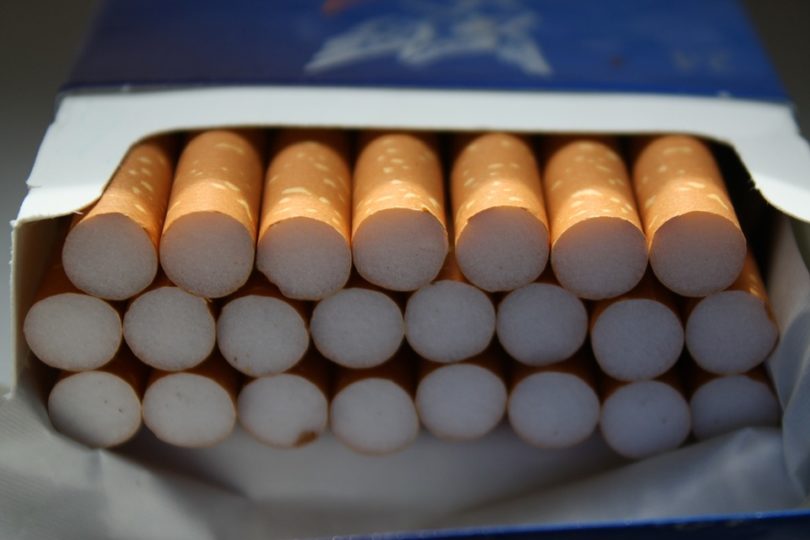 School administrators and the police are patrolling the southwestern corner of the parking lot to prevent student smokers from hanging out in a long-time safe haven.

But students are still finding ways to take their needed puffs anywhere they can.

Stairwells reek from cigarette smoke because so many students light up during class breaks, especially during lunch.

Another popular spot is the “pot rock” on the trail behind the school where students smoke — and maybe more — before school, between classes or after the final bell.

One smoker, freshman Heather St. Onge, said, “It shouldn’t be kept from being done because it is what happens and it’s perfectly legal.”

Michelle Collins, the school’s outreach worker, goes out there from time to time, Lyons said.

“It’s just a game of cat and mouse,” Lyons said.

But bathrooms don’t attract smokers because it’s too easy to get caught there.

“Smoking isn’t something that should be happening in school,” Lyons said.

Students who get caught smoking in the building will get slapped with three day suspensions, Lyons said.

Though administrators can’t be everywhere, he said, adults don’t have to be physically present to catch smokers. Video cameras have nabbed offenders in the past, Lyons said. He said they would occasionally set them up at random. “Sometimes we come up with some interesting footage that we share with moms and dads.”

The crackdown, part of a national effort to keep teens from smoking, is apparently spurred by the school’s hope to capture a blue ribbon award. Anti-smoking efforts will help.

Lyons said he will do his part to help with the anti-smoking campaign by having teachers and other adults “continue to educate students about the health hazards of using tobacco. … I think adults have to be role models.”

Early this school year, the number of teens gathering at the smokers’ corner had doubled from last year’s level, Lyons said.

Lyons said some of the kids who don’t smoke would join the large crowds gathered there to socialize with friends. Others who showed up didn’t even attend Eastern.

The large crowds bothered people who own houses on nearby Rich Lane, Lyons said. The corner also brought too many safety hazards, he said.

Among the problems may have been drug use.

“I’ve been told by some of the kids that there are other activities (at the corner) that we should be aware of,” Lyons said. But he said he hasn’t found any proof.

Collins said a teacher once this year reported smelling “something other than cigarettes” inside the school. Collins said she’s smelled illicit drugs just once in her four years at Eastern.

“In my opinion, they’re not doing it here,” she said.

Once Lyons, Collins and assistant principals Daniel Viens and Boyd Biondino started going to the corner in the morning, telling students to get to class so they wouldn’t be tardy, the numbers dwindled.

To lend a hand, a police car or two is often there, morning and night.

Now that the police are at the corner, students have been very cooperative, Lyons said. He said he has received compliments from parents.

Lyons said that eliminating the smokers’ corner “promotes a better atmosphere for the school.”

There have been “smoking cessation classes” administered at Eastern recently. But Liz Olejarz, a sophomore, said, “I’ve heard from people who are in it and it’s not working.”

Lyons said the students who continue to gather are “not a large group causing problems.” But, he said, “they’ll find a policeman there.”

There is still a large group gathered at the corner before and after school, however.

Regarding students smoking inside the building, Lyons said, administrators can’t be everywhere all the time.

Hila Yosafi is a Reporter from Connecticut for Youth Journalism International.