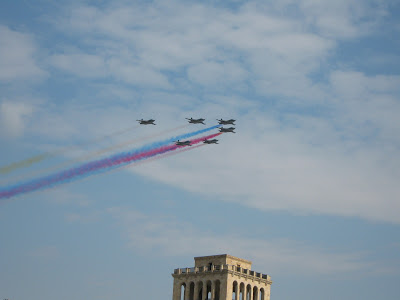 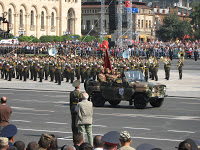 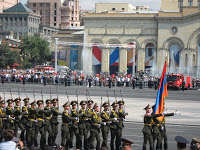 Reporter
Youth Journalism International
YEREVAN, Armenia – Though Armenia
is an ancient country with a history stretching back thousands of years, it
recently celebrated its 20th year of independence.

Armenia marked its Independence Day
on September 21, celebrating the restoration of its republic after 70 years of
occupation by the Soviet Union.

The festivities started
with a military parade in the Republic Square of Yerevan, the capital.

The biggest
display of the country’s military might in five years, the parade featured thousands
of troops as well as tanks, artillery systems, warplanes and other military
hardware.

Armenia’s
political leadership, ambassadors of different countries and thousands of
ordinary people watched the parade through the city’s main square.
There were also mass celebrations
all over the country.

The “Heroic Ballade” concert performance was the main event for the 20th
anniversary of independence. It presented the key episodes of Armenian history
accompanied by classical works of famous Armenian composers.
Using 3-D graphics, the show turned the buildings of the Republic Square into
screens displaying episodes of the history of the two decades of independence. Its
fountains, including new moveable ones, served as water screens.