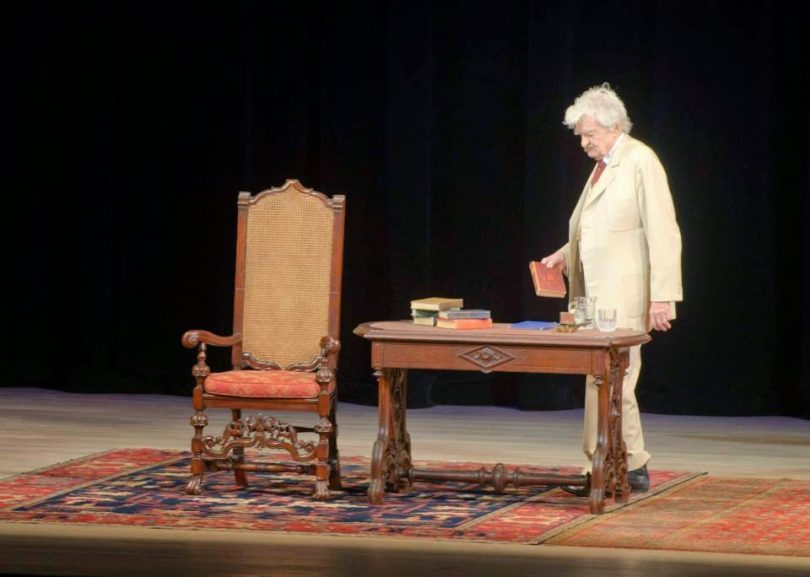 Used with permission from The Mark Twain House & Museum  John Groo, photographer Hal Holbrook during his Feb. 17 performance of Mark Twain Tonight! at The Bushnell Theater in Hartford.
HARTFORD, Connecticut, U.S.A. – For more than 60 years, Hal Holbrook has brought the magic of Mark Twain to life in his one-man productions portraying the author.
The famous actor celebrated his 90th birthday on stage last week, taking up the role once again at The Bushnell in Hartford.

The audience greeted Holbrook with applause and a standing ovation from the moment he stepped on stage, along with broken choruses of “Happy Birthday to You.”
Holbrook’s portrayal of Twain is unique. He’s thoroughly researched the author, so everything Holbrook says in the play was either spoken or written by Twain. Some quotes were recognizable, like, “It is curious that physical courage should be so common in the world, and moral courage so rare.” 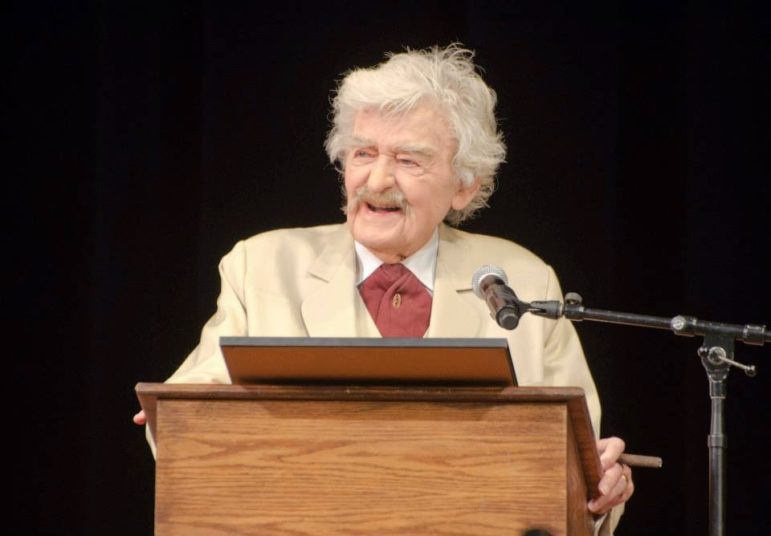 Used with permission from The Mark Twain House & Museum John Groo, photographer Hal Holbrook on stage at The Bushnell in Hartford.

Even at 90 years old, he delivered every single line perfectly.

The play included a lot of satire – religion and politics took the hardest hit. The audience thoroughly
enjoyed the show; Holbrook’s lines were punctuated with laughter from the crowd. Holbrook balanced the content nicely between humorous and serious, though. During some bits, you could hear a pin drop.

He captivated the entire crowd during his performance of a part of Adventures of Huckleberry Finn, one of Twain’s most famous novels. Holbrook walked over to a table full of books in the middle of the stage, as if he was going to pick up Huck Finn and start reading from it, but instead went into an incredible, dramatic performance of a lengthy except from the book.
The audience hung on to his every word as he told the story, word for word, from memory.
At the end of the show, Holbrook, still portraying Twain, thanked the audience and the people who helped host the show for all the compassion he’d received, saying that while compliments and praise are nice, he considered the affection the best reward,
and he was very grateful to receive that reward.
I found it amazing to see Holbrook perform in the role of such a legendary literary figure. While Mark Twain is a common name, especially in high school English classes, we usually don’t learn about the man himself.
Watching him recite a chapter of Huck Finn gave me a chance to see his work afresh, with a new appreciation for the man behind the classics.
Mugdha Gurram is a Reporter for Youth Journalism International. Yelena Samofalova, a Senior Reporter with YJI, contributed to this story.