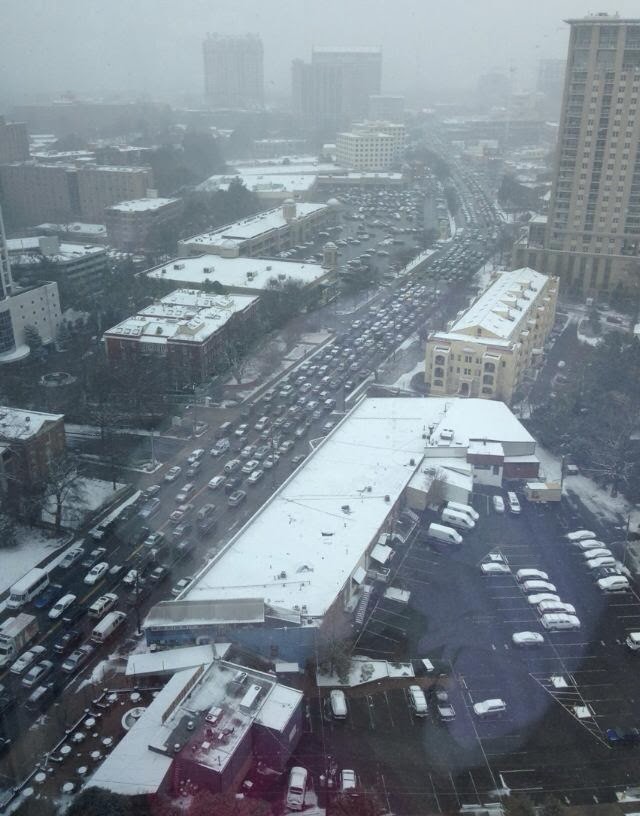 By
Johanna Boedenauer
Junior
Reporter
Youth Journalism International
NORCROSS,
Georgia, U.S.A. – As I tread through my neighborhood and observe children
scrape together snow, in an effort to create a perhaps doll-sized snowman, I
can’t help but shake my head at what people are calling Atlanta’s
“Snowpocalypse.”
Two
inches of snow was all it took to create statewide turmoil.

On
Thursday morning, Georgians were still waiting to get home. Drivers are just beginning
to retrieve abandoned vehicles, as the ice gradually melts under the southern
sun.
A
now rather shamed Mayor Kasim Reed tweeted early Tuesday morning, “Atlanta, we are ready
for the snow,” a statement which turned out to be far from the truth.

According
to the Associated Press, more than a dozen people died and more than 175 more
were injured in the more than 1,460 crashes that state police responded to
during the storm.
In
a “Newsy” broadcast on The Weather Channel’s website, the mayor and Gov.  Nathan Deal got blamed for poor planning, and
a less than adequate response. Reed and Deal are accountable for “turning Metro
Atlanta into a parking lot, and schools into hotels.”
The
reason for such a terrible delay? Schools and businesses, which usually always
remain closed at the first warning of snow, stayed open until about noon.
At
that point, the storm was already underway and everyone was let out at the same
time Wednesday afternoon, causing one of the worst traffic jams in American
history. This prevented snowplows and salt trucks from getting to the roads,
making travel throughout the city virtually impossible.
As
the snow turned to ice, cars were unable to maneuver through certain areas,
which caused hundreds of accidents, blocking off more roads.
Eventually,
cars ran out of gas and conditions worsened. Hundreds of people were forced to
spend all night camping inside their vehicles in temperatures below freezing.
Many
children remained in school for the night, while some were stranded on the
interstate in buses. Stories of six to 14-hour commutes home were not at all
uncommon on Wednesday.
Just
three years ago, Atlanta suffered a similar snowstorm that incapacitated the
city for days.
Deal
mentioned during a news conference Wednesday that they were prepared with much
more equipment than in the previous storm, but couldn’t implement it due to
blocked roads.
The
upside to all of this is that the disaster managed to unite people, young and
old.
Throughout
the night, southern hospitality shone like never before. Strangers helped
strangers push cars and buses, people handed out water and free hot chocolate,
and some kind families even opened their homes, giving stranded people a warm place
to stay for the night.

What’s
more, more than 46,000 people joined SnowedOutAtlanta, a Facebook group used to
provide information on the storm and even connect with affected motorists, to
give them resources or a place to stay.

Officials
admitted to mistakes and apologized for any inconveniences their actions
caused. Reed said they should have staggered when people went home, first releasing schools, then businesses and finally government workers.
It
seems that with each storm that hits the south, we learn a little bit more.
Hopefully, by the next one, we’ll get it right.