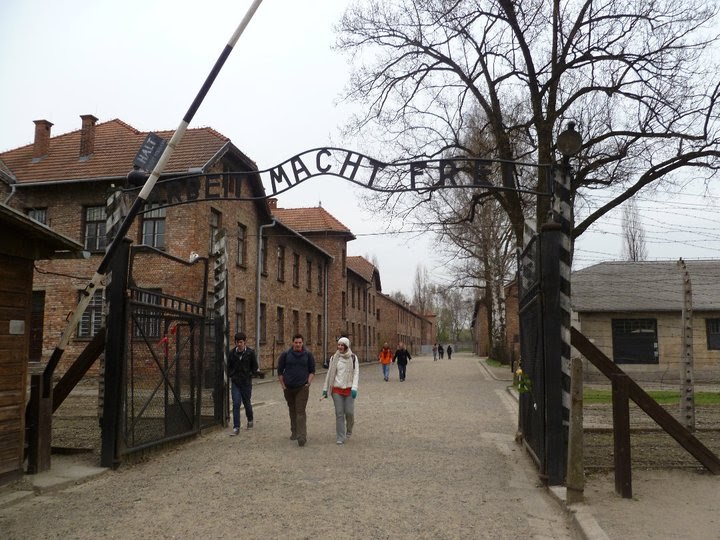 The entrance gate to the main Auschwitz camp and its infamous sign. (Nicole Hendry/YJI)

Oswiecim, POLAND — Walking through the gates of the former Auschwitz concentration camp, it was really quite hard to comprehend the true extent of the terror suffered by well over a million who trod the same ground.

The message that looms over the gates reads Arbeit Macht Frei (Freedom Through Work). In the eerie stillness of the camp, the sign remains as a bleak reminder of the Nazi regime, one of the world’s most brutal dictatorships.
It is impossible not to feel moved by this place, which is bursting with stories, with the lives and deaths that played out within its walls.
Following a guide, we walked through living quarters, beside the death wall and, possibly most terrible of all, down into the gas chamber where so many perished. 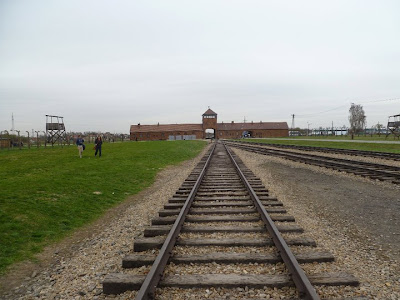 How anyone could inflict such horror on others is something I will never understand, yet throughout it all, I was struck with the sense that there is a need to do something more.
So many died there.Nothing can be done to change that. They are gone. Their suffering is over.
But simply acknowledging their experience is not enough. The tears we all shed there now do not do their lives and their bravery justice.
In the camp during World War II, the Nazis killed more than 1 million people, most of them Jews but also members of the Polish resistance, Gypsies and political foes of the regime.
The extent of this crime is unfathomable.So many lives were cut short and families torn apart.
Auschwitz isn’t just a cemetery for those who died, but for future generations who never got the chance to live at all.
Consider the Polish city of Krakow, where some 60,000 Jews lived before the Nazi invasion in 1939. Today, there are only about 100 left.
And Auschwitz is not alone in its terror. There were other camps, other killing fields, all with their own terrible stories.
This was a widespread extermination program.
Simply being made aware of what happened is not enough, not nearly enough.
To ensure the deaths there were not entirely in vain, we need to carry the message forward: never again.
The phrase ‘never again’ is thrown around all too easily.
We haven’t actually learned, have we? Just look at the racial hate crimes on the streets, the hostility towards people because of their religion or their personal views or their heritage.
To be horrified by the Holocaust is to accept that all forms of racism are wrong.
When we say never again, we need to mean it.
To be different is a beautiful thing. It is what makes the world such a colorful, vibrant place.
The alternative is Auschwitz.

Nicole Hendry is a Junior Reporter for Youth Journalism International.