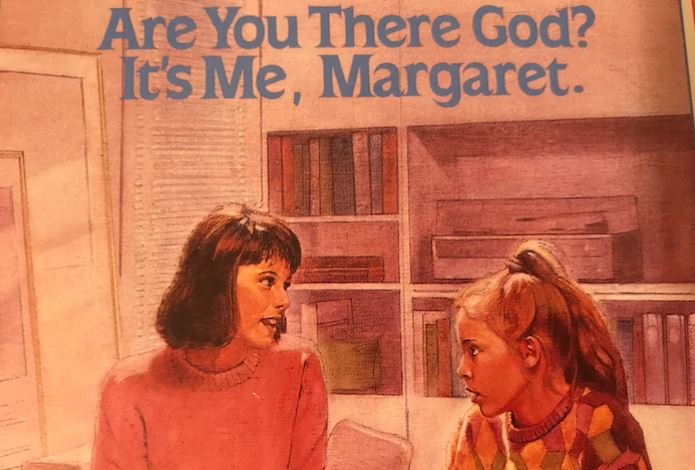 Are You There God? It's Me, Margaret cover
HARTFORD, Connecticut, U.S.A. – Author Judy Blume said she felt “very excited” when she finished writing Are You There God? It’s Me, Margaret back in 1970.
She said she wanted to give a few copies to the library at the school her children attended.
But the principal said no.
In the book, the main character, Margaret, gets her period, and the principal thought menstruation was an inappropriate topic for his primary school’s library.
“It never occurred to me that that could happen,” Blume said Thursday during this year’s Clemens Lecture for the Mark Twain House & Museum.
In the years that followed, many school and classroom libraries removed or chose not to get a number of her books.
According to the American Library Association, four of Blume’s books – Forever, Blubber, Are You There, God? It’s Me, Margaret. and Tiger Eyes
– were on a list of the 100 most frequently challenged books between 1990 and 1999 and from 2000 to 2009.
That some of her books have been banned is not a deterrent for her, but rather a source of pride because so many great authors have had their books banned, including Mark Twain, the pen name for writer Samuel Clemens.
“It was a real thrill to be banned on the same list as Mr. Clemens,” Blume said.
Twain’s classic, “Adventures of Huckleberry Finn,” is frequently under fire, and appeared on the same censored lists as Blume’s books.
“He questions authority,” Blume said about Twain’s character, Huckleberry Finn. “This will get any book banned.”
Tracey Sondik of Bolton, Connecticut, is a longtime fan of Blume and her work. One of the things she admires about Blume, Sondik said, is her stance against censorship.
“Judy Blume’s work really parallels Mark Twain’s work,” said Jeffrey Nichols, executive director of the Mark Twain House. “There’s a kinship between the two.”
Blume said she’s today seeing a return of the openness of 1970s culture.
“People are less afraid,” she said. “Less afraid is good.”
Most of the time, said Blume, it wasn’t a public library, but a school or classroom library that kept her work out.
Blume said that “out of fear, the books were removed, often.”
Censored books are often popular ones, said Blume.
“If you look at the books that are banned, they’re the books that kids like,” said Blume, “and if kids like it, it must be dangerous.”
Mary Majerus-Collins is a Senior Reporter for Youth Journalism International.. Youth Journalism International Junior Reporter Avery St. Germain contributed to this story.