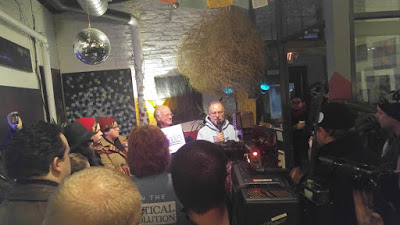 Jerry Greenfield, holding the microphone, and Ben Cohen to his right, bring their signature ice cream flavors to towns across Iowa in advance of the Iowa Caucuses. Co-founders of Vermont-based Ben & Jerry's ice cream company, the pair support U.S. Sen. Bernie Sanders of Vermont, in the Democratic primary. (Garret Reich/YJI)

COUNCIL BLUFFS, Iowa, U.S.A. – What is the ice cream flavor of the United States?  A chocolate infused democracy or a  rainbow sherbet for the states?  If the United States was voting for a
taste that would characterize laws and political campaigns, what would it be?

Vermont ice cream makers Ben Cohen and Jerry Greenfield – the founders of Ben & Jerry’s – are traveling across the frozen plains of Iowa with their iconic cold treats.

On Monday, Feb. 1, Iowans attending their local caucuses will be the first Americans to make known their preferences in the primary races for U.S. president.

Cohen and Greenfield are sharing their signature sweets in hopes of influencing the presidential race. The partners are supporting their longtime friend Bernie Sanders, a U.S. senator from Vermont who is running for the Democratic nomination. 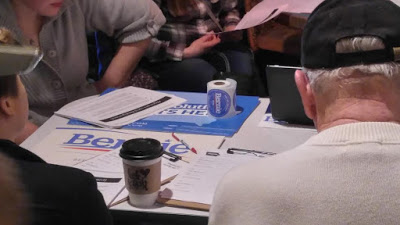 People gather around a table with caucus information and supplies. (Garret Reich/YJI) 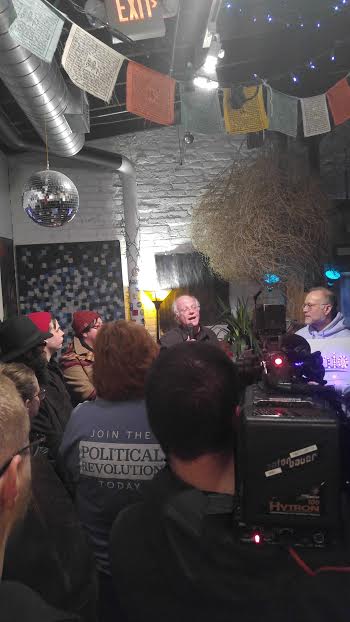 More than 80 people crowded into a small, one-man coffee shop called (drips) on Tuesday night, joining Cohen and Greenfield to caucus for ice cream. Staying true to a general Democratic caucus, the groups split up into four groups depending on their favorite flavor of ice cream: vanilla, chocolate, Peanut Buttah and Americone Dream – a vanilla ice cream with fudge-covered waffle cone pieces and a caramel swirl.

For any group to be viable, the flavor had to have a minimum of eight people supporting it.
While people practiced for caucus night by pledging allegiance to their chosen flavor, each supporter got rewarded with samples of the ice creams and the opportunity to meet the Vermont ice cream makers.
“We are here because we have been constituents of Bernie for the last 30 years,” said Cohen.
“Anytime the campaign wants anything from us, our answer is yes,” Greenfield said.

Cohen announced last week that he had developed “Bernie’s Yearning,” a new ice cream flavor based on Sanders. 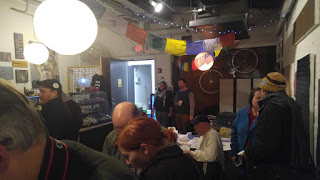 Before the Ben & Jerry’s founders arrived, people talked about the caucuses. (Garret Reich/YJI)

“Bernie’s Yearning” is what Cohen calls a “participatory flavor.”  When opening up a container of the new flavor, you’ll find a huge disk of chocolate that Cohen said represents the “majority of the wealth that was generated since the end of the Recession.”
You have to chip away at the disk of chocolate on top to get to the mint ice cream underneath. But when mixed all together, the container of ice cream represents what Cohen believes to be Sanders’ ideal for the country – a more equal distribution of the chocolate, or wealth.
In Council Bluffs, vanilla, the perennial favorite, did not attract enough supporters to be viable. So just like in a political caucus, supporters of other flavors got the opportunity to rally up the vanillas and try to get them to join a different group.
After re-assembling, organizers tallied the number of people in each group to determine the winning flavor.
Americone Dream, of course, won.
Garret Reich is a Reporter for Youth Journalism International. 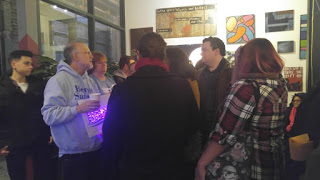 Jerry Greenfield, on the left holding a coffee cup and a lighted “Bernie” sign, caucuses with supporters of Americone Dream, one of his favorite flavors. (Garret Reich/YJI)