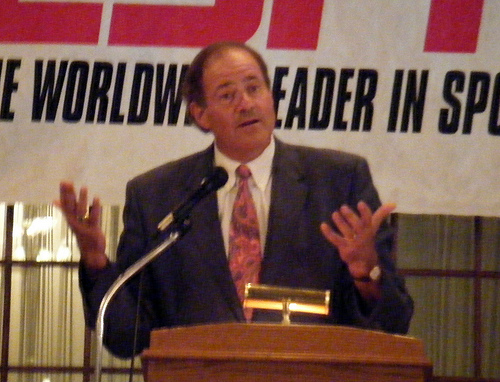 SOUTHINGTON, Conn., U.S.A. – Famed sportscaster Chris Berman said ESPN has changed a lot since he came to work there in 1979.
“Dishes? We had one that went up, one that went down, and four we ate off,” Berman joked in a speech to local business leaders that honored ESPN’s 30th anniversary.
Today, ESPN has an entire plot of land dedicated to satellite dishes, known as a “dish farm.”
Berman said the idea for ESPN began as a way for Connecticut viewers to see the Connecticut Huskies football and basketball teams on television. When told that a satellite broadcast would cost $35,000 a month, founder Bill Rasmussen almost turned away, according to Berman.
But when told that for the same price, the broadcast could be carried to all 50 states, Berman said, it was like striking oil in the backyard.
“It was the Beverly Hillbillies,” he said.
Plans for the new broadcast facility were already in motion, according to Berman, “so here we are in Bristol Connecticut, by an accident.”
Today, ESPN is an international media company with television and radio outlets, websites and more.
“I can’t really believe we do any of this stuff,” Berman said. “It’s pretty cool.”
But times were tough back in 1979.
“The first few weeks we didn’t really have running water,” Berman said.
They got by, though.
“We turned the corner for good in 1987,” he said, when ESPN broadcast the National Football League for the first time.
Berman said ESPN led the charge for a new generation of TV networks. “We rode cable’s coattails, and cable rode our coattails,” Berman said. “It’s all been amazing.”
Berman said that one thing he’s learned by working at ESPN is that despite having nothing else in common, any two people can talk about sports.
“I’ve seen how sports can transcend everything,” Berman said. “Sports is a melting pot.”
Berman said that one thing that made ESPN so successful is that the anchors talk “with,” and not “at,” viewers.
Another reason, he said, is Bristol.
“ESPN would not have had success if we weren’t right here,” Berman said.
The biggest event he’s covered, Berman said, was a Baltimore Orioles game when Cal Ripken Jr. broke the record for the most consecutive baseball games played.
In the third inning, Berman recalled, he turned around to get something and found himself face to face with U.S. President Bill Clinton.
Unsure of what to say, Berman said he simply asked, “Hi Mr. President, how’s it going?”