BRISTOL, Connecticut, U.S.A. — Taboo is a fast-paced game and requires a way with words.
In order to play, at least four players must be present. All of the players split into two teams and then take turns giving clues to teammates who have to guess the word on the card.
There are two sides to a card, one purple and one green, and at the top of the card is the word that the teammate of the clue-giver must guess.
It’s not as easy as it sounds because the clue-giver has a list of words on the card that they can’t say. Those are taboo. 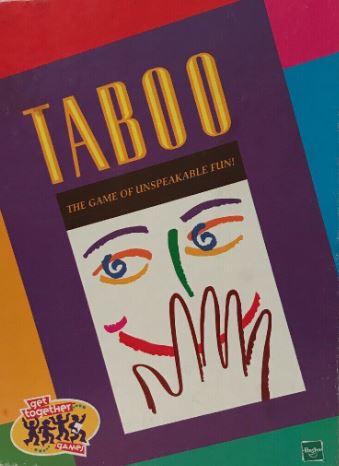 Set up takes about a minute, and it’s an easy game to catch onto fast. There’s a buzzer provided that the opposing team can sound if the clue-giver utters a taboo word while trying to get the rest of the team to guess the word.
Despite what the instructions say, the buzzer is not necessary, partly because the back of it requires a screwdriver and a player from the other team can just speak up if the clue-giver says anything taboo.
During play, teams try to win points on every round. Points are given to the guessing team only if they correctly identify the word. If the clue-giver says one of the taboo words on the card, or even part of a word on the card, the point goes to the opposing team.
The words, along with the timer, put a large amount of stress on the clue-giver. It’s also usually hilarious watching the clue-giver’s face as they struggle to come up with synonyms to already unique words, such as “Martha Stewart.”
The order of clue-givers and moving seats around can get aggravating.
The way the game is played, clue-givers need to be opposite their teammates, and the opposing team needs to be looking at the card over the clue-giver’s shoulder. This can become tedious.
It can also be a bit nerve-wracking because the clue-giver is constantly trying to pick the word that will make it easiest for their team to guess correctly.
Although the clue-giver can say just about whatever they want, they only have a short amount of time to explain or describe as many words as they can for their guessing teammates.
These minor problems don’t stop the game from being a lot of fun. Taboo is great for most ages, and can be played for any length of time.
The more players, the better. With a lot of players on each team, there’s a greater chance of a) getting the word faster, and b) getting bizarre answers.
Taboo is an entertaining and exciting way to expand your vocabulary while getting to know people in a group setting.
This game should not be part of your social taboo list.