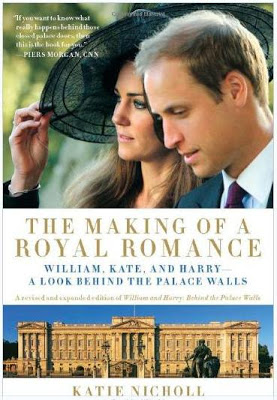 MESCHEDE, Calle, Germany – If you fervently watched the Royal Wedding last April, find yourself checking out Kate Middleton’s (a.k.a. the Duchess of Cambridge’s) clothes, are hoping that at least Harry might still be available and are excited about 2012 being the year of the Queen’s Diamond Jubilee – then I’ve got the book for you.

But even if you aren’t obsessed with the Royal Family and only have a healthy interest, the 2011 book, “The Making of a Royal Romance: William, Kate, and Harry – A Look Behind the Palace Walls,” by Katie Nicholl is worth reading.
Nicholl, who is the Royal Correspondent for the Mail on Sunday and has written about the Royal Family for magazines such as Vanity Fair, starts her book by going back in time to the births of the heir and the spare, William and Harry.
She paints an honest picture not only of the boys’ childhood but also of Prince Charles and Princess Diana’s marriage and eventual divorce.
You might be surprised to find out that as children, Harry was the shy and William the boisterous one when it came to the media. Sources on the inside as well as family friends help explain what the young princes went through when their parents eventually split and instead of taking sides between Charles and Diana, Nicholl focuses on their sons.
Of course, the untimely death of “the People’s Princess” also plays a role but gives way to happier chapters about William and Harry’s school time and respective gap years, and finally to William’s time at St Andrews.
It was here that he first met Kate Middleton, who now is his wife. While the book is called “Making of a Royal Romance” and does in fact give a lot of insight into the ups and downs of William and Kate’s relationship, it also spends quite some time focusing on Harry and his choices in life, especially concerning his military career, his charity work in Africa and his relationship with Chelsy Davy.
Nicholl also illuminates the young royals’ evolving role in the public eye and their relationships with their mother, their father and, especially in William’s case, with their grandmother, the Queen. She also explains the ups and downs the princes have had with the media.
Nicholls relies on many unnamed sources from inside the palace walls but also talked to many friends, co-workers and relatives of the Royal Family in order to paint a truthful and complete picture.
Including 16 pages filled with colorful pictures of William and Harry as well as their girlfriends and family, this book manages to give insight to everyone who ever asked themselves, what makes the Royals who they are and what they are.
And while Nicholl promises and delivers “a look behind the palace walls,” a little bit of mystery remains after reading.
But maybe that’s all for the best, since the mystery is probably what makes people so interested in the Royals.
Katie Grosser is a Senior Reporter for Youth Journalism International.