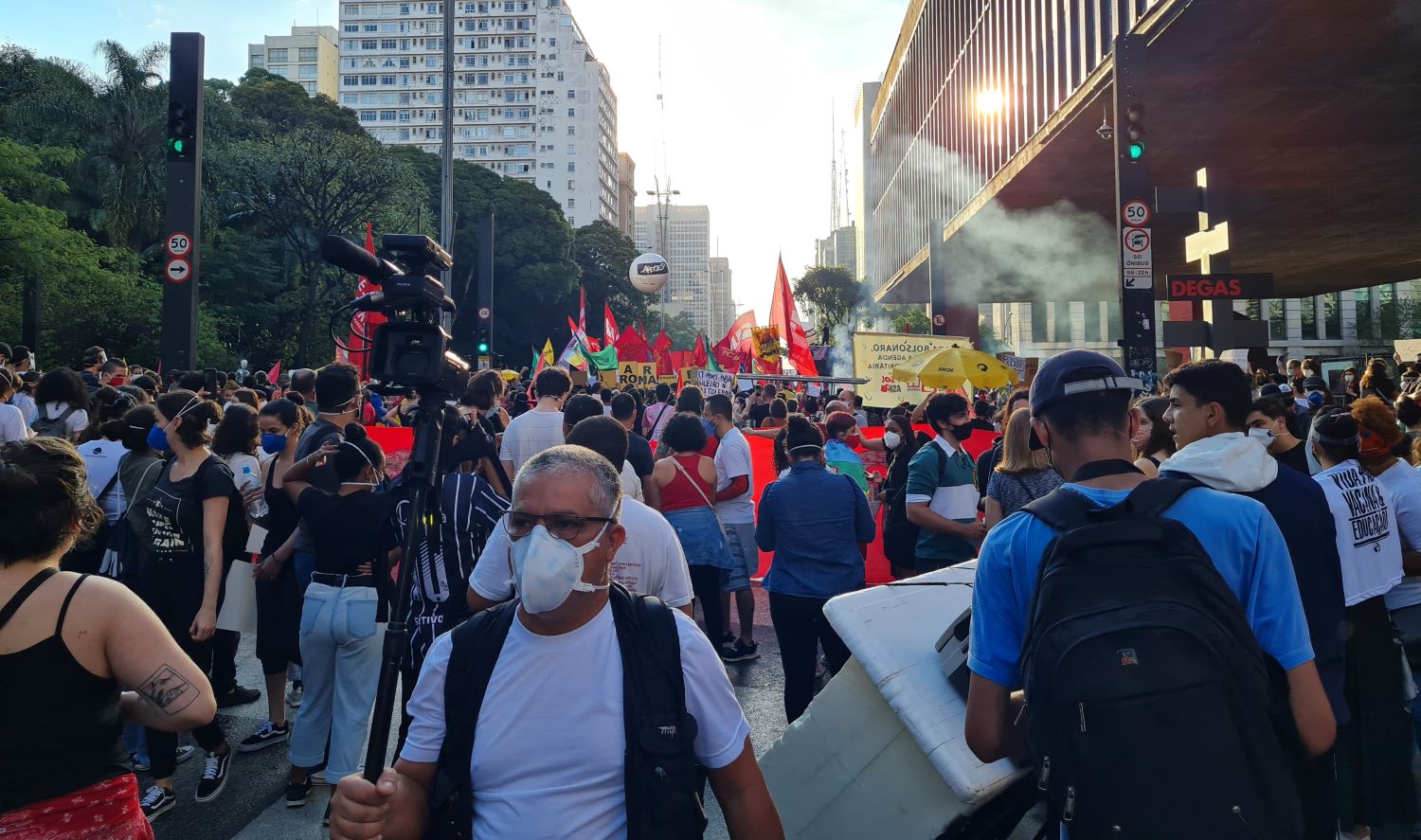 An anti-government protest on May 30 in São Paulo. (Beatriz Sgrignelli Henrique/YJI)

São Paulo, BRAZIL – With its response to the covid-19 pandemic, Brazil is one of the nations that is most at risk in the world.

Under the administration of President Jair Bolsonaro, Brazil lost a lot.

Bolsonaro, who came to power in 2018, promised to end corruption, but instead his government made huge spending cuts in essential areas such as education and healthcare.

As a result, healthcare began to erode even before the arrival of covid-19.

Ending the “Mais Médicos” program – which aimed to supply the shortage of doctors in the interior and on the outskirts of large cities in Brazil with doctors from other countries, like Cuba – had deadly consequences when the pandemic began.

The lack of investment in public health, like building hospitals and improving treatments resulted in the cases of covid-19, and deaths from the disease, in addition to illness and death from diseases that are still growing in the country.

According to Brazil’s Ministry of Health, the first covid death was March 12, 2020. After that, what Brazilian society saw on the news was a real genocide.

Without federal measures to control the disease, cities witnessed crowded hospitals, ICUs completely full and an economy collapsing with unemployment and inflated prices on imported products thanks to the devaluation of the national currency, the real.

In the beginning, Bolsonaro called covid “just a little flu.” He rejected a nationwide lockdown, saying such measures only made the poor poorer.

As a result, the void of political leadership during the pandemic was as big as the covid cases that were growing every day.

Also, the president of Brazil, who railed against social distancing and other safety measures, labeled as “tyrants” the state governors and mayors from the country who imposed lockdowns.

The circumstances here only got worse as the months passed without any medicine or vaccine to combat the virus.

Bolsonaro still falsely insists that chloroquine – medicine used to treat malaria – was valid, secure, and could, if used by people with covid-19, be an effective treatment.

Despite health officials saying that chloroquine does not reduce deaths or otherwise help a patient with covid-19, Bolsonaro’s government even created the “Chloroquine Kit,” a packet with the medicine to be distributed nationally.

When vaccine trials started, Bolsonaro doubted their efficacy and safety and said he wouldn’t get vaccinated. He joked the Pfizer jab may “turn people into crocodiles” and also said unforgivable things about CoronaVac, a vaccine developed by the Chinese.

Even with the vaccination campaign now in force, Brazil still faces more than 16 million people contaminated and more than 459,000 deaths, according to the World Health Organization.

Other sectors of Brazilian society, like NGOs, some members of Congress and even the judiciary are investigating Bolsonaro’s conduct regarding the national response to the pandemic. Among the many accusations against Bolsonaro are allegations that he passed on many opportunities to buy millions of doses of the vaccine.

The worst that Brazil is facing is neither political nor economical. The catastrophe is what Brazilian families are confronting. At least one person from every family knows someone who has lost someone to the virus.

The alarming situation in our overcrowded hospitals and the lack of respect for the virus – people holding big parties and not social distancing – is what kills, each day, around 2,300 Brazilians.

The lack of political leadership by a corrupt president has now killed almost half a million Brazilians.

But it’s only a little flu that can’t hurt anyone, right?