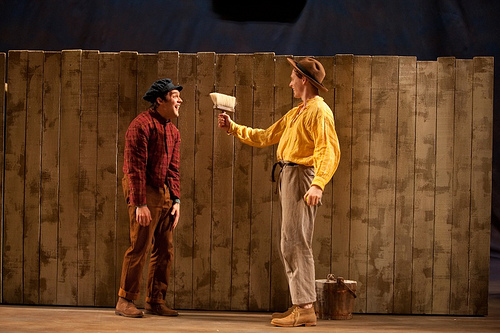 HARTFORD, Connecticut, U.S.A – In another fantastic production, Hartford Stage brought to life one of Mark Twain’s most famous books, The Adventures of Tom Sawyer.

Centered on a boy named Tom Sawyer and his adventures with his friend Huckleberry Finn, the play shows Tom’s struggle whether to keep a promise to Huck or tell the truth to spare an innocent man, Muff Potter. 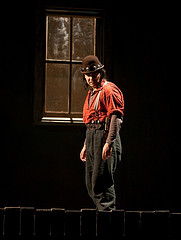 In the end, Tom helps Muff Potter and saves the man’s life.

The play, a world premiere adaptation by Laura Eason that ended at the theater Sunday, fulfilled all expectations.

Teddy Cańez did a great job playing the multiple parts of Injun Joe, the Minister and the fierce School Master.

The small cast as a whole gave an excellent performance, making do with only about 10 members. The original costumes did a first-class job of demonstrating the 1840s look. 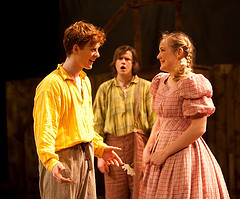 The show used only a couple of roll-on pieces of scenery, with Tom’s famous fence as the main piece on stage. The fence played many roles, among them being a barge and serving as an extension of McDougal’s Cave where Tom and his friend Becky Thatcher get lost.

Louisa Krause, who played Becky Thatcher, did a marvelous job expressing many drastic emotions throughout the play.

At the beginning, everyone was dancing and running around happily and Tom, played by Tim McKiernan, was swinging on a rope! Then, in the dark cave, the mood turned very gloomy and mysterious.

All throughout the play, Tom and Huck’s clever jokes got everyone laughing, but some moments were dark and frightening, with Injun Joe, his threats and scary, violent acts.

The show comes to an exciting end when Tom and Huck find Injun Joe’s treasure hidden in McDougal’s Cave.

Mary Majerus-Collins is a Reporter and Yelena Samofalova is a Junior Reporter, both for Youth Journalism International.