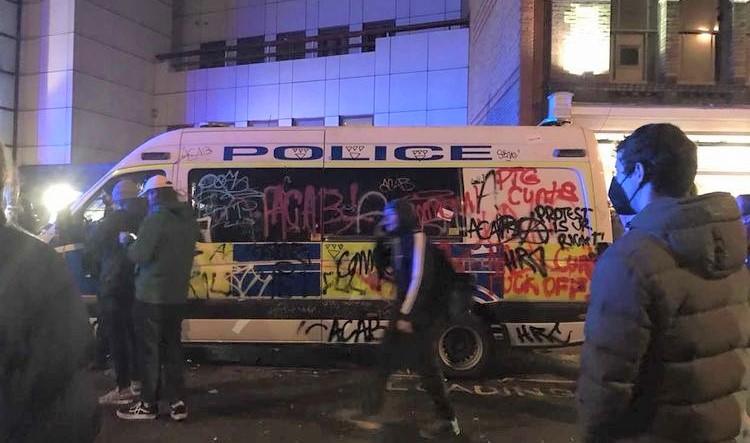 Bristol, ENGLAND – Protesters clashed with Bristol police in a Kill-the-Bill rally in the city center of Bristol on Sunday, objecting to a controversial new police, crime, and sentencing bill voted through the UK parliament last week.

After Parliament, the bill must go through a committee where it will be assessed and reported on, then to the House of Commons, where it will be debated again before there is an opportunity to change anything. But that process has been put off until later this year.

Hundreds of people had gathered at College Green in Bristol on Sunday before marching to Nelson Street and to the police station. Many of the demonstrators carried placards, saying “No Police State” and “Kill the Bill.”

Following the protest, police arrested eight people after 21 officers were injured, according to a BBC report. Police claim this number of arrests will rise in the next few days.

The controversial bill, if brought into power, could prevent the public’s right to a peaceful protest if the police deem it to be a “serious public disorder and damage to property to the life of the community.”

For some demonstrators, whose goal was to protest peacefully and protect their right to protest, the eruption of violence has left them feeling angry and frustrated. Their goal was to demonstrate that protesting can be peaceful and provide an example for other protestors.

But a handful of those involved now fear that due to the violence of a minority of the crowd, their message will instead be used to support the bill.

“The violence undermines the work of the peaceful protesters,” said Bristol University student Elsie King, who attended the protests. “Although rioting has its place, I think that it was too soon to have that sort of reaction and means the conservatives have more reason to try and push through their bill. I also witnessed some of the rioting from a distance and none of those who were attending seemed to have much interest in protesting the bill, they were just drunk and causing chaos.”

King said the media needed to make more of a distinction between the peaceful protest and the riot.

“I also think they need to acknowledge there was violence on both sides, with police attacking protesters who were simply sat on the road,” King said.

There have been rumors circulating online about police involvement in inciting the violence.

“It’s hard to tell,” said Anna Johnson, another Bristol University student who attended the protest. “ The police parked vans right in the middle of crowds and left them empty. I am not saying this was deliberate, but I do believe it played a role in encouraging a lot of the violence as it gave a small group of  extremists an opportunity to spray the van and light it on fire.” She said, “That is what started all the aggression and violence, and it all spiraled from there.”

Johnson said most of the unprovoked violence was not caused by protestors, but by extremists.

“Many of the people who started the aggression were members of antifa whose main goal was to cause a clash between us and the police,” Johnson said.

Home Secretary Priti Patel has played a large role in advocating for the bill, and therefore has attracted a large amount of criticism from some of the protestors.

When addressing the House of Commons on Monday, Patel mentioned the protest.

“I will work with everybody to make sure where the police need the powers to tackle the type of appalling criminality and thuggery seen in Bristol yesterday,” said Patel. “We will achieve that whilst absolutely protecting the right to protest peacefully in our country.”

Emily Fromant is a Senior Reporter with Youth Journalism International.

Emily Fromant is a Senior Reporter with Youth Journalism International from Bristol, England.