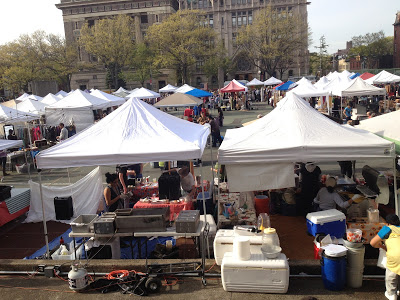 This flea market, which is located
between Clermont and Vanderbilt avenues, attracts a diverse crowd of people. As
far as the eye can see, people of all ages, neighborhoods, and personalities
roam the market munching on goodies or conversing with friends.
The Brooklyn Flea Market also
provides a range of products being sold, from typewriters to fruity flavored
shaved ice called People Pops.

Shoppers like Sunny Wang and Shannon
Roddey, immensely enjoy The Brooklyn Flea Market.
A Crown Heights resident, Roddey said
she comes to this market “probably once or twice a month.”
Roddey, who is an artist, said
“there’s a lot of inspiration” at the flea market.
“Everybody’s just looking to find
cool and unique things,” said Roddey, who said she personally enjoys “furniture
and interior design pieces.”
Wang used some of the same adjectives
as Roddey to describe the flea market. “Everything is very unique,” Wang said. “They
have cool stuff. It’s always fun to browse and find something special.”
David Lewis is one vendor who sells
the special things that Wang might have referred to.
Lewis is from The Good Fork and he
works with a few other people to sell “sliders … pork, chicken, and tofu,” along
with more food.
Food is a large part of the
atmosphere at this flea market and many people seem to like it.
Kinsley Edney from Australia remarked
that The Brooklyn Flea Market has “good food and drink.”
It was Edney’s first time at the flea
market and he had “read about it in Time
Out.” Due to complications with the subway, the flea market “was hard to
find but worth it.”
Lewis, who is at the market every Saturday, spoke on behalf of his
coworkers when he explained, “well, we love the neighborhood. It’s fun to watch
the people and gauge their reaction to our food…we like everybody. It’s a
wonderful community of people that come out here.”
Even at the end of the day when
booths began to close and night fell on Brooklyn, smiles could still be found
on children’s icy-stained mouths as they wolfed down a Raspberry Basil People
Pop.
After a long day of selling, buying,
socializing, and eating, The Brooklyn Flea Market still remains a very happy
and enjoyable atmosphere.
Lewis wrapped the entire flea market
into a neat, little sentence.
“It’s a nice day,” he said.