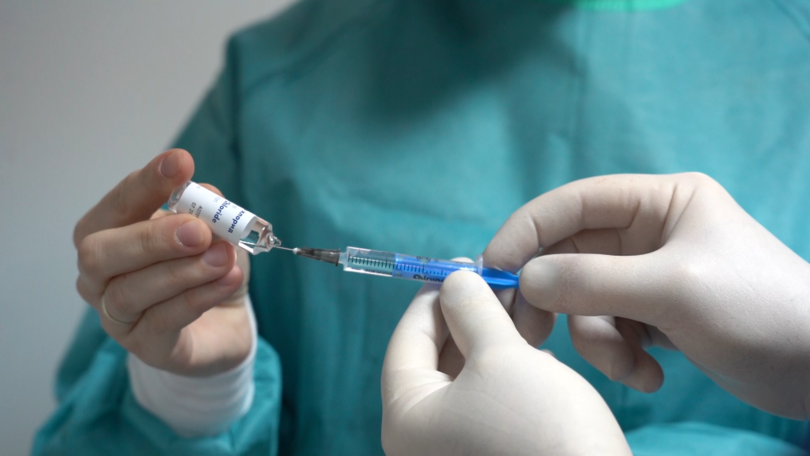 Many people are waiting for a chance to get the coronavirus vaccine. (Photo from the Bulgarian Ministry of Health.)

Ruse, BULGARIA – In the last days of 2020, Bulgaria received its first shipment of 9,750 doses of the Pfizer-BioNTech coronavirus vaccine. They were distributed to the six regions into which Bulgaria is divided for the purpose of the immunization campaign.

“I’m sure health authorities will do their best to conduct a wonderful vaccination campaign,” the Bulgarian Prime Minister Boyko Borisov said then during one of his streaming appearances on Facebook.

Authorities used a frankfurter bus – one that is used to deliver sausages – to bring the first vaccine shipment to different locations across the country.

That prompted a flurry of ironic memes on social media.

Not everyone was laughing, though. Handling a serious shipment of vaccines in such a manner could ruin the public trust in the authorities, says Maria Sharkova, an attorney specializing in health care told The New York Times.

Sharkova told the newspaper that the important thing is that the regulations for distribution and storage are carefully followed. Otherwise, the Bulgarian government could be responsible for problems that come from poor transport practices.

Minister of Health Kostadin Angelov, who was the first vaccinated person in Bulgaria, told a major Bulgarian TV station, bTV, that the frankfurter bus had met all requirements needed, and added that there was no reason for all memes on social media.

A week after, the second shipment with 25,000 doses of the Pfizer-BioNTech coronavirus vaccine arrived in Bulgaria, according to the Ministry of Health. Unlike the first time, no frankfurter truck was used because it arrived by plane in boxes full of dry ice.

The European Medicines Agency – the European Union authority in charge of the evaluation and supervision of medicinal products – said it has so far approved the BioNTech, Moderna and AstraZeneca vaccines.

But this week the BBC announced that the Republic of South Africa banned using the AstraZeneca vaccine because of the research which had shown it wasn’t effective against a new strain of covid-19.

Some European countries such as Belgian, Spain, and others also restricted immunization to people over 55 years old because there are not enough vaccines, several news agencies reported.

But the Bulgarian Ministry of Health said at its weekly briefing that it won’t restrict the use of the AstraZeneca’s vaccine.

All approved vaccines require two doses. If all of them arrive on time, the Ministry of Health said, they are expected to reach 4.4 million Bulgarians.

According to the Bulgarian health authorities, more than 70% of the Bulgarian population – about 4.9 million people – must be vaccinated to begin to slow the spread of covid-19 in the country.

Politico’s European edition recently reported that if Bulgaria continued with the current speed of vaccination, 70% of the population would be vaccinated in August 2040. According to the Politico, only 3% percent  would be vaccinated by the end of this summer.

The Ministry of Health said immunization in Bulgaria, with a population of about seven million, is taking place in five phases.

Others who will be vaccinated are the elderly and those with diseases that put them at increased risk of the virus.

As of February 10, 62.428 doses of covid vaccine had been injected, according to the data from the Bulgarian COVID-19 United Information Portal.

Covid-19 immunizations are recommended all over the world, and in many cases cost nothing to the person receiving the vaccine.

But half of Bulgarians – almost 46 percent – are skeptical about the vaccine and don’t want to get it, according to a Gallup International survey.

Only 30 percent of Bulgarians wish to be immunized, the Gallup survey said. Others are still wondering.

Lots of people still believe in conspirative theories regarding the genesis and spread of the virus, according to the Gallup poll. Some distrust the authorities and are upset that the pandemic isn’t strictly controlled enough.

Bulgarian government elections are coming on April 4, but there is still a lot of ambiguity regarding how they will be held.

Bulgaria ranks sixteenth for covid-19 death rates in the EU countries, according to the European Center for Disease Prevention and Control.