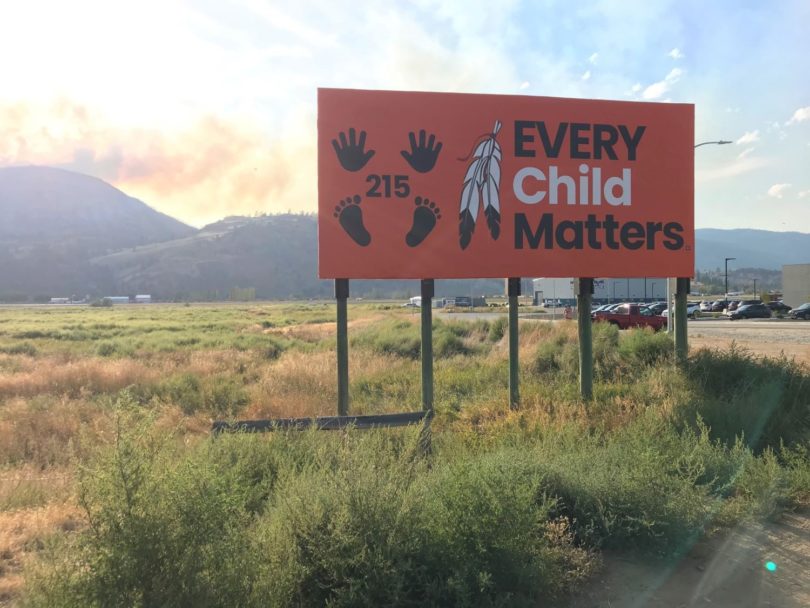 Delta, British Columbia, CANADA – This week, Canada will observe its first National Day for Truth and Reconciliation in recognition of the mistreatment of Indigenous people throughout its history.

Earlier this year, Tk’emlúps te Secwépemc – a group of First Nations people in Kamloops, British Columbia – discovered the mass graves of thousands of Indigenous children at the site of the former Kamloops Indian Residential School.

Kukpi7 Rosanne Casimir, the chief of the Tk’emlúps te Secwépemc, issued a statement about the “unthinkable loss” of the remains of 215 children found using ground-penetrating radar.

“Some were as young as three years old,” Casimir said.

These residential ‘schools’ have been a painful mark on Canadian history since the first was opened in 1831, and the scars have lasted longer than 1996, when the last was closed.

Canadian schoolchildren learn in social studies classes that those white settlers then sent the youth off to huge residential schools run by the Catholic Church with the sole purpose of assimilating them into Western, Christian ideas. Some were put to work in farm fields.

Treating children as savages, the white Catholics operating the schools stripped the children of their hair, which held symbolic meaning in Indigenous tradition. School officials also took away the children’s culture, languages, names, and humanity.

Residential schools were horrific places. According to the national entity Reconciliation Canada, 90 to 100 percent of the children kept in the schools suffered “severe physical, emotional and sexual abuse” during their time there.

Further, the mortality rate at the schools was a staggering 40 to 60 percent.

This horrifying number foreshadowed the news that broke in early June: a First Nations group discovered a mass grave of Indigenous children at the site of a former residential school in Kamloops, British Columbia.

After searchers then unearthed the remains of 215 children’s bodies there, the discovery prompted international outrage. It also unearthed fresh trauma for the Indigenous community. Many of Canada’s Indigenous people – some of whom survived their own time at these schools – found that they had unknown family members who were among the dead.

The gruesome discoveries brought up painful memories and inflicted new trauma on these survivors as well as their extended families.

The United Nations Human Rights Office launched a full investigation a few days after the discovery, setting in motion a thorough search at the sites of some of the 139 residential schools sites across Canada.

At this writing, the number of young bodies found is more than 6,500.

That’s thousands of children, cruelly stripped of their humanity and their lives, children that Canada forgot, at least for a while.

The grim discovery of the mass graves put Indigenous Truth and Reconciliation at the forefront of Canada’s conscience.

Canadian flags across the country were lowered to half-mast. Orange shirts, which symbolize recognition of Indigenous trauma, sold out.

Even Canada Day celebrations were canceled, with many believing it wasn’t right to celebrate a country when its Indigenous citizens were suffering from its wrongdoings.

Throughout the country, individuals, businesses, groups and athletic teams tried to show recognition for the atrocities and support for their Indigenous neighbors and friends.

On Thursday, September 30, Canadians will mark the first National Day for Truth and Reconciliation in Canada, the country’s newest statutory holiday.

The day honours the cultural and literal genocide of Indigenous people over the course of Canada’s history. Citizens will get a day without work or school to reflect on their country’s tragedies and shortcomings.

Many Canadians are likely to wear orange this week, the national color of reconciliation.

As Canada finally works towards Indigenous reconciliation, it is imperative that it mourns its failure as a whole, so that it may start to heal as a whole.

The National Day for Truth and Reconciliation is a great start.

Jaime Terada is a Junior Reporter with Youth Journalism International.