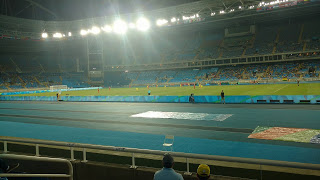 Only a small audience saw China claim its 2-0 victory at Olympic stadium Joao Havenlange, locally known as Engenhão. China dominated from the beginning of the game and scored goals after 46′ (45′ + 1′) of the first half and 87′ of the second half.

For the second game of the round, between Brazil and Sweden at 10 p.m, everyone had come to watch the classification of the Brazilian team.
With two goals from captain Marta Vieira da Silva Veiga, two goals from Beatriz Zaneratto and one from Cristiane Rozeira de Souza Silva – the top scorer of Olympic football (men and women) – Brazil played beautifully and easily won the selection 5-1 over Sweden.
Sweden’s goal came in the second half, at 89.’
Veiga – named the best women’s football player five times by FIFA – is – beloved in Brazil and known here simply as “Marta.”
Almost all of the crowd supported the Brazilian team. Cries of “Brazil,” “I am Brazilian with pride, with love” and the name of the players echoed in the stadium.
In addition to supporting the Brazilian women’s team, the crowd also had to tease the men’s team. At various times the stadium joined to scream that “Marta is better than Neymar,” referring to Neymar Jr., who wears number 10 on the men’s national team. Though they’ve played two games, the Brazilian men have yet to score a point.
At the end of the match, though, Brazilian fans gave a standing ovation to the players of both teams and remained in the stadium to celebrate their favorite athletes.

Mariana Prince Cardoso is a Reporter for Youth Journalism International.

The video with this story is temporarily unavailable.

Mariana Prince Cardoso / youthjournalism.org
Video from the women’s football match between Brazil and Sweden Sunday at the Olympic stadium in Rio de Janeiro.
***
Bring home the Gold for Team YJI!
Help amazing students tell their stories by making a tax-deductible contribution at:
HelpYJI.org