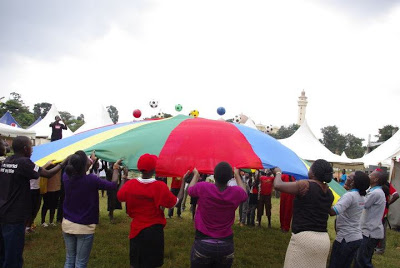 Organized by Open Space and various youth-led organizations in partnership with international groups that support youth activities in Uganda, the event focused on employment and kicked off by cleaning part of the slum of Kisenyi.
A team of youth led by “Kampala City Yange” members took charge of the cleaning effort in the slum in Mengo, part of the city of Kampala.

“The job of cleaning the city is tasked to Kampala City council authority, but they cannot do it alone,” said Isaac Rucci, director of Kampala City Yange, as he opened up the cleaning campaign at the youth festival.

Rucci, who called the cleaning effort a “great cause,” said the council needs support from responsible, local Ugandan citizen who want to see their city cleaned up.
Members of Kampala’s central parliament also attended, including Mohammed Nsereko and a Kampala youth member of parliament, Monica Amoding, as well as other dignitaries.

The festival proved a great platform for exhibitions, especially for organization that wanted to reach out to the youth in the areas of health, agriculture, entertainment and the environment, since it was open and free to all at Old Kampala playground.

There was also a live debate on youth issues from various youth stakeholders on the theme of employment for young people in Uganda that included representatives from international development and health organizations.

Young people at the event expressed dissatisfaction on the proposed youth fund by the government of Uganda that has failed to cater to the needs of the youth who wish to start their businesses. They said banks ask them for collateral securities which youth don’t have and called on the national government to revise the policy so youth can more easily access funds for small business projects.

Later, festival crowds were entertained by talented youth who challenged the members of the parliament to join them on the dance floor.


The festival also included crucial free counseling, testing for HIV and AIDS and guidance for youth on issues regarding sexual reproductive health by the Red Cross, Reproductive Health Uganda and the United Nations Population Fund.