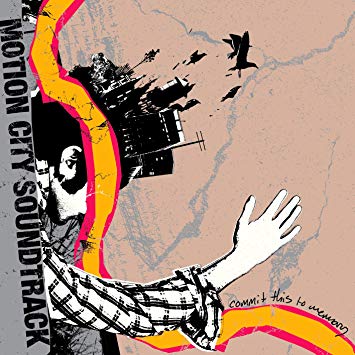 WARREN, Michigan, U.S.A. — You might want to commit Motion City Soundtrack’s old CD to memory, because its latest release is awesome.
The Minneapolis-based band has surpassed itself this time, with the all-important second album. Fans asked — and Motion City Soundtrack delivered.
The songs on “Commit This to Memory” flow together perfectly. Where one ends, the next one picks up, often on the same chord.
This makes for a more continuous sound and helps listeners to understand the mood the MCS was going for.
Although the songs are slower than I Am the Movie (2003), they still have the same energy that the band is known for. Fans lapped it up, complaining of only one thing: the lack of moog in many of the songs.
This is not an entirely bad thing, guys. It gives a chance for more of the other elements of the song to come through and shine.
For example, Tony Thaxton’s drumming will definitely get your toes tapping in the beginning of “When You’re Around” and Justin Pierre’s vocals, while always amazing, blend well with the guitars.
If you plan on comparing Commit This to Memory to I Am the Movie, don’t.
It would be like comparing apples to pears.
The sound is essentially the same, but Commit This to Memory is more personal. It seems to be more along the lines of Pierre ’s experiences put to music than five guys who wrote a bunch of songs about movies.
The group’s two albums feel alike in some ways and totally different in others. Just like apples and pears.
Arboreal fruits aside, Commit This to Memory is among the best albums I’ve heard. If you only listen to one CD this summer, this should be it.