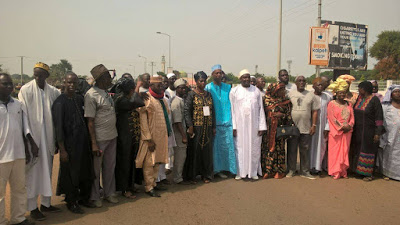 Members of a coalition of opposition parties hoping to unseat Gambian leader Yahya Jammeh in the Dec. 1 national election. (Abdoulie Jammeh/YJI)
SERREKUNDA, The Gambia – It’s been a year of major political upheaval in the world. Britain voted against the expectations of many to withdraw from the European union, and to everyone’s surprise, Americans voted for Republican Donald Trump to become its next president. The possibility looms that Marine Le Pen of the French National Front could soon win the presidential election in France.

Given that none of these were favorites in their respective countries, the upcoming national election in The Gambia is wide open.
The Islamic Republic of The Gambia, formerly The Gambia, is a small country in the world and in particular Africa. While this might make carefully following its elections less important to many people, for Gambians it is the opposite.
Many people here see the upcoming elections as a chance to vote for drastic change but others remain skeptical about who to trust with their votes. 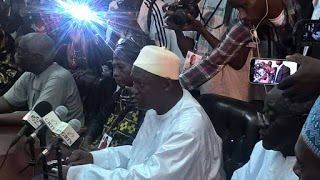 Adama Barrow, presidential candidate for the coalition of opposition parties in The Gambia. (Abdoulie Jammeh/YJI)

Gambians want someone to lead the country free from conflicts, tribal politics and violence after incumbent Yahya Jammeh, who ruled with an iron fist, clamped down on dissent and free speech. In his two decades of rule, he silenced opponents and jailed journalists.
Jammeh, who took the reins of power as a young army lieutenant on July 22, 1994 in a bloodless coup d’etat, has intensified his bid for a fifth term after 22 years of heavy handed, autocratic rule.
He came under pressure and tense criticism when he spat bitter remarks at a campaign rally in September against the Mandinkas, the largest ethnic group in The Gambia, describing them as racist and promoting tribalism.
Little did he know that inciting such violent sentiments could backfire or withdraw the support of the Mandinkas in his bid for re-election.
In a massive outpouring of support and solidarity, the Mandinkas have now put their weight behind Adama Barrow, formerly of the United
Democratic Party, the biggest opposition party in the country.
Barrow is leading a coalition of seven opposition parties as its standard bearer in the December 1 election. The coalition has massive
support from mostly Mandinkas  have formed the greater percentage of the opposition for years.
The jailing of the United Democratic Party leader and some executive members of his party brought about a massive turn against Jammeh.  Support for the newly formed coalition grew by the day, igniting hope among Gambians and the diaspora to unseat him when the country goes to the polls.
United Democratic Party leader, Ousainou Anm Dabo, a veteran politician and attorney, is serving a three-year term for peacefully protesting against electoral reforms in April.
Two other United Democratic Party heavyweights, Solo Sandeng and Solo Krumah, suddenly died from tortures and inhumane treatment inflicted while in state custody at the notorious National Intelligence Agency. 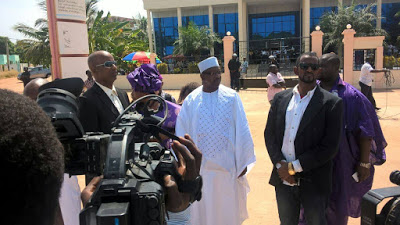 Mama Kandeh (in the center wearing a white robe) at his nomination as the presidential candidate for the Gambia Democratic Congress. (Abdoulie Jammeh/YJI)

A former member of parliament for the ruling party Alliance for Patriotic Reorientation and Construction, Kandeh and his Gambia Democratic Congress are hoping to get the top spot. Kandeh, who pulled out of the coalition at the eleventh hour over issues of transparency, has been drawing huge crowds in the campaign.
But the fast rising and hugely popular Barrow has the backing of thousands of sympathizers yearning for change in the nation’s leadership. He poses a potential threat to Jammeh, who has vowed to rule for a billion years if God wants him to.
What’s become more reassuring is the statement from the electoral commission saying the elections cannot be rigged and warning both candidates to maintain peaceful and violence-free conduct.
With just hours before Gambians cast their votes, the question that lingers in the minds of the electorates is, who would win? And, will Jammeh concede defeat should he fail to secure victory?
What remains clear to everyone is that the elections will be a tough contest and one that the whole world should be watching.
Lama Jallow is a Reporter for Youth Journalism International.
***
No matter what your political point of view, your tax-deductible contributions help give a voice to youth worldwide. Thank you for being generous.
HelpYJI.org