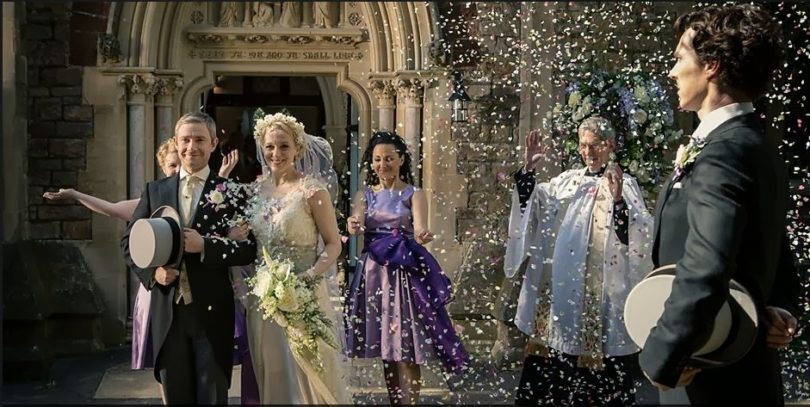 LAHORE, Pakistan – Sherlock Holmes has been out in the streets, solving crimes for centuries. The BBC resurrected the great detective as a 21st century super sleuth in the television show Sherlock.
After the tragic last episode of the second series that ended in a cliffhanger, fans have been waiting for the third season since 2012.  Sherlock Holmes had to jump
off a building in order to stop his worst enemy’s evil plans and save his friends – but survived.

The long-awaited show came back to the screens in the UK on January 1, 2014 and the third episode will air today.

The biggest concern for many of the show’s fans was how Sherlock survived falling from the rooftop of a building, and the reaction of his best friend and colleague, Dr. John Watson, who had mourned his death for two years.
In fact, sleuthing fans – taking clues from the show itself – developed many theories.
The third season’s first episode included some of the most famous and ridiculous theories in a series of possible ways Sherlock could have survived, but it turned out to be one character’s
imagination.
Holmes himself was back in London, ready to reveal himself, but before that he needed to visit his friend.  Watson, however, who was proposing to his girlfriend, didn’t welcome Holmes’ news that he was “not dead.”
Watson hilariously tried to kill Holmes multiple times in the episode for letting him grieve.
Then the duo were back to solving crimes together and found themselves in a train with a bomb about to explode the British Parliament. Holmes made Watson think that he didn’t know how to dispose of a bomb – which he had already done – and there was a vague flashback of how Holmes actually tricked the whole world into thinking that he died by jumping off the roof.
The episode had an overall comedic approach and it seemed that many of the scenes were based on the theories of the show’s fans.  Although it was nice to see the interaction between the characters and the introduction of new ones, it lacked what is really expected of a Sherlock Holmes show. It was too far away from the criminal drama that made the first two seasons so enjoyable.
This season’s second episode, “The Sign of Three” came out three days later and mainly starred Watson’s marriage.
Sherlock was best man, and during his speech solved another case. The episode focused on Holmes and Watson’s deep-rooted friendship. The parts involving the self-described sociopath finding himself in emotional situations and Watson’s bachelor party were extremely amusing. The sign of three included the appearance of Major Sholto, who has appeared in Arthur Conan Doyle’s novel The Sign of the Four but nothing besides the name was similar.
As a whole, the first two episodes were mainly comedy and disappointingly far away from the show’s main theme. They lacked what Holmes calls “the thrill of the chase, the blood pumping through your veins.”
As a fan, I was amused by and liked both episodes, but to someone watching it for the first time, it could appear boring. The mystery and thrilling plots that are classic Sherlock Holmes are missing.
However, I expect all of the mystery and excitement will return for “His Last Vow,” the third and last episode of the season. The word is that there is a new villain on the program based on the book character Charles Augustus Milverton, king of blackmailers.
I expect he will be quite cold and serious.
Milverton is featured one of Doyle’s short stories, where Holmes described that no murderer repulsed him like Milverton, who blackmailed women from wealth or position. “With a smiling face and a heart of marble, he will squeeze and squeeze until he has drained them dry,” Holmes said.
Hoping that this villain will be as loathsome as he is in the books, I am expecting an episode that brings back what the show so far lost this season.
The villain, who will be known as Charles Augustus Magnussen on the TV show, was shown at the end of first episode watching Sherlock in a video with an evil eye, while at Watson’s wedding there was a mocking telegram for the bride, an orphan, from “CAM” saying “wish your family could see this.”
Could the third episode have a lot more in store for the viewers? Holmes made a vow that he would always be there for Watson, his wife and their child. It is viable to say that Magnussen might target Sherlock’s friends in order to finish him, but I doubt that as that is exactly what was done by Sherlock’s enemy in the previous season.
It wouldn’t be a wrong assumption to say that the last episode has a lot in store for us, and it is worth mentioning the rumor that it might be a cliffhanger again.
But according to the great detective himself, it is a capital mistake to theorize before we have enough data, so all we can do is wait for today’s episode to find out what really happens.
Arooj Khalid is a Senior Reporter for Youth Journalism International.