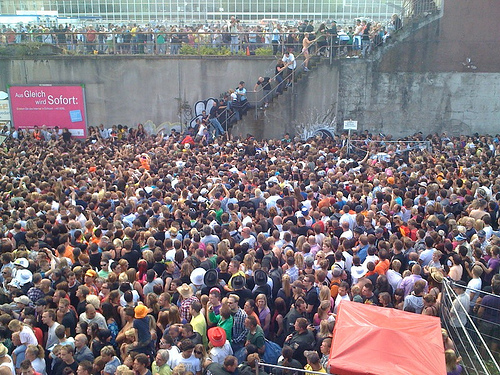 Duisburg, Germany – Partying at the Love Parade festival Saturday in Duisburg, Germany, Maya Argaman had no idea that not far from her, others in the audience were dying when the crowd stampeded.
In the outbreak of mass hysteria, the crowd trampled each other, crushing 19 to death and injuring more than 300, leaving Germans throughout the country in a state of shock and dismay.
“The festival site was higher up and we didn’t have a view of the tunnel,” where most of the people died, said Argaman, 20, of Essen.
Most of the crowd at the festival was also clueless.
“There was no announcement, no official information. I got a text from my mother, but we weren’t aware of the magnitude of what had happened, so we kept on partying,” said Argaman. “Everyone just kept on partying.” What should have been a day of music, dancing and fun – a celebration of love and peace – turned into a tragedy and sparked an investigation into how such a catastrophe could happen.
Officials are still trying to sort out the circumstances that led to the mass stampede. According to police, the festival site on an old freight yard was overcrowded, with about 1.4 million people crammed into a space suitable for only about 300,000.
To prevent even more partygoers from entering the site, the police ordered those who were still arriving to turn around and go back. The departing crowds then clashed with more people still coming into the tunnel, which was the only way in and out of the festival.
Police theorize that some people tried to jump barriers and climb a flight of stairs leading over the tunnel trying to get into the Love Parade despite the warnings – or simply to escape the increasingly pressing crowds.
When some of these people fell into the already-packed area around the entrance to the tunnel, mass panic ensued. People inside the tunnel started falling to the ground and others trampled over them.
The dead were men and women aged 18 to 38 and included visitors from the Netherlands, Australia, Italy, China and Spain.
Nina Wild, 21, of Stuttgart, was one of the fortunate ones, surviving a close call while trying to enter the festival. She and her friends were among those who hadn’t yet reached the tunnel when panic broke out in the frightened crowd.
“We were in the middle of a mass of people,” Wild said, “and somehow some people started panicking and, luckily, I got out to the side with a friend of mine. But some other friends were pressed further to the front and saw how others were smothered. It’s terrible – I still can’t believe it. We were really lucky that nothing happened to us!”
At first she didn’t realize the magnitude of what was happening.
“At an event like that, shoving and pushing just seems so normal,” said Wild. 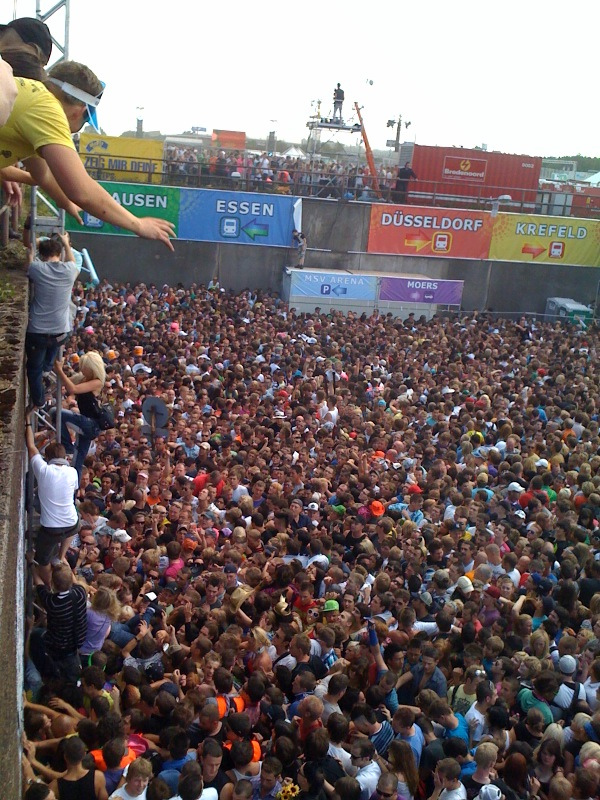 In the aftermath, questions are arising as to who is responsible for the tragedy.
Some blame the organizers. In the months leading up to the festival, there were discussions about the festival site being too small.
Some police and fire officials were quoted in German media prior to the event, criticizing the plan to use the tunnel as both entrance and exit to the festival.
Argaman visited the Love Parade for the first time on Saturday, entering the festival site about 45 minutes before the mass hysteria.
“When I went through the tunnel, there was already an unbelievable crowd, way too many people for its capacity,” she said. “It took us about two and a half hours to get onto the site.”
Without the crowd, the walk would have taken her about 15 minutes. Once on the site itself, she and the other partygoers didn’t notice the tragedy unfolding nearby. The Love Parade just kept on going as if nothing had happened. Only a few of the DJs knew what was going on.
Duisburg city officials decided at a crisis meeting to let the festival continue in order to prevent further mass hysteria and another stampede, according to city spokesman Frank Kpatschek. Officially, the Love Parade was supped to go until 1 a.m., but it was stopped shortly after 11 p.m.
“There were three critical problems,” Argaman said. “First, the site wasn’t big enough for the mass of people. Second, the tunnel was supposed to serve as an entrance and exit at the same time. And third, there were no emergency exits. There were fences everywhere. Even if you wanted to get out, you just simply couldn’t. There was no way.”
People trying to escape the masses later attempted to climb those fences, but the weak metal bent back under the weight, sending the people crashing into those still standing below.
Further problems ensued when the partygoers started leaving the site, often completely unaware what was going on. Officials created an emergency hotline, but the amount of calls coming in jammed the lines, making it difficult to get through. The same happened with the normal cell-phone network.
Concerned parents driving to the city to look for their children severely strained Duisburg’s traffic system and trains were canceled, leaving many stranded at the train station without any information.
“What bothered me especially was that the police wouldn’t give us any information about what was happening,” Argaman said. “The police really failed.”
Wild also criticized the event staffers.
“Everyone reacted way too late. They didn’t let the people out on the sides,” said Wild. “They removed the fences way too late. That was really bad conduct on their behalf with horrific consequences.”
But Duisburg Mayor Adolf Sauerland cautioned against making premature accusations.
Right after the tragedy, he rebuffed criticism of the approved safety plans for the festival.
“This didn’t happen because the safety concept failed, but most likely due to individual weaknesses,” said Sauerland.
Meanwhile, the office of the district attorney has started an investigation, confiscating the organizers’ documents.
Pressing questions, such as why the festival site wasn’t open as in previous years or why the tunnel was both entrance and exit, were not answered at any of the press conferences following the catastrophe. Police, city officials and organizers alike refuse to take the blame for what has happened.
One thing seems certain: This year’s Love Parade was the last.
At a press conference the day after the event, organizer Rainer Schaller put an end to any more Love Parades in the future.
“There are no words to express the extent of my sadness,” Schaller said. “We will do everything possible to help completely clarify the circumstances that led to this tragedy. The Love Parade has always been a peaceful event and a happy party, but now it will forever be clouded by the tragedy of Duisburg and will be discontinued.”
The Love Parade started in 1989 as a political demonstration for peace and international understanding through love and music. Held in Berlin until 2006, the Love Parade moved to the Ruhr area due to financial problems and tensions with city officials in the capital. Essen hosted the music event in 2007 and Dortmund in 2008.
The motto of the 2010 Love Parade, the festival’s 19th year, was “The Art of Love.”
But the scenes in Duisburg were grotesque, with people were dying only a few hundred yards away from other unaware partygoers.
The Love Parade website went black Saturday night, showing only a message in white letters that read, “Our wish to arrange a happy togetherness was overshadowed by the tragic accidents on 24th July 2010… Our sincere condolences to all the relatives and our thoughts are with all of those who are currently being taken care of.”