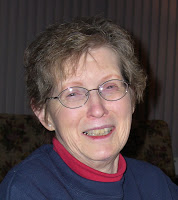 Youth Journalism International today lost one of its biggest cheerleaders.
Patricia Majerus, 81, died early this morning at the Cedar Valley Hospice Home in Waterloo, Iowa of the lingering effects of a massive stroke she suffered in September 2010.
Pat, mother of YJI executive director Jackie Majerus, provided steady support for the organization since its formation, rooting for its success and taking a genuine interest in the work of its students across the globe.
In the past 15 years, four of her dozen grandchildren have participated in YJI.
Born in Sheboygan, Wisconsin in 1930, Majerus lived in the Midwest most of her life, where she married and raised five children. Her husband of 52 years, Tom, died in 2001.
In the years since, she devoted herself to volunteer work in her Cedar Falls, Iowa community and to her growing family that stretches from coast to coast.
A forward-thinking, open-minded woman, she took a special interest in Youth Journalism International.
We feel lucky to have had Pat’s love and support as YJI grew from an idea into a legitimate organization with a worldwide reach. We will miss her mightily.