It’s 1 a.m. and I’m running down the street. The night is silent and crisp, and only the sound of my breathing and the crunch of leaves beneath my Doc Martens fills the air. Sweat rolls in streams from my temple and into my eyes, even though it’s October and freezing outside. My side aches and I can’t run anymore, so I stop at a corner, sit down on the sidewalk and pull my legs to my chest.

I don’t want to go home.

A gust of wind rushes through; an October wind, painful and cruel. The tree branches sway and a group of leaves move and dance in a circle with the wind nearby. I tilt my head upwards to the stars, to God, maybe to no one.

I want a reason, an answer to the question I haven’t asked.

Half an hour before, Tanner Salmon died.

I won’t lie and say we were great friends, because in truth, we weren’t. We were friends of coincidence, by pure chance. We hung out in the same spots, shared friends and occasionally went to Wal-Mart together — a Midwestern right of passage. 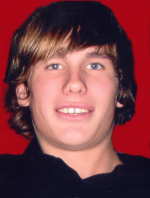 It was an asthma attack, sudden and massive. But at 12:30 on Friday morning we didn’t know that, and the news of his death crept through his body of friends like a gallon of invasive and toxic blood.

Suzy’s dad is their family’s pastor, and as Tanner was rushed to the hospital, he quickly followed.

We sat in Suzy’s family room: her, Eric and I, waiting for the news we didn’t hope to hear. Time seemed to suspend, and we could feel and hear our hearts beats inside our chests.

Half an hour later, we heard the car pull up into the gravel driveway and Suzy bolted for the front door as Eric and I followed. The door opened and for a second Monty Nelson was silhouetted in the dark hallway. He moved closer and put his arms around Suzy.

Eric moved first, and leaned against the wall as I fell on the couch.

It’s amazing how in an instant everyone in a room can become completely uncomfortable with other people being there.

Suzy walked us to the porch and for an instant we stood in awkward silence.

“Later,” I said, and started walking. Eric got into his car and squealed off into the opposite direction.

I’m sitting on the sidewalk and tears are rolling down my face, freezing on my cheek. I sit for a few more minutes and finally, I stand. I’m out past city curfew already, and my parents will be pissed if I’m late.

I pull my hoodie tight, and walk into the night.

“Damn, it’s cold,” Ben says and pulls his coat close to his body. He knocks his skateboard upright with his foot and skates to the edge of the corner, crashes, and for a second lies sprawled out in the street.

Mel laughs and pushes the hair out of her eyes. It’s nice to hear her laugh; she’s cried too much today.

In her right hand she clutches a picture of her and Tanner, sitting on a bench right before homecoming in her freshman year. She looks happy, and he looks kind of smug as he rests his arm around her shoulder. He was her first love, and even though their relationship didn’t last, she still held a special place in her heart for him.

“How ya doin?” I ask her as we stand on the corner of 12th Street, the theater marquee lighting the crystal night along with the flickering street light.

Scott, Ben and Ryan skate fiercely around us. When they crash they don’t mind the bruises and blood. They enjoy the pain, they relish it.

“Fine,” she says meekly. Her eyes are bloodshot and traces of tears are dried to her cheek. I pat her on the back softly. I don’t really know what to do.

Scott crashes his board and throws it down hard.

He’s taking it the worst out of all of us. While some of us deal with the pain through starvation or reserving ourselves, Scott seems to self-destruct. We’ve been here before, and with Scott you just have to wait for him to hit bottom because nothing can help him. The Prozac, the therapy, they deaden him, but they don’t take away the pain.

Scott grabs his skateboard and storms off. A few minutes later, we hear the screech of tires and know he won’t be back for awhile.

Thank God, I think. The entire day the city has sunk into a depression. When you live in a city of 4,000 and someone dies young, everyone knows, and everyone is affected.

“Yeah, I’ll come,” I tell Ben. It’ll be an excuse to get out of here, to feel real again. Ten minutes later a dozen of us are packed into three cars and we hit the road. Aurora and Tanner briefly move to the back of our minds.

I wonder if it’s okay to feel this sad, to grieve this much. I want to know if I’m being overly dramatic, or if I don’t seem like I care enough. I want to know if this is real, or if I’m just imagining it. I want to come into a room and not see someone crying and start to cry myself. I feel numb and tired, and on the way to Grand Island, I fall asleep in the car.

“I dig the grave tomorrow,” Chris says from the back seat of Ben’s car. We’re on the highway driving back to Aurora when Chris interrupts the silence.

“What?” Ben asks, and looks back at Chris, even though he’s driving. I turn down the stereo.

“I’m digging Tanner’s grave tomorrow morning. I asked to do it.”

Chris’s dad is the city’s cemetery caretaker, and for the past two years Chris has worked part-time digging graves.

After this we don’t speak, and I turn up the music.

True to his word, the next morning, Chris digs Tanner’s grave.

The alarm clock beeps and I open my eyes. Sunlight shines through the opening in my curtain and fills the room with light, and through the cracked window I can hear dogs barking outside.

I only went to sleep at four, crashing on my bed as soon as I got home. My clothes stink and hang limply on my body and my neck hurts from lying sideways on the bed.

I don’t want to go to work, but I get up anyway and put my clothing on. There’s no time for a shower.

Ten minutes later, I walk into McDonalds and my eyes burn and limbs ache.

“Did you hear about Tanner Solomon?” says Christina, who I often refer to as Stupid Oaf, as I start to walk past the grill area in the back.

“His name was Salmon,” I say and turn to her.

“Whatever,” she answers dismissively. “It’s really too bad he did something like that.”

I look at her, dismayed.

“Oh, you didn’t know,” she says. “He died this weekend of an alcohol overdose.”

I flare with anger.

“Don’t say another word,” I yell and point at her through gritted teeth. “You don’t know what you’re talking about and if you say one more word about Tanner I’ll walk out of here right now. I swear to God I will.”

My manager, Debbie, hears this and moves between us.

“Christina, be quiet! You constantly cause problems and I’m not gonna hear it anymore,” she says. “If you say another word, you’ll be outta here.”

Debbie pats me on the back, and leaves the grill.

“Screw your apologies,” I say as I walk to the back and hang up my coat.

Every time something happens in this town people do this — they create their own stories, their own truths, and spread them around.

I really hate it, I really do. I hate the people. I hate this town. I hate Christina.

The entire day we work side by side, but Christina doesn’t dare look me in the eye.

“You know, I think it would be easier for me to accept if it had been a stupid death,” I say to Jenny as we walk through one of our city’s parks on Sunday night. It’s one of those beautiful October nights, when the sky is so clear thousands of stars lay open to your eyes and the air is so clean and crisp it makes you cough.

“I know what ya mean,” she says and brushes the hair out of her eyes.

“I mean, I could understand if it was like a car accident or something tragic like that. Tanner was a daredevil. That would be his style.”

I fight back tears as Jenny pats me on the back.

“I know, I know,” she comforts. Jenny’s awesome that way; she’s never overbearing but completely understanding.

We sit down on a bench in the park and I watch the leaves blow past in strides of life, before dying with the wind. Jenny puts her arm around my back and rubs my shoulder and I cry. I really, really cry.

The funeral is held in the Methodist church, even though Tanner’s family is Protestant, on the morning of Halloween.

As people fill the church, music plays over the sound system — real music, not the hymns usually played at funerals. It’s music like Sugarcult and Hawthorne Heights. It’s Tanner’s type of music.

At the funeral, Scott speaks through red eyes and streaming tears. I admire him and I admire Chris. They’re strong, at least stronger than I am.

As I go home, I drive past the skate park, one of Tanner’s favorite places, and see that someone has written TANNER WE MISS U in the chain link fence using paper cups.

In the past four days I have learned that life is amazingly beautiful and short at the same time, and that the real tragedy of death is that some may never actually have lived their lives.

As we drive past I turn my head and look at the fence one last time, and silently, I say my goodbye.