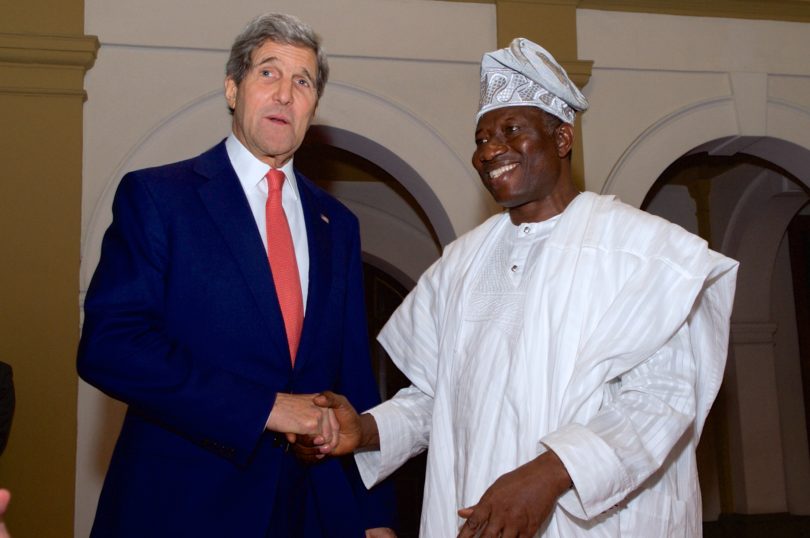 Nigerian President Goodluck Jonathan with U.S. Secretary of State John Kerry (US Dept of State photo)
ENUGU, Enugu State, Nigeria – It’s not every day that one wakes with a deep sense of trepidation hanging over the very air one breathes.
Some days, one wakes to a beautiful morning laced with happiness and goes to bed in the same mood.

We’ve been glued to the TV for two days now, doing nothing but mathematical additions to figures reeled out by the Independent National Electoral Commission – the commission saddled with conducting elections in Nigeria March 28 and 29.
We all felt the tension and tasted the anxiety in the atmosphere. We felt, in no small measure, the panic, worries and joys that characterize the anticipation of the outcome of something as significant as our nation’s presidential election.
Delay could be dangerous, and anything dangerous could be catastrophic.

Now, after two days with eyes feeding from the screens of different TV channels, the results are out. We needn’t wait anymore.
Incumbent President Goodluck Jonathan’s People’s Democratic Party, which has ruled Nigeria for 16 years, lost in a close race to the challenger, General Muhammadu Buhari’s All Progressive Congress.
Buhari, a military ruler in Nigeria from January 1984 to August 1985, won in 21 states. Jonathan took the lead in 15 states and the Federal Capital Territory, Abuja.
The other 12 candidates scored an insubstantial number of votes.
Jonathan will become the first sitting Nigerian president to lose an election, and Buhari will remain the first opposition candidate to win the presidential election.
How the defeat came about isn’t what matters at this moment.
I take great pride in seeing Jonathan congratulate Buhari for winning the election. That’s how things should be.
It hurts to see Jonathan go. Though I had problems with the manner in which he tackled key issues, I became enamored with him right from when he emerged as the country’s vice
president in 2007.
When I pore over stories about his meteoric rise to fame, I get motivated to continue to strive for excellence in all my endeavors. Much as I wanted him to stay, the vast majority of Nigerians whose votes reflect the opposite favor a change of government.
It gladdens my heart to see the president accept defeat wholeheartedly. It’s a testament to our deep-seated belief that he is a stickler for democracy.
Buhari will assume power on May 29 and we will stand with him at all times. In times of difficulty and suffering, sorrow and pains, anguish and tears, victory and exhilaration – we shall never let Buhari down.
He’s assured of our loyalty and trust. Terrorism, education, health, endemic corruption, unemployment, economic mismanagement – all of them ail Nigeria.
I can’t merely wish away the ravages of Boko Haram. I won’t forget the more than 200 schoolgirls kidnapped by the dreaded terrorists a year ago.
We have what it takes to overcome all these anomalies, and you, Buhari, shall lead us through a path strewn with denial, selfishness, bribery and hardship.
For you, Jonathan, your name shall be etched on my mind. In our history books, you would come as a hero to some Nigerians, a weakling to others and a feckless leader to critics.
Go and never regret your choices, for neither past nor present realities condemn you.
Linus Okechukwu is a Correspondent from Nigeria for Youth Journalism International.
***
Your tax-deductible contribution can help support this nonprofit at
www.HelpYJI.org 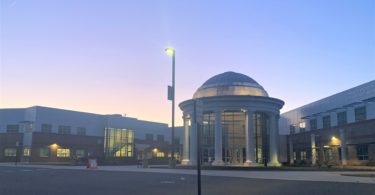