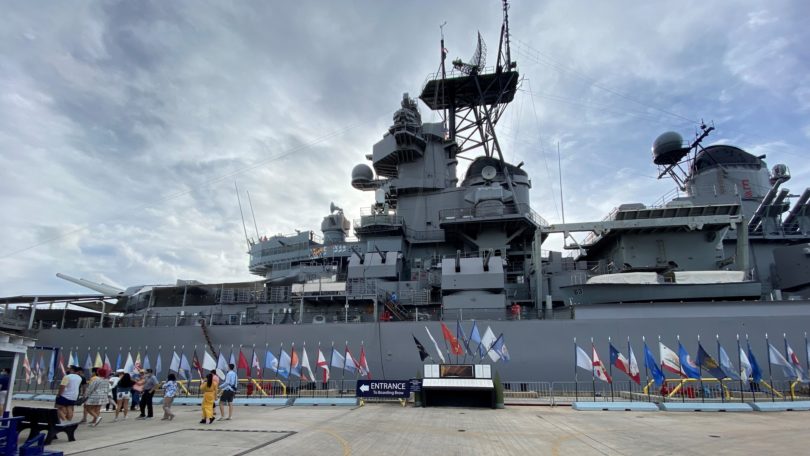 PEARL HARBOR – As a self-proclaimed history nerd, I was thrilled to have the opportunity to visit the Pearl Harbor National Memorial Site in Honolulu, Hawaii during the 80th anniversary of the attack.

On December 7th, 1941, Japan shocked the world with a surprise military attack on the U.S. military base on the Hawaiian island of Oahu. This infamous event eventually propelled the U.S. into entering World War II.

Upon my arrival at the site, the number of people of all races and nationalities visiting the site blew me away. Seeing an “old” place come to life propelled my excitement even before I entered the memorial site.

The first piece of history that I visited was the U.S.S. Missouri. This naval ship took no part in the Pearl Harbor attack but was later commissioned in 1944 to fight in the Pacific. Most importantly, this is the ship where WWII officially ended as Japanese and American leaders signed the documents of the Japanese surrender.

(Story continues below the video.)

The Missouri is astonishingly huge. In fact, I was able to see a lot of Oahu itself by standing on the top deck. It took me around three hours to cover the U.S.S. Missouri, given that I frequently stopped to read historical plaques full of insightful information. The ship has five different levels and numerous stairs. Even the dining halls and kitchens are massive.

Strolling along on the deck of the ship, I came across some footprints. According to the historical marker, at that very spot, a Japanese Kamikaze plane accidentally struck the ship in April, 1945 in the waters off the coast of Okinawa, Japan.

Now, that’s the kind of history you do not always learn about in school.

It was surreal to stand on the deck where American and Japanese military leaders signed the papers that ended WWII.

Next, I visited the Pearl Harbor Aviation Museum. This museum – a warehouse in the 1940s – contained numerous documentaries and aircraft, not to mention many more plaques full of historical information.

The warehouse still had bullet holes in the glass of the doors shot from Japanese planes during the Pearl Harbor attack.

Both the U.S.S. Missouri and the Aviation Museum are on Ford Island. This island was also a part of the Pearl Harbor attack. All of the island of Oahu was assaulted, contrary to what is often believed, that just the naval base on Oahu was attacked.

I then visited the U.S.S. Bowfish, a submarine that fought in the Pacific during WWII. This submarine was commissioned on December 7th, 1942, the one-year anniversary of the Pearl Harbor attack and remained active until the end of WWII. In comparison to the U.S.S. Missouri, the Bowfish was tiny and could not hold as many people. The dining hall and kitchen, however, still took up a large portion of the submarine.

Back at the welcoming center of the Memorial, I glided from plaque to plaque reading various fun facts about aircraft, and, most importantly, soldier memorials. Around me, both younger and older people did the same.

Learning about history from a textbook is one thing, but experiencing it in front of your own eyes creates indescribable appreciation and new meaning of any historical event.

I recommend a visit to the Pearl Harbor National Memorial site to anyone, even if you might not be a history buff like myself. You inevitably will walk away with a new appreciation of December 7th, 1941.

Norah Springborn is a Senior Reporter with Youth Journalism International.