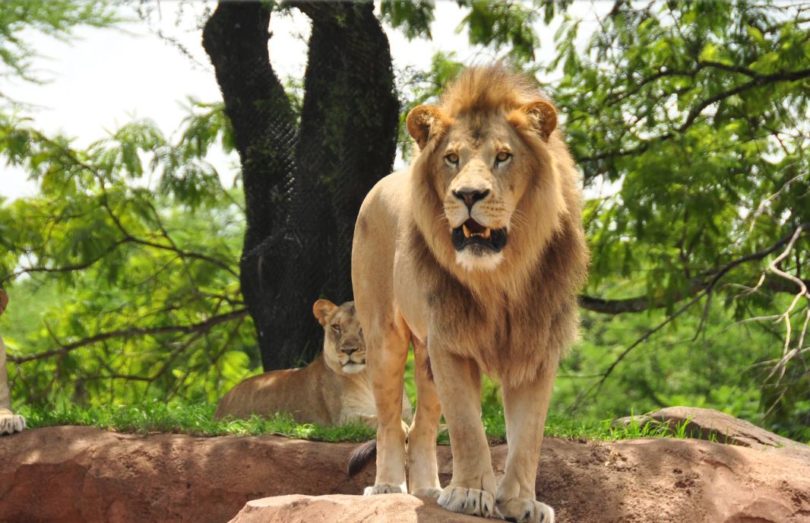 ORLANDO, Florida, U.S.A. — They ought to call Disney’s new Animal Kingdom the Lovely Park of Death.

Despite the publicity, the park is really just an extra-large zoo without cages. The park’s main claims to fame are that it’s divided into different sections, each showing a different part of the world, and the animals are in their natural habitats.

After hearing all the stories about the animals that died in the park, I went with my family to see what it was really like. The smaller animals, like birds, monkeys, and lizards were in their own little areas.

Instead of the natural barriers and wide open spaces the park promised, I found wire fences separating me from open areas no larger than the average zoo cage. These animals weren’t as exotic as I’d thought they’d be.

For the most part they were the animals most zoos have.

After this disappointment, I went to see the Lion King show.

This is the one thing in Animal Kingdom that everybody knows about. It’s also the one thing in the park that I think is worth seeing. The costumes, audioanimatronic floats, acrobats and music were great.

To top it off, this show is one of the few attractions in the park that doesn’t involve animals.

One of the other shows in Animal Kingdom involves trained birds flying around an outdoor stage, performing tricks on command. The highlight of this show is the tropical bird that sang two or three songs.

Call me crazy, but I don’t think birds instinctively know how to sing “Camptown Races.”

So much for natural setting promised by the park. One of the other main attractions at Animal Kingdom is the safari ride. This is an open tram that travels through an incredibly large area, which is decorated to look like various natural settings.

This ride is supposed to allow visitors the opportunity to see animals in their natural habitat. Unfortunately the animals were hard to see, and there weren’t any of the close up sightings that Disney publicized.

My next stop was the petting zoo which advertises unusual animals. I thought that would be cool so I got on the train to go there.

On the way, the train passed numerous concrete buildings with few windows, surrounded by fences. These, our prerecorded guide told us, were where the animals were housed and fed at night.

This was not quite the natural habitat Disney’s advertising led me to expect.

Before going to the petting zoo, I walked through a building that, among other things, showed how the animals were cared for at Animal Kingdom.

The area that showed how the animals food was prepared displayed dishes of mealworms and various sizes of rabbit pellets. When I asked the man in charge if all the food was based on the animals’ natural diets, he looked at me and informed me that he just made the food, he didn’t know what it was based on.

Assured that the animals’ diets were in fairly incompetent hands, I continued through the building.

I passed the room that showed where animals were nurtured, and found that the park doesn’t usually allow the mothers to care for their own young.

Once again, I wasn’t seeing the natural setting that Disney had promised me.

The next thing I saw completely floored me.

There was an open operating room, complete with a television showing close-ups of the surgery. While I watched, a bird that had just arrived at the park had part of its wing clipped to prevent
flying.

This wasn’t your average pet owner feather clipping, this was actually cutting a muscle or nerve.

One of the staff members who must have seen that I wasn’t too pleased with this scene, came over and assured me that the operation only prevented long distance flying. She also informed me that
this type of flying wasn’t necessary because the birds are caged at night.

Needless to say, this information didn’t comfort me.

After being traumatized, I finally reached the petting zoo. Animal Kingdom’s idea of unusual animals turned out to be mostly baby goats.

My final stop at the death-ridden family attraction was Gorilla Falls. This is really just a large path that winds around for a while through a bunch of trees. There were a lot of little birds flying around, and a small building with a glassed in colony of naked mole rats.

Finally, I found the gorillas in Gorilla Falls. That proved absolutely the saddest sight I saw in the entire park.

There was a mother holding her little baby while it slept. It would have been cute, except she was pushed way back into the dark corner between the glass wall and the rest of the gorilla area,
while all the tourists tapped on the glass and gawked.

The one thing I learned from my trip to Animal Kingdom was that not even Disney can make a humane zoo, no matter how they publicize it.