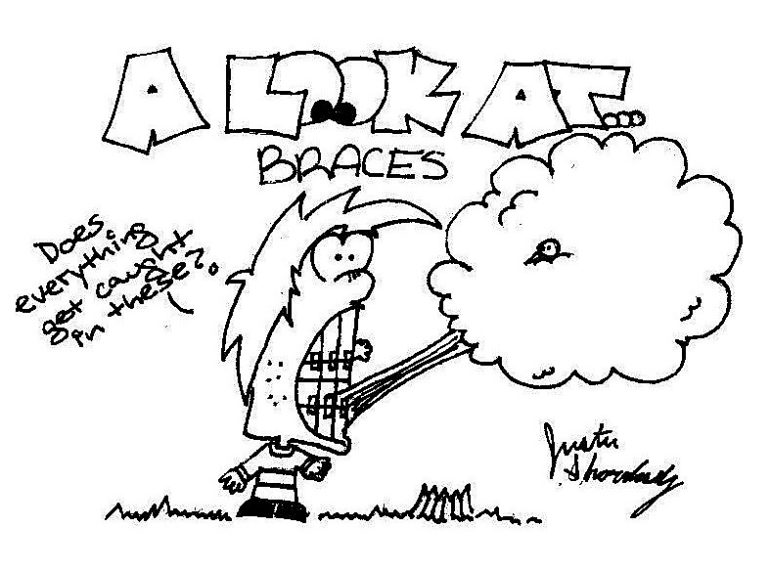 WEST HARTFORD, Connecticut, U.S.A. — I’m a metal mouth now. Well, not really – I only got braces on the top of my mouth.
I actually only got three brackets, but the rest are yet to come. In fact, I’ll have my bottom braces put on the day before Thanksgiving. What fun!
I was all worried about finally getting them on and wondering if I might have to get teeth pulled. But now that I think about it, the most painful part was not having the wire put in or even getting the bands put on.
The most dreadful part was watching the movie that would prepare me for getting braces.
The movie was called “Smart Mouth!” and it was in the format of a game show that had two nerdy looking kids on it who were supposedly going to get braces – even though they had perfectly straight teeth – and they had to know all about how to take care of themselves.
The host was named “Jack Smiley” (very original). The “informational” video lasted for about 45 minutes, which meant that I had missed advanced math and advanced language arts, so it wasn’t a total loss.
The first step to getting my braces put on was taking the spacers out (Halleluiah!) and cleaning my teeth with this weird powder and some water.
After cleaning my teeth, they used some foul tasting adhesive to stick some brackets onto my three top front teeth.
When I ran my tongue over the brackets, I shuddered. It felt really weird and sharp.
Then they found the right size bands to put around four of my molars to hold the wires in place. This was the most painful process because it was done multiple times.
He put the band on. Too big. He put a smaller one on. Too small. He finally found one that worked.
One of the four teeth he put bands on was right behind a tooth that has been loose since last summer.
I cried out in pain, or maybe anger. Either way the orthodontist didn’t seem to care.
Each time a band was put on, it hurt, all at different levels of pain.
I guess you could say they each hurt in their own special way. What made me the most furious was the fact that after he put them on, he took them right off again.
“That was just to see which bands were the right size for your teeth” he said, in a matter-of-fact tone.
So he put them on again, this time with super foul tasting adhesive on them. The orthodontist said it tasted like Sour Patch candies. What a great combination: bad taste and pain!
I was relieved when the bands were finally on, but I knew there was more to be done before they let me out of the torture chamber.
Like an executioner selecting his weapon, the orthodontist then went about choosing the lethal wire that he would attach to the bands and the brackets.
Although the wire being put in hurt the least, it was going to be the one that would later cause me a lot of pain.
The first time I got a chance to see what I looked like was when I got home from school.
It was a good thing I chose emerald for the color on my brackets because it didn’t look that bad.
I was also thankful that I didn’t end up getting a speech impediment and start mispronouncing words, like “thith” for this, or “toof” for tooth.
The wire pulled on my teeth hard for the first couple of days that I had braces and I got another headache. Then the wire didn’t hurt anymore.
A piece of the bottom band on the left side of my mouth jutted out and my tongue rubbed against it and got cut every time I swallowed.
For I while I couldn’t eat at all, and I couldn’t even drink without my tongue throbbing.
Now it still hurts a bit, but not as much.
In case you were wondering about the ancient loose tooth … let’s just say if it doesn’t come out before November 22, it gets yanked!

Wesley Saxena is a Reporter for Youth Journalism International. See an earlier journal about braces from Saxena here.