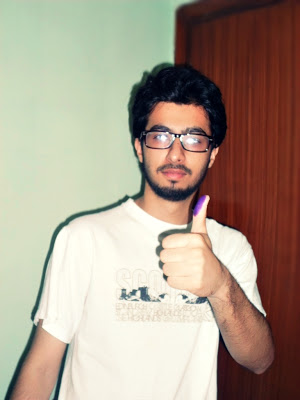 YJI Senior Correspondent Waleed Tariq shows off the purple ink on his thumb that indicates he voted in Pakistan's elections today. (YJI)
KARACHI, Pakistan – National elections are today in Pakistan and it will be the country’s first transfer between two elected, civilian governments.

Karachi, like many other parts of the country, is witnessing large number of young people going to exercise their vote for the first time. Similarly, I voted for the first time today and it felt amazing!
After paying attention and getting informed about the candidates all these years, nothing felt better than to walk across to the polling station, use the stamp and vote.
Pakistan is a federal republic where parliamentary elections take place every five years. We have national and provincial assemblies, and the party with the majority of seats is invited to form the federal government at the center and choose the prime minister.
Out of 272 National Assembly seats, a ruling coalition has to have a simple – more than half of the seats – to form the government.
Voting is on till 5 p.m. today, and unofficial results will start coming in as soon as the counting begins.
It’s so empowering to know that your voice is counted.
I hope everyone takes time out to vote in Pakistan.
Editor’s note: Election Day in Pakistan has been marred by violence, including a morning bombing in Karachi that killed at least 11 people, according to The New York Times. The paper said the attack followed the Taliban’s threats to send suicide bombers across the country.
Waleed Tariq is a Senior Correspondent for Youth Journalism International.